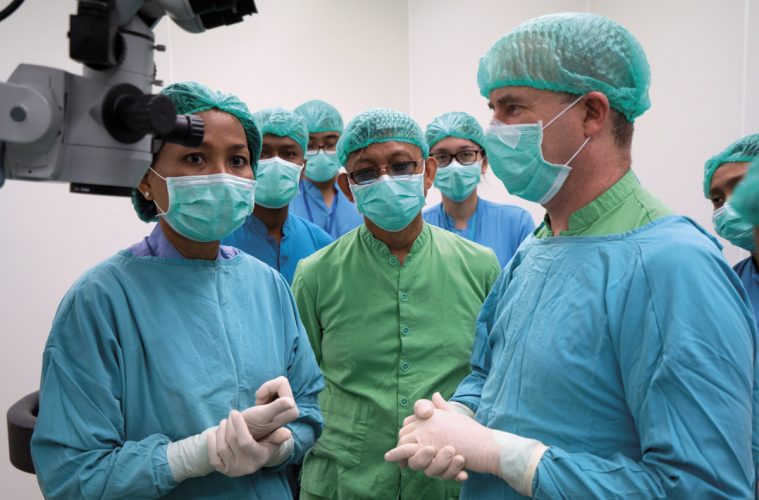 A Deeper Way of Seeing 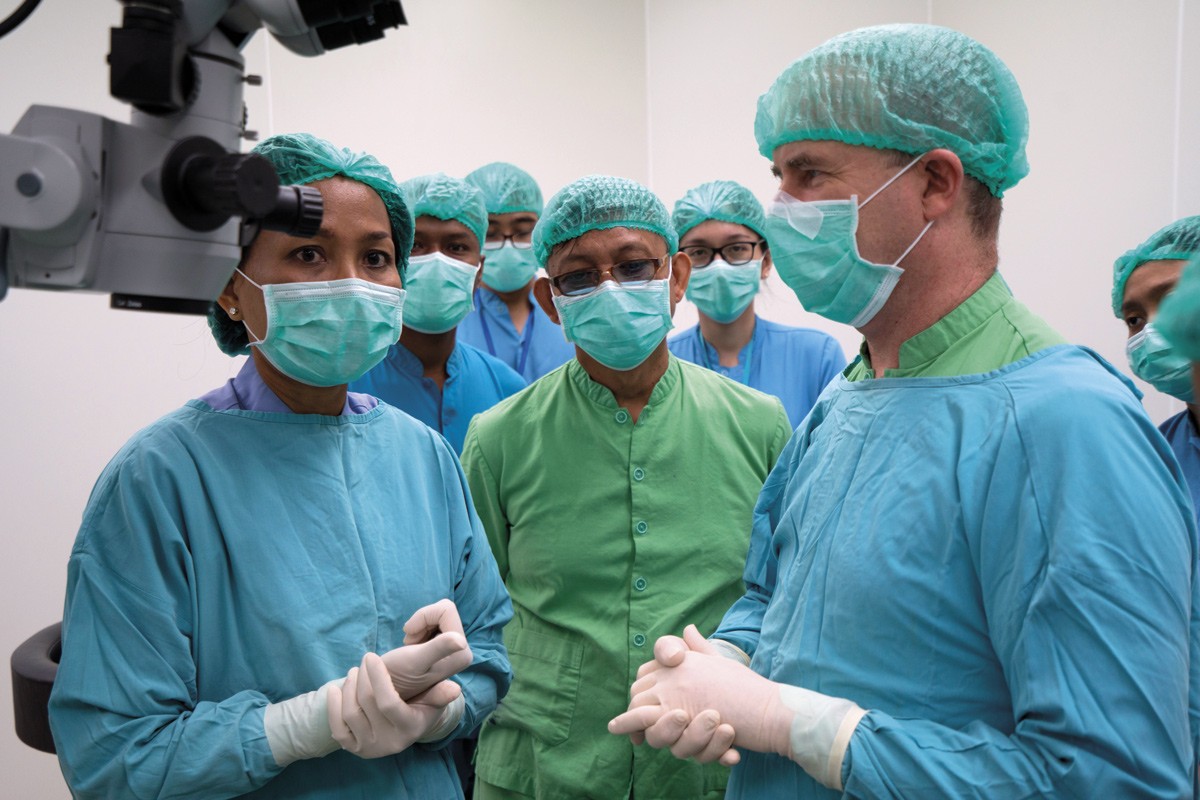 Helping to restore sight has been Prof Bill Morgan’s lifetime ambition that has seen him work in state-of-the-art labs and in Bali villages.

Ophthalmologist Prof Bill Morgan has one eye on improving the sight of his fellow West Australians and the other on helping train doctors in Indonesia to attend to the many thousands of people there who need sight-saving interventions.

Bill’s first experience of Asia came just after graduating from his medical degree when he decided to take time off to explore the diverse peoples and cultures. Along the way he also formed deep ties with Indonesian universities and the health care system, a bond which saw him return regularly to teach, operate and foster relationships between WA and Indonesian ophthalmologists.

A fortuitous term of ophthalmology during his studies piqued his interest in the speciality.

“At that time, modern cataract surgery was just coming in and it was evident what a huge difference it was making to the quality of life of patients, so I became hooked,” Bill told Medical Forum.

Witnessing his grandmother lose her eye sight to glaucoma was a motivation for his to sub-specialise. After starting his PhD around 1993 and finishing his specialised training in 1994, Bill started up a private practice at the Lions Eye Institute (LEI) around 1995.

Around this time LEI boss Prof Ian Constable asked Bill to accompany him to Surabaya in Indonesia to do some teaching and demonstration surgery. “I immediately liked Indonesia and the people there. I met a number of ophthalmologists and you could tell they were very keen to learn and there was great need. Glaucoma is about 10 times more common in Indonesia than it is here in WA, and much more severe as well.”

So Bill’s interest in the condition, and it being so prevalent, meant Indonesia was never far from his mind.

“I came back from that trip stimulated but I had a young family, so I was quite limited in how much travel I could do and didn’t return to Indonesia for around eight years when I was asked by the Fawcett Foundation to help out.”

“There is more angle closure and open angle glaucoma in Indonesia. Broadly speaking there are two main categories of glaucoma, one where the angle is open, which is part of the eye that regulates pressure and allows the fluid to drain; and the other is closed angle. In that situation, the glaucoma tends to be more aggressive and nastier and that’s much more common in Indonesia for various genetic reasons.”

“That’s one of the areas of research we are focusing on at LEI. On the ground in Indonesia, the reality is that patients usually present very late in the course of the disease, often with a blind eye and relatively poor vision in the remaining eye and it’s a  much more difficult situation to treat without causing problems.”

Bill went to Bali for the Fawcett Foundation first in 2002 where he worked in mobile clinics and mobile operating theatres.

“I did quite a lot of surgery, teaching and saw a lot of patients but also met a lot of people and then decided it was something that I really wanted to do consistently and I have since visited Indonesia at least once or twice a year. 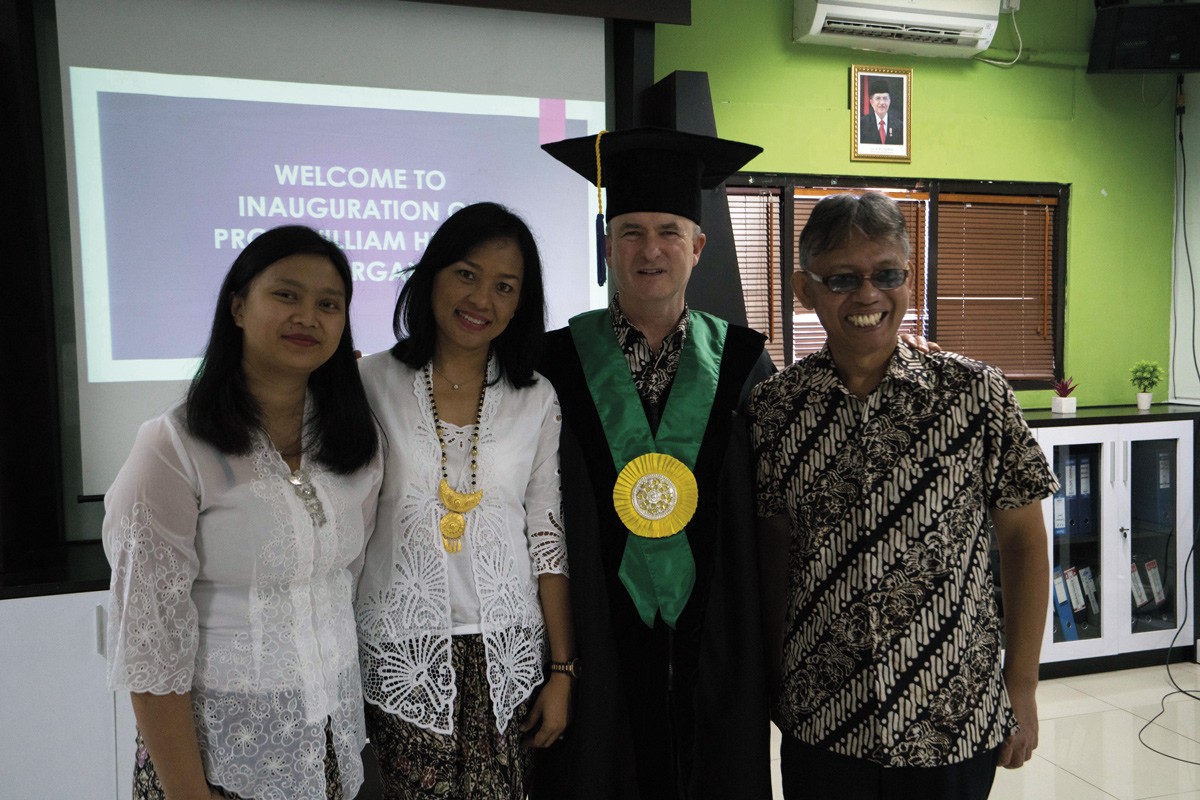 On one of his trips to Bali, Bill met Dr Oktarina, a young doctor from Jakarta, who came to Perth to complete a fellowship with the LEI and Royal Perth Hospital. She was keen to work on a research project that would have significance for her country.

“We talked a lot about what could make a difference,” Bill said. “The issues back then still exist – that most patients present fairly late and the standard eye drop treatment does not work very well. Many patients also need surgery but the standard trabeculectomy often fails within a few years leaving  a glaucoma drainage device being the only sight-saving option.”

“This is a plastic device we implant in the eye. The current glaucoma drainage devices cost about $1400/$1500, which is clearly beyond the reach of the average person in Indonesia. So we decided we’d design and build our own that would fit Indonesian eyes better, be easier for surgeons to insert and cheaper to manufacture.”

“So that was the nuts and bolts of Dr Oktarina’s PhD. Now in the last 2½ years, Dr Oktarina has surgically implanted about 280 of these devices, which will be released nationally in probably July at a tenth of the standard price.”

“It will make a tremendous difference. Dr Oktarina, has already taught the technique at about eight centres across Indonesia.”

Dr Oktarina is just one of many Indonesian ophthalmologists to have come to Perth to complete fellowships with glaucoma specialists at the LEI.

Bill sees the relationship between WA and Indonesian ophthalmologists as mutually beneficial.

“Their medical skills are growing very, very quickly and we want to be a part of that and we think we will, in the future, have a lot to learn from them,” he said.

Taking Bill to their hearts

Through  the Fawcett Foundation, Bill has formed a connection with Udayana University in Denpasar, where he has been invited to become a visiting professor of ophthalmology. The university has also signed a memorandum of understanding with the LEI.

“The main aim has been to help teaching with clinics and surgeries and the result is a dramatic improvement in their clinical skills,” he said.

As the exchange program matriculates more eager young doctors and graduates industry ready specialists, the role of the Australian ophthalmologists has shifted from teachers to peers.

“This year, as the clinical skills improve, they have been seeing a large numbers of patients. Quite frankly I’ve learnt a lot myself by seeing how they work and what they are doing, so the balance is shifting. I’m becoming deliberately redundant because these guys are now very good.”