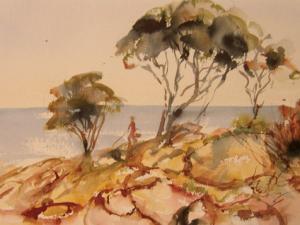 A Man of Colours Dr Paul Drury and one of his “fast and loose” landscapes depicting Bunker Bay, WA.

Dr Paul Drury is an unlikely artist. He certainly was never destined to become a photographer. A career radiologist at Geraldton Regional Hospital and Sir Charles Gardiner Hospital, he’s spent the past 20 years pouring over film and negatives and likes to leave work at work.. Nor is he the kind of character to pull on a beret and velvet jumpsuit in a leud attempt to storm the artworld but he does however rather enjoy painting.

A self confessed amateur, Paul’s the weekend hobbiest you’d expect to find lining the banks of the Swan River, adjusting their easel with wineglass in one hand, enjoying the sun and minding his own business while making refined sweeps of watercolours on paper.

But after a few workshops and TAFE night classes plus 10 years of regular practice, this artist is beginning to show promise, not that the modest Paul would ever admit it, but he does divulge the end result can be pretty satisfying, sometimes “even worth framing”.

Inspired by the “fast and loose” style of British watercolour painter Ron Ramson, it takes Paul between 30 minutes to an hour to spit out a respectable landscape which he occasionally exhibits at his many painting clubs or societies. He then stores his artworks on a bench next to hundreds of other paintings that might someday become a present for family or friends or get “swapped” around on the walls of his office or house.

The self taught brother of a Belfast art teacher, Paul’s painting ideology is far removed from being a perfectionist. Instead he welcomes painting as a steep departure from the exact science of radiology and a therapeutic escapism that has provided a treasured outlet for the past decade. “You can put in whatever you like and leave out whatever you like which is so different from medicine where you have to be so precise all the time. It’s nice to get away from the scientific and get out in the open air as WA’s climate is so conducive to outdoor painting.

A member of the WA and Geraldton Arts Society and Perth’s Riverside Painters, he adopts an “impressionistic” style and paints twice a weekend in a variety of locations, occasionally resulting in impulsive holidays to remote destinations like central Australia where he captures the red pindan soil and skewed trees with the rawness it deserves.

Beginning drawing with brush and ink, he has met a few other painter doctors along the way and believes painting has the potential to become a popular pastime amongst the medical profession.

“Having a group is really worthwhile because it gets you out and motivated for painting and meeting new people. You can learn new techniques and often go on expeditions to great locations you hadn’t thought of yourself. It’s certainly a social activity but it’s also a great way to develop your painting.”