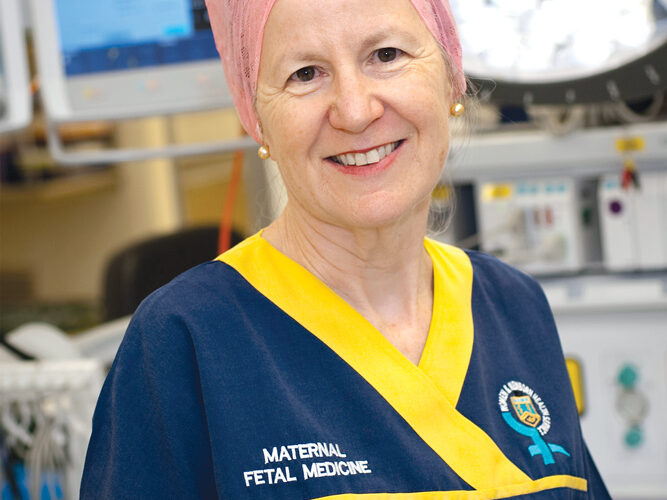 Better lives for mums and babies 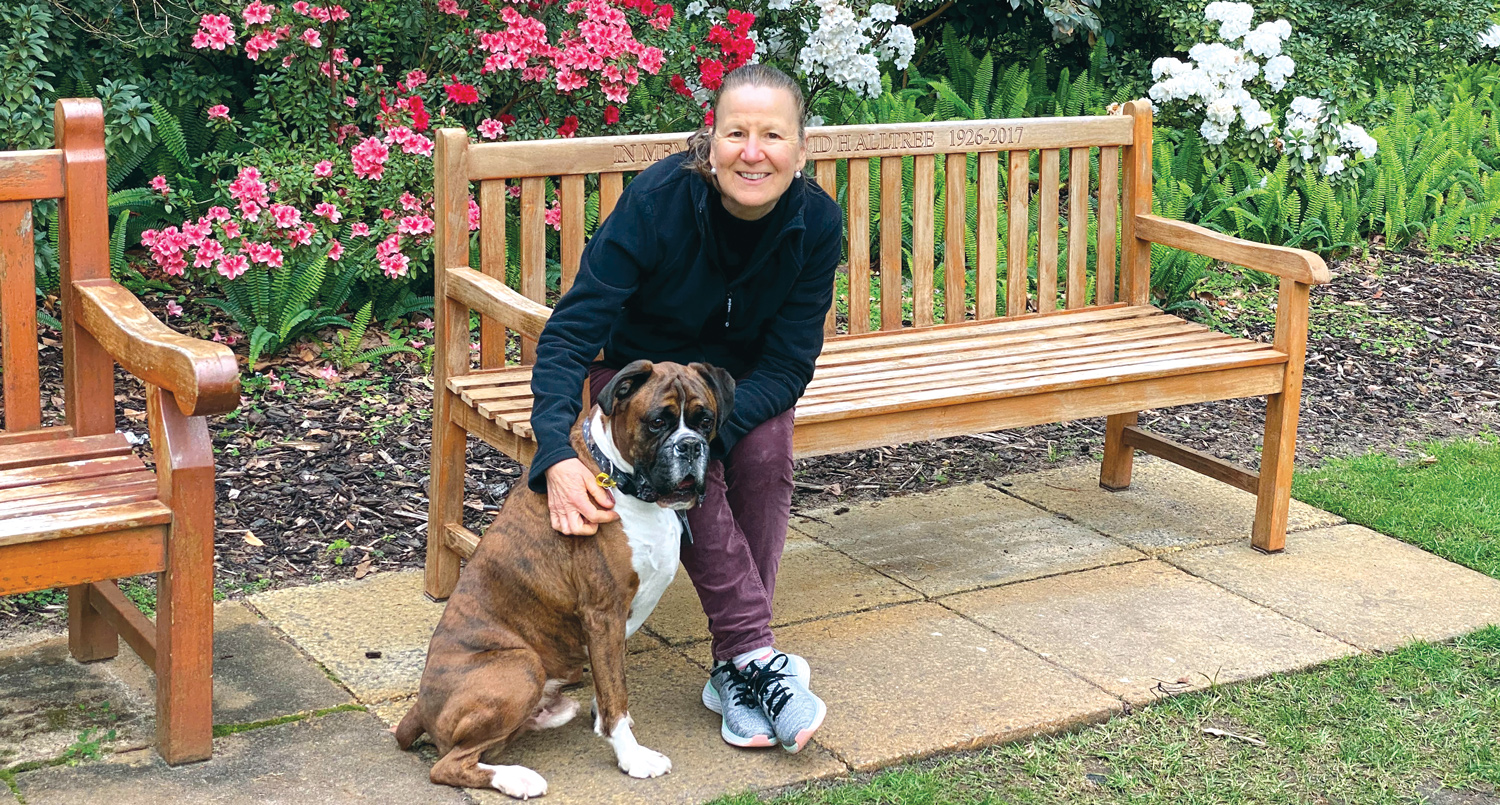 Don’t dare call her a rebel – Professor Jan Dickinson won’t answer to that, but, as Ara Jansen discovers, she’s a trailblazer who has dedicated her career to better the lives of mums and babies.

Professor Jan Dickinson’s office is on the top floor of King Edward Memorial Hospital, facing the road. There are books everywhere, pictures of her much-loved boxer Jasper and a wonderful wooden chair she received after studying in the US. She’s well settled in this space. With a glint in her eye, the maternal fetal medicine specialist explains that she was born not far from her desk. And it’s not so many steps from the area where she also did her medical student training.

She jokes – though not in a fatalistic way – this space is where they’ll find her one day at the other end.

“I’m quite at peace with where I am,” Jan says. “I just tried to make myself a woman of science. I mean, obviously, one assumes that it’s kind of a coincidence that I was born here but that wasn’t necessarily a reason for becoming a doctor. Quite honestly, I’m not one of these people who had it as my life’s passion since I was a child.

“It was something that gradually came upon me when I was a senior high school student. I didn’t feel a great passion to do medicine. I do now. Yes! But I didn’t then.

Too young to call

“When I was in medical school, I think like a lot of medical students, you kind of just do what you do. I really didn’t know what it was about particularly much. But I did well at school and when you did well at school in the 1970s, you gravitated to that because women didn’t do engineering.”

That decision led to a series of other choices which were not common for women at the time.

“When I started doing obstetrics and gynaecology as a medical student, I believe that’s when I really became interested in women’s health. Until then, I hadn’t much of an idea about what I was going to do. I think that’s what happens when you take a 17-year-old from high school and plonk them in medical school.

“So, I became quite interested in women’s health. It wasn’t particularly popular at the time – not very many people wanted to do obstetrics and gynaecology.”

There were women trainees but like much of medicine, it was dominated by men. Today, Jan says 85% of the of the trainees in obstetrics and gynaecology are women.

“I think it’s fantastic and appropriate that this area should be female dominated. That’s been hugely positive for the specialty as some of the older, more patriarchal approaches to women’s health that my mother experienced have disappeared with the increasing numbers of female trainees and males who are more positive towards the specific needs of providing women’s health.

“In Western Australia, we’re fortunate to have some outstanding young obstetricians and gynaecologists who are doing so well because they listen to the women. I think there’s been a huge change in obstetrics and gynaecology and it has become a lot more caring, more female-oriented, which is how it should be as women are our focus, and more tolerant to women’s issues and medical needs. “I had done a lot of deliveries, but I learned more at the delivery of my son because then I suddenly had insight into things like just how uncomfortable you are and what people would call the minor maladies of pregnancy, were actually a big deal.”

Jan is professor of obstetrics and gynaecology (maternal fetal medicine) in the School of Women’s and Infants’ Health at UWA and recently joined Aurora Imaging, an ultrasound practice specialising in women’s ultrasound and prenatal diagnosis. Then there’s the teaching and mentoring of medical students, student midwives and trainee ultrasonographers as well as obstetricians, gynaecologists and upskilling GPs.

Between 2011 and 2016, she was the first female editor-in-chief of the Australian and New Zealand Journal of Obstetrics and Gynaecology. Jan has also initiated and been involved in programs and projects across maternal fetal medicine, including being an obstetrician with the WA Preterm Birth Prevention Initiative and a long-term follow-up of children with congenital malformations.

She was recognised in this year’s Australia Day Honours List as a Member (AM) in the General Division of the Order of Australia. Thrilled to be honoured, Jan didn’t realise how much it meant to her until she was presented with her medal.

While she might have gone places other people haven’t – including training in maternal fetal medicine in Texas and Florida in the late ’80s and early ’90s – Jan Dickinson is much happier answering to trailblazer or pioneer than ever being called a rebel.

As a resident and registrar, she became interested in high-risk obstetrics but, during that period, maternal fetal medicine wasn’t yet a subspecialty. She believes she rode the wave started by the likes of Professors Brian Trudinger, Warrick Giles and John Newnham, but her work still made her only Australia’s sixth maternal fetal medicine specialist.

It’s a field which can cover everything from helping women with heart problems or organ transplants fall pregnant and have a healthy obstetric journey, through to looking out for a fetus which isn’t growing sufficiently. Some of those can be treated in utero, which became possible with the use of ultrasound, which Jan describes as a vital third hand, and the use of lasers in helping tiny bodies in the womb.

“Now we can diagnose many disorders in the fetus, we can make a difference for the woman and her baby and we can treat some fetal conditions in-utero.”

This kind of work led to Jan setting up the fetal surgical service in WA. It is especially relevant because of WA’s isolation and an inability to send women elsewhere for highly specialised medical care. She says for the size of our population we bat well above our weight in this area.

One recent example was the use of placental laser ablation to treat Twin-Twin Transfusion Syndrome, where monochorionic twins sharing a placenta have blood flow imbalances such that one twin gets more amniotic fluid volume than the other.

This means one baby doesn’t get enough nutrients while the other struggles with the overload. Using a tiny fetoscope and laser, the shared blood vessels on the placental surface are coagulated to help equilibrate the flow between the two babies, which hopefully leads to them developing more equally before birth.

Alongside this busy multi-pronged professional life, Jan has been married to John, a mechanical engineer, for 40 years. Their Texan-born son Tim is an emergency medicine doctor.

Photos of boxer dogs are all over Jan’s office. One of them is her energetic dog Jasper, whom she loves to walk when she’s not working.

Jan and John like to travel (a trip to Scotland is next on the list) and have a small but well-appreciated art collection, including a series of bird paintings, favourites of Jan’s. She’s also a reader, with eclectic tastes.

Two years ago, Jan stopped delivering babies and now concentrates on ultrasound consultations, running the hospital’s Thursday antenatal clinic and shares her clinical experience with junior medical staff and midwives. But like the monochorionic twins, she can still be called in for surgery.

Joy of the work

Maternal fetal medicine remains fascinating to her because while it seems specific, it also runs a wide gamut, including women who have multiple sclerosis, heart issues or a chronic neurological disease and want to become pregnant.

“I see a lot of women before they get pregnant, which is really helpful. We can attempt to facilitate medical and obstetric care for women who may have a physical disability or significant medical issues using a multidisciplinary team approach,” she says.

“We talk with them about what they may or may not need to optimise their pregnancy outcome. It’s important stuff that makes a difference. If the mother receives specific treatment based on her medical needs it provides her with the best opportunity for a successful pregnancy outcome.”

Another area Jan has worked tirelessly in and is very proud of, is the HIV in pregnancy service. It’s a multidisciplinary statewide service across several hospitals and involving a variety of specialists such as immunologists, infectious disease physicians, paediatricians, nurses and midwives to provide care for women living with HIV.

“We have an outstanding service looking after all women living with HIV in our state. This comprehensive service has resulted in an extremely low mother-child transmission. Whilst it is a small number of pregnancies each year, the lifelong health consequences for the woman and her baby are so important. Disease prevention is one of the best outcomes in medicine.”

From geneticists to haematologists, one of the things Jan loves about maternal fetal medicine is it’s so multidisciplinary as it interacts with so many other specialties. There are very few specialties where that happens, so it’s something Jan relishes.

Add to that, Jan has seen women through multiple pregnancies and then seen their daughters have their own children.

“It has always been such a privilege. Honestly, I think I have fortunately gone into one of the most amazing professions. When I started, I didn’t know how wonderfully it was going to evolve with technology.

“Human beings are incredibly brave and the human body is an amazing piece of bioengineering. I think a lot of people don’t appreciate just how wonderful each and every human is – or can be.”