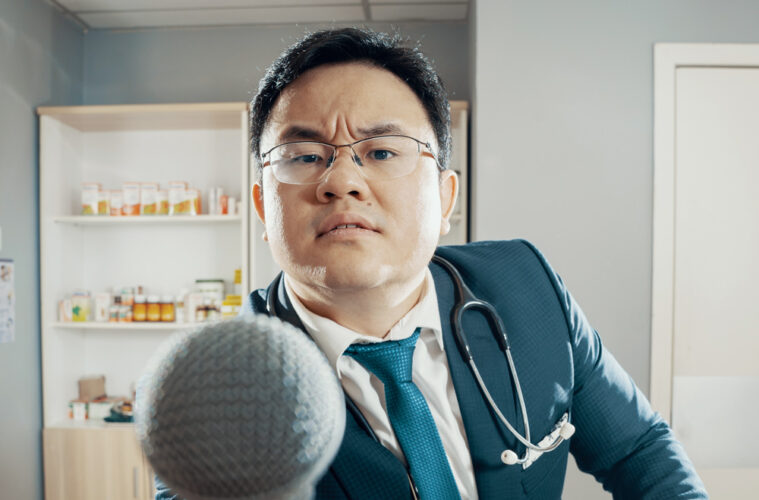 Doctor of laughs will see you now

He gave up medicine for comedy but Dr Jason Leong tells Ara Jansen he’s still healing people with messages wrapped up in jokes.

Dr Jason Leong often tells his audiences he’s a real doctor, not a PhD holder – because he can actually contribute to society, there’s a small difference and varying levels of utility. Clearly Jason Leong tells that joke better – because that’s what he does now.

After university Jason says he did what every good Asian son is supposed to do. He had a responsible job being a doctor. He actually quite enjoyed the work but hated the politics of the Malaysian health system and found the bureaucracy soul crushing. The senior doctors around him seemed miserable and he couldn’t imagine the next 10 to 20 years like that.

Risking the disapproval of parents, friends and colleagues, Dr Jason took a calculated risk and decided to pursue a passion – stand-up comedy. It proved an astute choice and has put him on stages all over Asia, across Australia and for shows in New York.

Dubbed Malaysia’s funniest doctor, Jason’s medical knowledge allows him to make jokes about doctors, the system and patients with a degree of insight. While it’s not the only thing he jokes about, he does like to use humour to veil real world messages which might be hard to stomach otherwise.

The class clown with a quick wit, Jason started honing his chops at school and then medical school taking every opportunity to join the debating team, host events, MC, speak in public and talk to new students. He says he always tried to inject some sort of comedy and fun into his presentations. That kindled a love for stand-up and it became his passion. He also found plenty of language confusion to fuel his stand-up stories when doing medical training in Dublin.

Jason’s wife Komella is an anaesthetist in a Kuala Lumpur hospital and supported her husband’s move knowing what he was experiencing.

“She was hugely encouraging and as a doctor she knew the perils of continuing in the profession,” he says. “The health care system needs a lot of reform and the burden falls on the most important asset, which is the doctors and the nurses.”

In his Netflix comedy special Hashtag Blessed, Jason gives his diagnosis on the nonsense of traditional healers, his disdain for business class flyers who show off (please take a bungee jump – wirelessly) and why you should always carry a stethoscope in your glovebox.

As a man of science, logic and rationale and a fan of tech, he takes every opportunity to advocate for science literacy. As a trained science professional, he wants people talking about things that matter.

“Being a doctor in comedy has definitely been an advantage because there’s not many with that background. There’s definitely a different point of view and I use that to my advantage.”

He also suggests his move to comedy is a great example of a larger career migration being made by other Asians of his generation.

“No one from my parents’ era would consider a career in the arts. They were so deeply entrenched in the sciences. For that generation – migrants often with limited resources – they wanted jobs which ensured security like lawyers, doctors and engineers. Steady jobs.

Now we’re YouTubers and comic artists who make a living. We’re going against traditional jobs and it’s nice to see that. No one would have thought that 15 years ago.”

As for Jason’s parents, he didn’t initially tell them he’d quit medicine for stand-up. They know now. He’s famous enough. Apparently, they’re just relieved he can fend for himself.

Dr Jason Leong performs at the Perth Comedy Festival which runs from April 29 – May 15. He’s at the Astor Theatre on May 6 and 7.

Check out www.perthcomedyfestival.com for details and ticketing.

We have a double pass to see Dr Jason Leong’s show on Friday May 6 at 9.30pm at the Astor Theatre. Enter Competitions here.