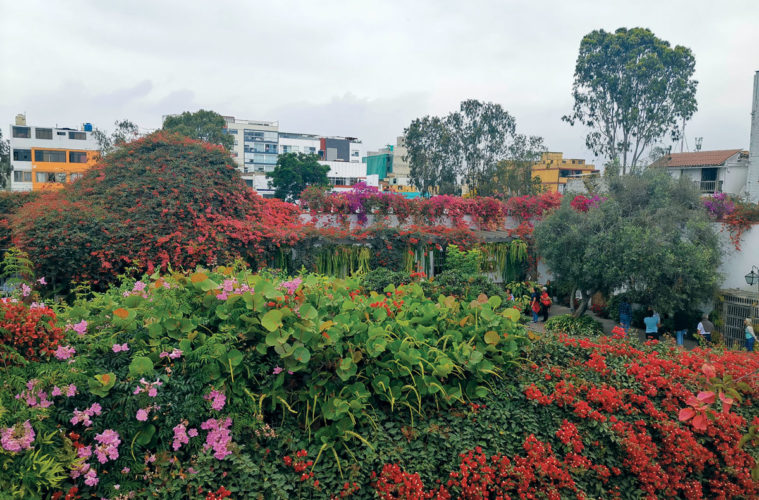 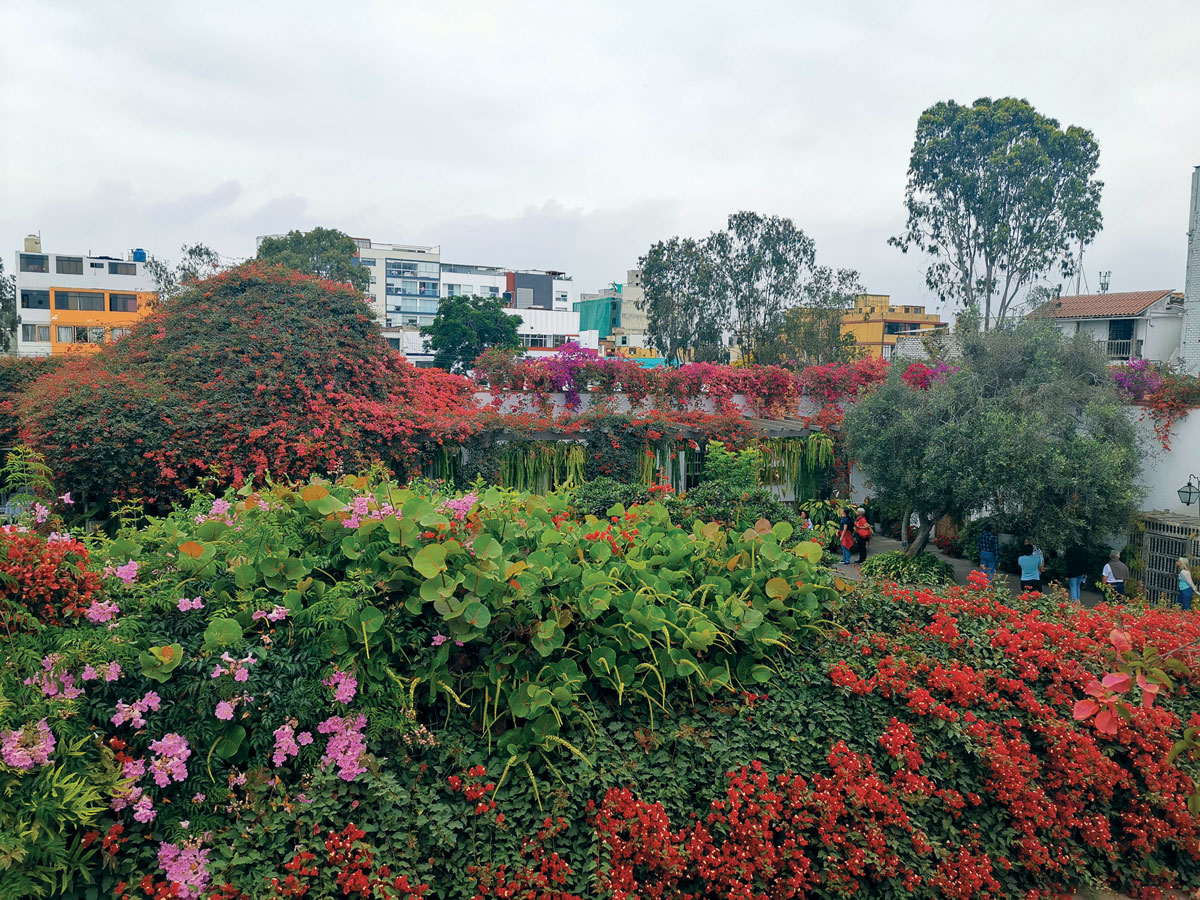 The gardens of Museo Larco

As a young cadet on a morning newspaper in the 1970s, one of my daily duties was to sort out the international cable stories that had piled up for the foreign editor overnight. There was a pile for Asia (big), a pile for the US (bigger), a pile for the UK and Europe (bigger again) and a humungous pile for bus crashes in the Colombian capital, Bogota.

Throw in regular political coups, violent drug lords and planes falling out of the sky (as well as the aforementioned buses that still find the poor, mountainous roads difficult to navigate), and South America fell off a young single woman’s travel radar. Much better to visit as a greying 60 something with a dodgy hip – the universal definition of an untouchable. 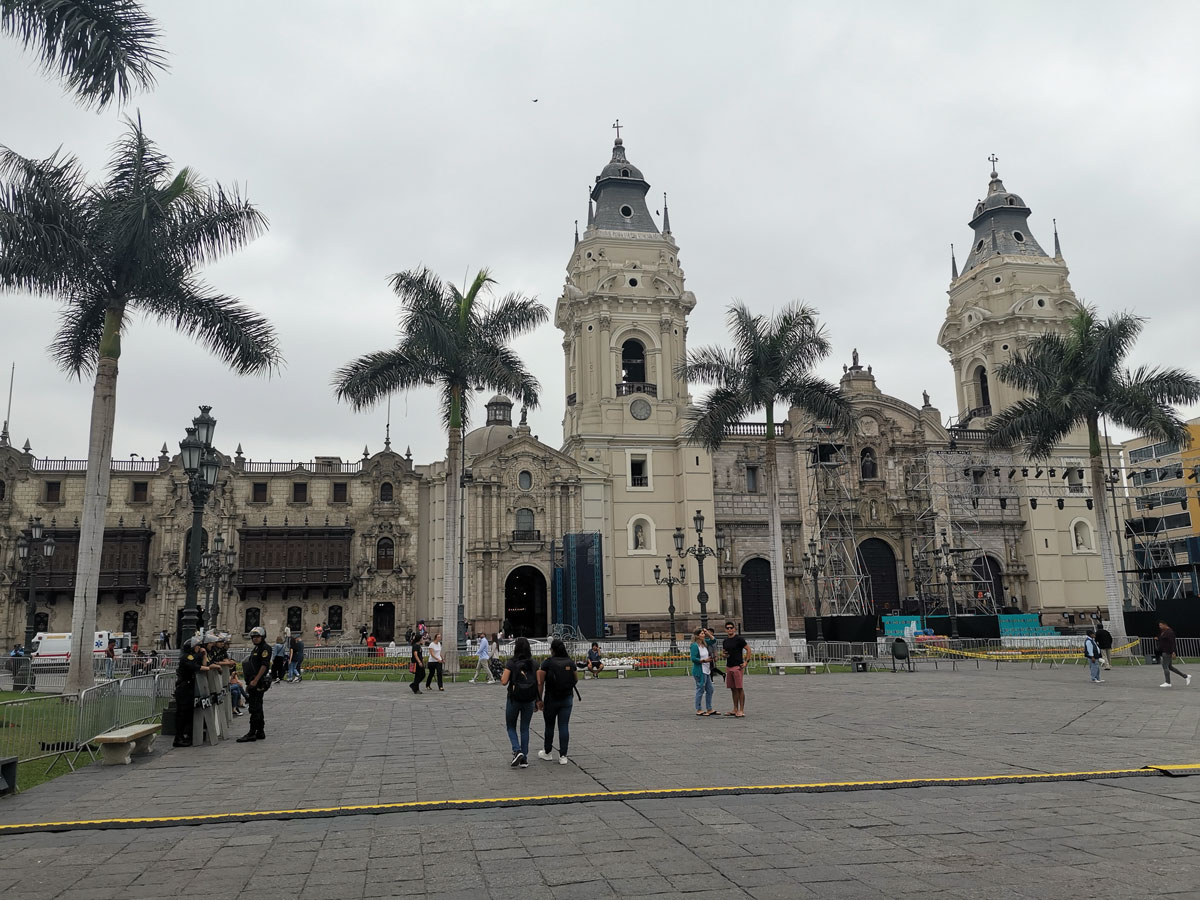 The Plaza Mayor hums with politics and religion. The Government Palace, also known as the House of Pizarro, is complete with a Buck Palace like balcony. The main cathedral watches over the president and the city’s Lord Mayor.

With a fluent Spanish-speaking daughter living in Lima, there was really no debate where I would head on my maiden South American adventure – Vamos, Peru!

So, with an arm full of vaccines, most essentially a Yellow Fever certificate, and a hip full of SynVisc, the first leg of the 31-hour odyssey began. For West Coasters, you have to get yourself to either Sydney or Melbourne and, as Lima is not on a direct flight path from any Australian port, all flights go through the Chilean capital of Santiago.

After more than a day on the ‘road’, arriving in Lima is a wonderful thing to achieve but be prepared (and patient) for another 50-60 minutes while your driver valiantly negotiates the insane Lima traffic. This will be the case for most of your time in this bustling city of 10 million people – and its slightly fewer cars, buses and trucks. 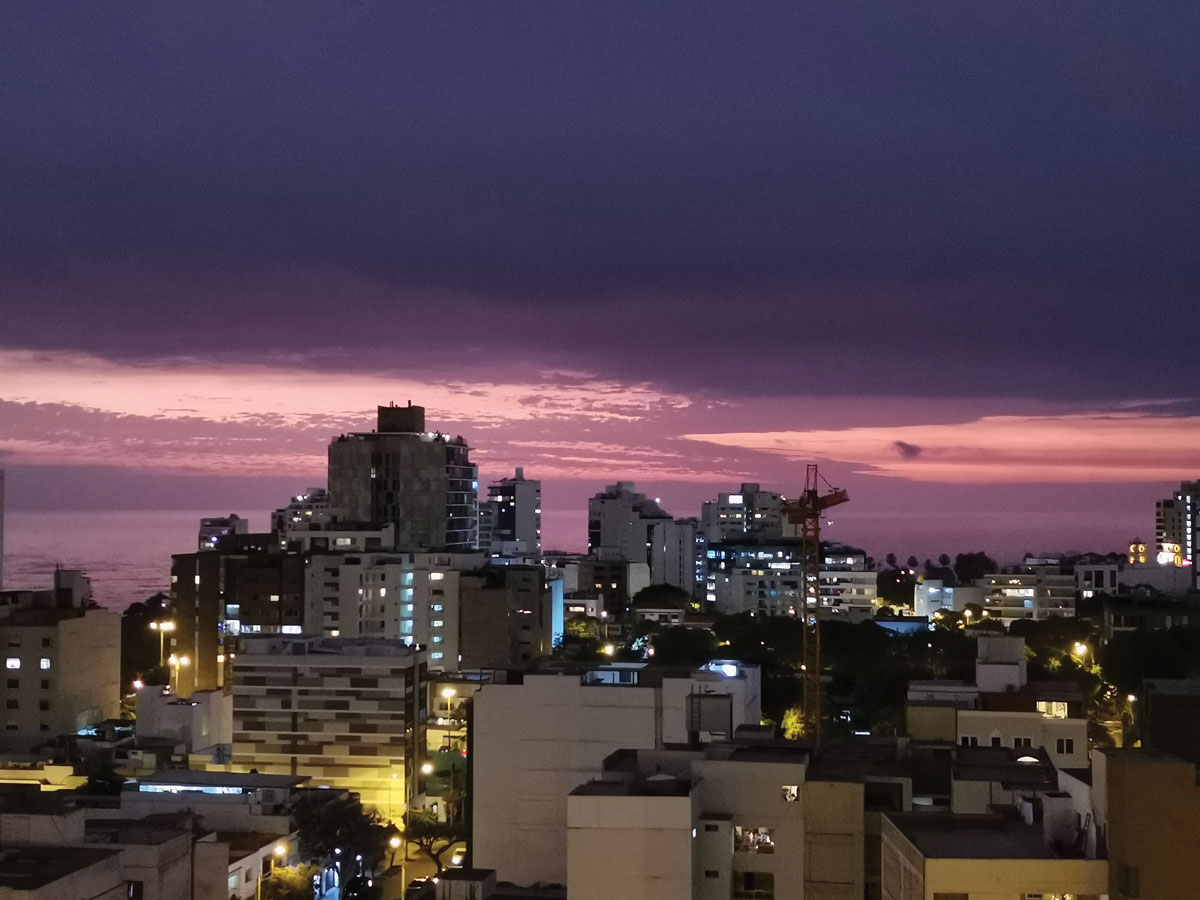 The Miraflores night skyline with the Pacific Ocean lapping in the background.

Peru is divided into three geographical regions that all contribute to the greater good and a GDP that pushes it into one of the healthier South American economic zones. Colloquially, they are ‘The Coast’, with Lima at its heart, ‘The Jungle’, with the Amazon Basin thumping out the beats, and ‘The Mountains’, where the air is thin and the history is thick. 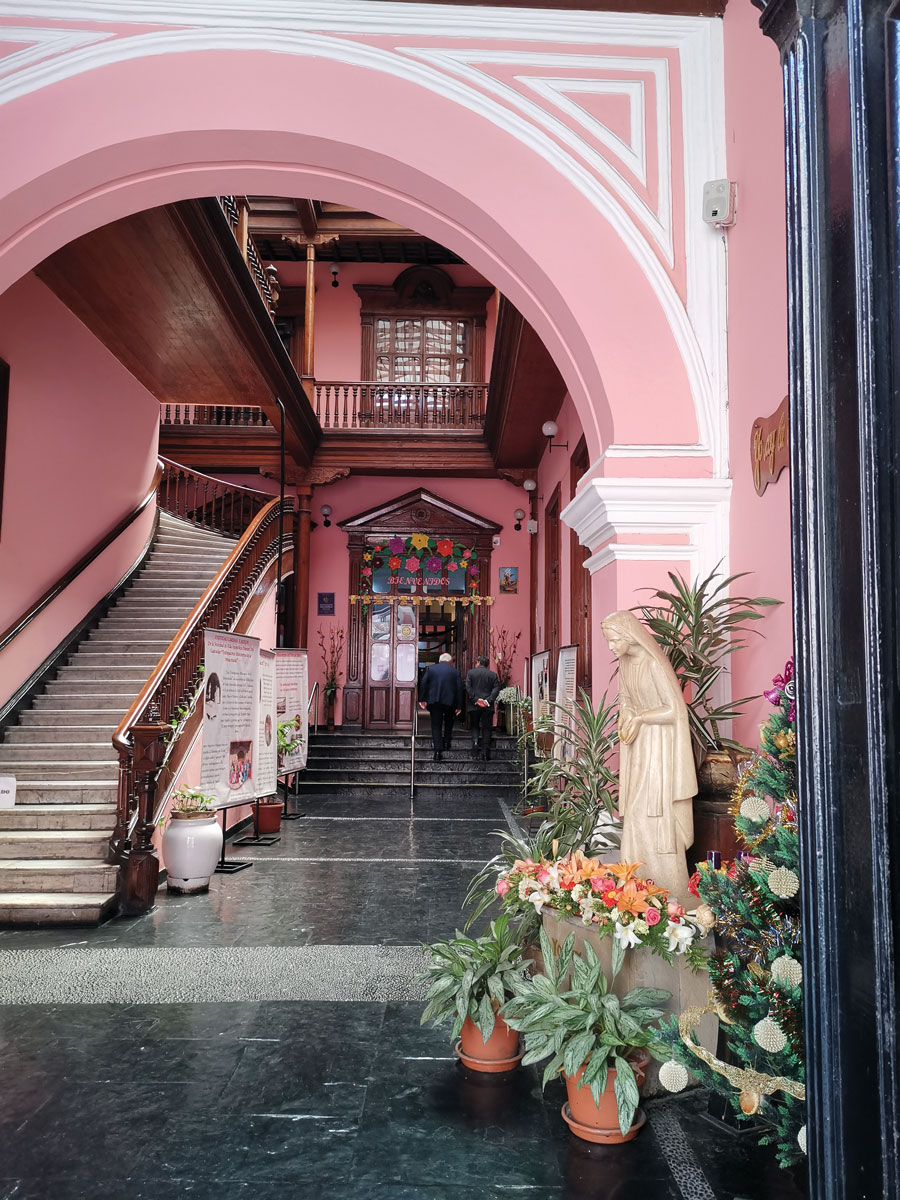 Entrance to the L’eau Vive

The first part of the five-week adventure takes place at The Coast, broadly, and Lima, specifically. There has been continual habitation of Lima for thousands of years, but that still doesn’t prepare you for a 1500-year-old pyramid to appear miraculously at the end of a suburban street in Miraflores.

The Huaca Pucllana is a pre-Incan step pyramid originally built by the resident Lima culture between 200AD and 700AD. It is a spit from the Pacific Ocean and commands views over the city, hence its political significance. It is part of a chain of pyramids and archaeological sites around the city – just a 10-minute car ride and you’ll be at the feet of another pyramid, the Huaca Huallamarca, in the upmarket suburb of San Isidro.

Lima is like many modern cities that must co-exist with their pre-history – sometimes its valued and revered, sometimes it’s a bit of a nuisance. Like Athens, there is history with every shovel load in Lima.

The best place to see what the shovels unearth are the museums. The Larco Museum has great raps on Trip Advisor and, interestingly, it is a private museum, something we don’t experience all that much in Australia. 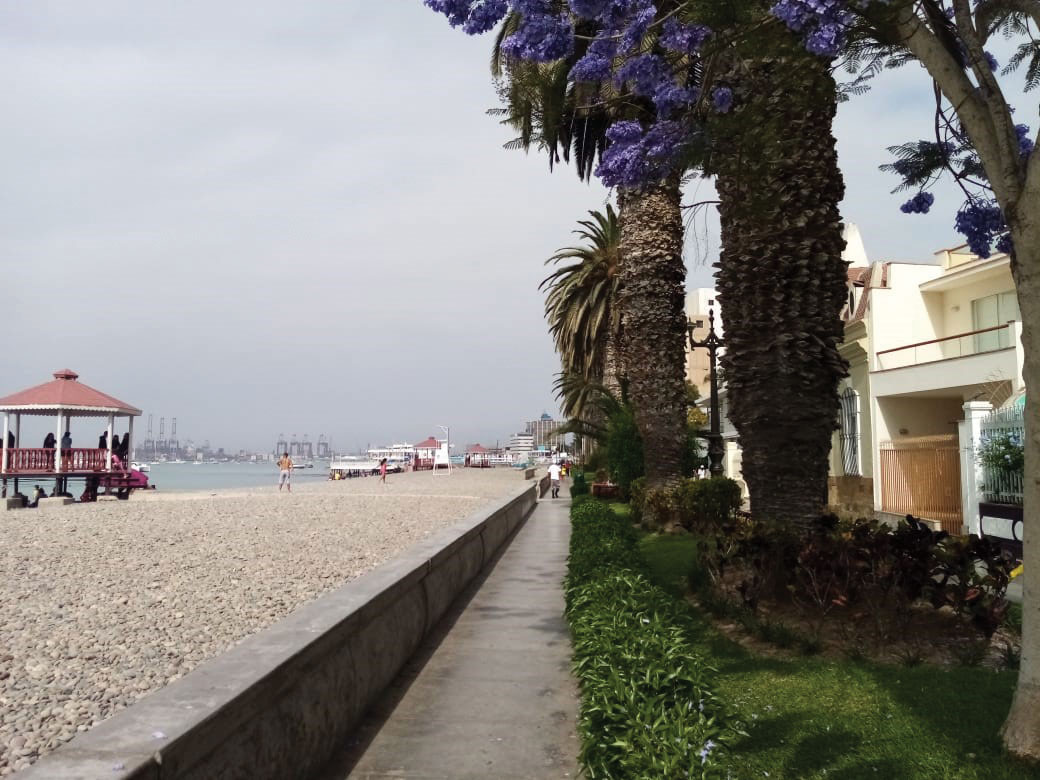 The main Lima port is at Callao, a somewhat perilous district, but on the sea’s edge is one of the prettiest little enclaves known as La Punto.

It is located in the wonderfully named Pueblo Libre, or Free Town, district of the city in an 18th century vice-royal building. Inside is 5000 years of Peruvian pre-Columbian history as told by thousands of pieces of pottery, metalwork, textiles and murals. The collection got serious in 1925 when Rafael Larco Herrera acquired his archaeologist brother-in-law Alfredo Hoyle’s 600 odd ceramic discoveries.

To cap off a wonderful visit, the gardens are a thing to behold. In a city that sees little rainfall, these verdant, blooming grounds are a balm from the dusty city streets. The restaurant is crackerjack as well.

For the bohemian (in us all), the Barranco district is full of artists, writers (Mario Vargas Llosa for one), photographers (Mario Testino, another), musicians and actors. Its stop-and-gawk colourful architecture, its parks full of interesting artworks and even more interesting characters, its quaint bridges make it a place to return to again and again, for a great coffee, a stroll to the sea, a drink at the chic bars. It’s a lot of fun.

It’s probably pertinent here to discuss the Australian government’s warning: “Exercise a high degree of caution in Peru overall due to the high risk of violent crime.”

I was in a privileged position of having family who knew who’s who in the zoo and location of the no-fly zones. However, common sense is the best companion a traveller can wish for.

Lima has inhabitants who struggle economically. With the Venezuelan diaspora, Peru has had nearly 1,000,000 people cross its border to find work that is already difficult to find. The capital has more than its fair share of desperate people, so, yes, caution is urged. The rules that were impressed upon me, if ever I found myself alone in unfamiliar territory, were:

I never once felt unsafe and relished the lunchtime swarm in the Government district, known colloquially as Downtown.

Here, street food vendors do battle with trinket sellers, who do battle with city workers, who in turn do battle with their political masters, in a race for the best seat in the hundreds of cheap and cheerful restaurants in the CBD. Everyone is equal at lunchtime. Limans love their food and lunch is the biggest meal of the day. No one wants to waste a minute.

The L’eau Vive (Living Water) or its Spanish moniker, Las Madrecitas de Agua Viva, is a magical restaurant run by Carmelite nuns inside their charter house. During the lunch and dinner hours, the doors open to anyone who can afford its 20 soles ($AU8) three-course meals.  When the doors close, they reopen to feed those who can’t. The food was tasty and wholesome and the welcome even warmer.

I’m not a shopper, however, that said, with time up your sleeve, you can discover why the city is home to some of the best gold workers, tailors and shoemakers in the region. Good quality fabric, cotton, in particular, and skilled tailors make a bespoke suit or shirt in just a few days. Rings can be fashioned in a matter of two to three days.

The shops may look grungy and a little dodgy but the outcomes are wonderful and the prices compelling.

Did I mention the churches? Just as I am a sucker for museums, I do love a good church, as most self-respecting agnostics do. There are plenty to choose from, particularly in Downtown. Lima at Christmastide is when they are at their most smiley.

Lovers of religious art may not find anything particularly sensational but I did rather enjoy the depiction of the Last Supper with a roasted guinea pig on the menu. That gem could be found in the dining hall in the monastery of the Church of San Francisco of Lima on a tour of the church’s catacombs. There were a scattering of skulls and hundreds of femurs with hip balls attached – many looked in better condition than mine.

A city of many millions of Catholics at Christmas time is ripe for fiesta. On Christmas Eve, non-retail businesses close about 2pm and families head home to prepare the meal that will be devoured at midnight. Turkey is the hero and is often taken to the local bakery to be roasted because Limans either don’t have ovens or rarely use them.

In the evening, families of all ages and sizes troop to mass, which can be as short as 45 minutes or can stretch on for quite some considerable time. But a bit like a football match, people seem to come and go at will. We left after a polite 90 minutes, just in time to see a few Baby Jesus dolls being blessed by the priest in time to return to the home manger for the stroke of midnight.

That auspicious hour is marked by some of the best unofficial firework displays bursting out across the skyline. From balcony and apartment block vantage points, people run books on which district puts on the best display. After the last cracker fizzes into the night sky, the ambulance sirens start wailing. It was all very reminiscent of Guy Fawkes night decades ago…and why backyard bonfires were eventually banned.

And a final note is on health care.

Household potable water is bought in bulk, and for tourists, it’s in bottles available from supermarkets and bodegas across the city. Tap water is not to be drunk without boiling.

There are also plenty of opportunities for food spoiling in this humid city. With seafood being the number one delicacy, it is also the number one super highway to the toilet bowl. Let common sense be your guide when choosing venue and dishes, then sit back and enjoy. The cuisine of Lima is delicious!

The public health system is mightily overworked, the private system expensive, and as a result, pharmaceuticals of many hues are readily available over the counter, usually from the stern-looking pharmacist in the local shopping centre. Smiling is not advised, but medical knowledge is a significant advantage.

Vamos, Lima. I miss you.