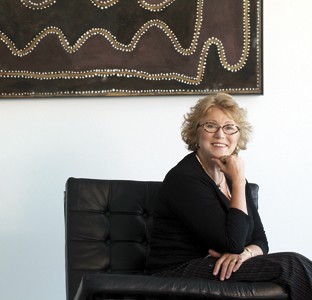 Home Is Where the Art Is: Janet Holmes a Court

It may surprise you to know that one of WA’s best-known business women was once described as a left-wing activist! Does Janet Holmes à Court AC – arts lover and philanthropist – still maintain the rage?

“Yes, most definitely! I believe Australia’s treatment of refugees and asylum seekers is disgraceful. It’s inhumane in every sense and seriously damages our international reputation. I’m also very upset by the decline in funding for education and the arts, and even more so by the statistics relating to Indigenous incarceration and suicide.”

“And the increasing divide between rich and poor is a real concern.”

Mrs Holmes à Court is a quintessential Sandgroper, born in Perth and educated at Perth Modern and UWA but a few aspects of life in the world’s most isolated capital city continue to rankle. “We don’t do ‘spectacular’ very well here. It’s absolutely fundamental to think about the aesthetics of public space. For example, the Bell Tower is rather diminutive and I’m a little surprised that, given all the fuss and disruption, Elizabeth Quay actually looks out on a relatively small body of water.”

“There’s a recurring tendency for knee-jerk planning that sometimes translates into serious, albeit unintended, consequences.”

“The new Football Stadium may well end up encouraging gambling because there’s not much to do after the final siren except head for the Burswood Casino. In the same vein, the construction of the Graham Farmer Tunnel was an excellent addition to public infrastructure but did anyone think about the congestion it would cause on Thomas Street?”

However, it’s not all doom and gloom for a high-profile woman whose own family name [Ranford] goes all the way back to the early foundation years of the 1840s.

“I’m truly local by birth, though I do actually see myself as an Australian. I have a great love for this country. It feels like my place when I look up at that big, brilliant sky and the amazing colours of the land and ocean. The Pilbara, Kimberley, Wheatbelt and the South West are such wonderful places.”

“And of course there are the people! I’ve got friends that go back 70 years and one of my sons lives here with his wife and five children.”

Another luxury that all West Australians have the opportunity to share is an increasingly sophisticated artistic and cultural life. The ongoing generosity of wealthy individuals such as Janet Holmes à Court plays an important part. She has long been a collector of Australian art and she fosters local talent at the Holmes a Court gallery at Vasse Felix winery in Margaret River.  She is also chair of the WASO.

“Most of my philanthropy involves the Arts. I’m involved with the West Australian Symphony Orchestra, Black Swan State Theatre Company and the Australian Children’s Television Foundation, among others. It goes without saying that the Arts need philanthropic and corporate support.”

“I reckon it’s possible to hear fine music 365 days a year in Perth. And our Concert Hall has one of the best acoustics in Australia.”

The woman who went on to head-up one of Australia’s signature companies began her own career as a science teacher.

“I learnt to work hard and put a lot of time into preparation. It usually pays off if you do the simple things well. I’m also a great believer that nothing can be achieved on your own and being awarded the UK Business Woman of the Year in 1995 was a classic example of that.”

“It was for my work with London’s West End theatres and, naturally enough, a large team of people contributed to the end result.”

It’s a well-known fact that the ‘baby boomers’ are ageing fast and the health sector, particularly aged care, is struggling to cope.

“I’m a supporter of voluntary euthanasia, with the emphasis on voluntary! In fact, I’ve been a member of WAVE [WA Voluntary Euthanasia] for many years.”

“More broadly, I’m a little concerned at the high fees charged by some specialists and I’d like to see a lot more attention given to health education, focusing on illness prevention.”

“I’m so lucky to be in such good health. Our family has had the same GP, Dr Rex Hughes, for four generations. That’s such a luxury!”