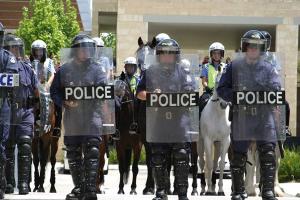 WA Police Commissioner Karl O’Callaghan has seen it all in his 32 years of service. Like all policemen, he has done his share of beat walking and operational policing. He has overseen front line operations as District Superintendent in the Wheatbelt and South East Metro districts. He has even been in the hot seat as WA’s ‘top cop’ for a few years now (since 2004), all of which make his observations on WA both sobering and chilling.

“Police are facing more violent challenges than they have ever faced before. I have never known as much violent behaviour as we see now, much of it driven by amphetamine usage and alcohol binge drinking domestic violence situations,” he said.

Commissioner O’Callaghan said one of the main concerns for WA police is mental health care, particularly with the recent spate of shootings in WA and elsewhere that have involved deranged men carrying weapons.
“One of our biggest issues in the next few years is how we – the medical profession and police – deal with people who have mental health problems. Police are often the first respondents and doctors are then the second respondents.

He points the finger at drugs as being one of the main culprits in the upsurge in psychotic violence. “Some of it is drug-induced psychosis, no doubt about that. Substance abuse is a big issue for us. We are also recognising mental health as a driver in criminality and other anti-social behaviour much more than ever before.”

While psychology degrees for future generations of police are out of the question, he believes WA police need to better understand mental health issues. Part of this understanding is establishing a better working relationship with medicos.

For example, the interaction between police officers and hospital medical staff when transferring mentally ill patients into hospital care

“A lot of police officers are frustrated by the amount of support they get when moving patients from their care to hospital and other medical care but we understand it is a long-standing issue. Not getting quick medical support so police can be released back to do their job is also frustrating for us. We continue to work with the WA Health Department to try to streamline this process.

Despite this hiccup in doctor/police relations, Karl is quick to point out the positives

“Communication with doctors varies depending on where police officers are serving and trying to interact. We have a fairly constructive relationship with the Health Department, particularly on strategic matters like mental health, drug abuse, and those sorts of things. We have a very good relationship with the casualty and emergency centres of most hospitals.

“When I have called in doctors at night to assist with certain things, particularly in regional WA, the response was generally good. When I look back on my career of my interaction with the medical profession, I think it has been fairly supportive.

“I have never known as much violent behaviour as we see now, much of it driven by amphetamine usage and alcohol binge drinking”

The dynamics between the two professions are interesting, and as O’Callaghan points out, medicos and police have more in common than meets the eye.

“Both police and doctors are in the business of diagnosis. There are many similarities from that perspective because police have to go in and diagnose an incident or the degree to which a person has an issue. They will then try to resolve it, like a doctor does.”

Another of the challenges facing WA police is the need to ensure their physical and mental well-being and prevent burn-out. Today’s spike in violent crime is taking a toll on officers and Karl is keen to remedy this.

“As we move towards the future, one of the big challenges is to provide some sort of support for police exposed to trauma events or suffering from post-traumatic stress. In the past, we accepted this as part of the job, and still accept it as part of the job, but we need to ensure we provide adequate psychological support and other counselling services for them.”

One approach is to keep officers physically fit. The WA Police service operates a “Fit for Life” exercise program and encourages staff to do their 30 minutes a day. “Physical fitness helps police officers with their mental fitness as well,” O’Callaghan said.

In addition to the focus on physical and emotional health, Karl believes back to basics policing, reduction of volume crimes (like burglaries), and community engagement are the current strengths of the WA police force. Looking ahead, he sees mental health issues, assault and family violence, and road trauma as the main problem areas to be overcome.