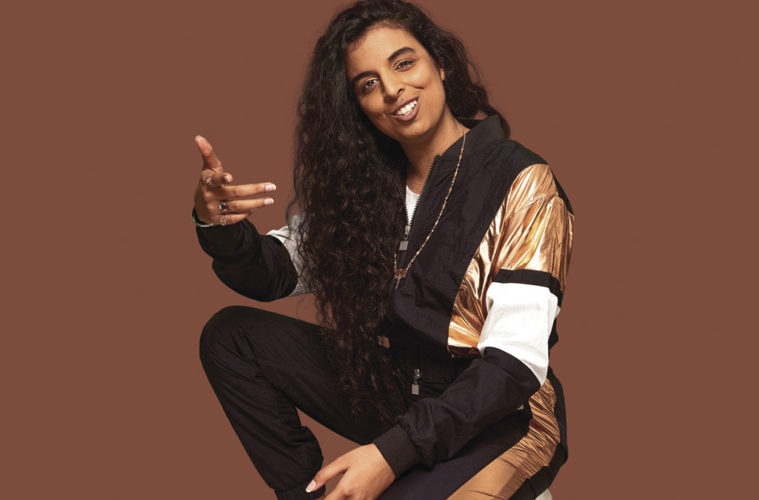 Sukhjit Kaur Khalsa slammed her way into the national arts scene through performance poetry, representing WA at the Australian Poetry Slam in 2014 and a standout appearance on TV’s Australia’s Got Talent, in 2016, where her work brought racism starkly into the nation’s living rooms.

Her energy is infectious and her talent inspiring.

So, what’s next for poetry’s poster girl? The theatre, of course.

Sukhjit hits the boards of the Heath Ledger Theatre in October in a one-woman poetry show that takes audiences on her own journey of growing up Sikh in the Perth suburb of Leeming.

Fully Sikh is, as Black Swan State Theatre Company says, “is a celebration of family and Sikh culture…It is the story of growing up as a brown, hairy Sikh girl in the Perth suburbs and features a Punjabi meal cooked live on stage.”

How does a poetry artist with a suitcase full of three-minute poems go about stringing together a theatrical narrative to keep an audience transfixed for 75 minutes?

With a lot of talent and some help from equally talented collaborators, namely director Matt Edgerton and musician Pavan Kumar Hari, who will be playing a range of Indian instruments in the course of the show. Over the past two years, Sukhjit and Matt have been working on the concept. While Shakespeare and his cohort made verse the lingua franca of the theatre in the 15th and 16th centuries, it’s not the usual medium for the contemporary stage but Sukhjit gives those bars a good rattle.

Medical Forum spoke to Matt on the eve of the premiere of this unique coming-of-age story.

Fully Sikh is a co-production between BSSTC and Barking Gecko companies, so its content has wide appeal – for the Sikh community, the regular theatre crowd and young people.

“It’s going to be a pretty exciting window into a culture many people don’t know much about in such an extraordinary form,” he said. “Sukhjit explores her years from late primary school through the high school years where she grapples with her identity as a member of a Sikh family and a high school community, with all the social pressures of tradition, faith and how to fit in with. For young people from strong faith communities, there’s some big challenges in growing up in Australia.”

“It’s pretty massive threshold to pass through growing up, working out who you are, working out what group of people you fit in, and what identity you want to choose.”

“Sukhjit is extraordinary in front of an audience but this is her first full length work of theatre. My experience is developing new work – it’s something I’ve been doing for 20 years across various companies. My role is to work with an artist to help them articulate the story they want to tell and help them find a form and a structure in which to do that.”

“I’m a sounding board. We’ve had four creative developments now where we’ve had our designer, Isla Shaw, a wonderful Melbourne based designer, offer her input on set and costume design. Then musician/composer Parvan Hari, who works musical motifs to underscore the poetry, or in some instances his music is the only thing that we’re hearing. So, it’s been working out how all of these different languages of theatre fit together.”

Sukjhit is a seasoned performer, not just as a performance poet but she has done her time as intern at the Barking Gecko theatre company. She is instinctive about performance and Matt says there is a knowledgeable theatre head on her shoulders.

“She’s very articulate about theatre, she just hasn’t made her own professional play before. She’s by no means a novice and as a performer she is a knockout. Some people just have that ability to step in front of the crowd and work it so they are in the palm of their hand. She’s certainly got that great skill.”