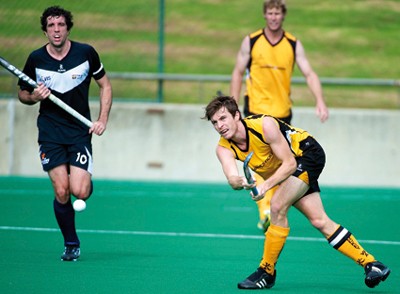 Fergus Kavanagh – No Laughs for Kookas

The spotlight on world hockey will have shifted from the Rio Olympics to the next World Cup by the time this story appears in Medical Forum. But one thing’s for sure, veteran Kookaburra defender Fergus Kavanagh isn’t thinking about hanging up the stick just yet.

“One of the best things about hockey is that it has taken me all around the world. I’ve travelled to some really interesting places and I met my Dutch partner when I was playing in Holland. The time I’ve spent playing in the Indian league has been wonderful and getting paid for it is an added bonus.”

“I pretty much knew when I first starting playing hockey in a serious way that money wasn’t going to be a big part of the equation. I’m happy with the amount I earn but I do look at the cricketers and their salary packages. If I could get 10% of that it’d be amazing! But I do have an Engineering/Commerce degree so there is life after hockey.”

Thrill of the Olympics

When we spoke with Perth-based Fergus his focus was very much on Rio and a gold medal for the the Kookaburras, the top-ranked men’s hockey team in the world.

“I’m one of the more senior members in the side but I still get excited before an international tournament. There’s always a big buzz around the Olympics, it’s the pinnacle of a hockey career and the fact that we’ve never won gold is something that always comes up when I give a talk about playing international hockey.”

As it turned out, the Olympics campaign was a bit of a nightmare for the Kookaburras who entered the Rio Games as world number one. They came crashing out of the competition losing 4-0 to the Netherlands in the quarter finals.

It is the first time since the Seoul Games in 1988 that the Kookaburras have failed to pick up an Olympic medal.

Commentators are already invoking the ‘Curse of the Kookaburras’ as a team who can beat anyone between Olympic years but can only hold up one gold medal from the 2004 Olympics.

The most disappointed people of all, apart from the players, would have been the three psychologists the team hired to work with them after their semi-final defeat against Germany at the London Olympics four years ago.

Before he left for Rio, Fergus put it in perspective.

“One small thing that’s not quite right at a critical moment can be very costly at this level.”

The Kookaburras are always well briefed on medical and security matters before leaving for an overseas tournament, says Fergus.

“My girlfriend and I were a little concerned about the Zika virus because we plan to have children at some stage but we’ve had reassuring advice from our medical staff and the Australian Olympic Committee. Nonetheless, we’ll be taking things carefully.”

“We’ve got measures in place regarding the security situation but a lot of it is just plain common-sense. If we go outside the village we’ll go as a group and make sure we don’t draw any undue attention to ourselves. I’ve been to Rio before so I know what to expect.”

“One other area where we’ve put a lot of thought into is the umpiring at the Olympics. There are always interesting decisions in hockey because it’s such a fast-paced game. The umpires will be from all over the world so interpretations will vary but we’ve put a lot of work into making sure we’re not disadvantaged by that.”

The hockey stick is designed to be wielded hard and fast and the ball is akin to a small missile.

“The game’s full of broken hands, split eyebrows and knee injuries but so far I’ve been pretty lucky. No surgery, but I did have a back injury that kept me on the sidelines at the beginning of 2013. My form’s been quite consistent so I’ve been selected to play for the national side on a regular basis.”

“I’m not sure if I’ve got another Olympics in me, I’ll have a think about that after Rio and a lot will depend on how my body’s holding up. There’s a World Cup in India around the corner and then the Commonwealth Games on the Gold Coast.”

“But I will admit, I still get butterflies thinking about the Olympics.”