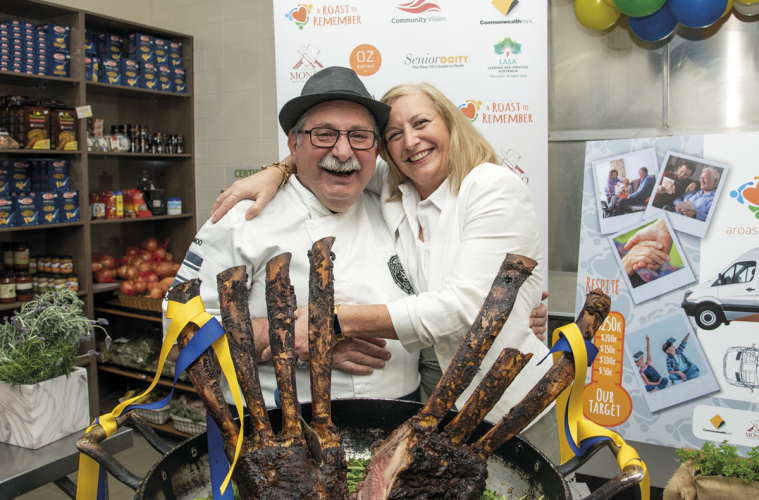 Reconnecting with the Elderly 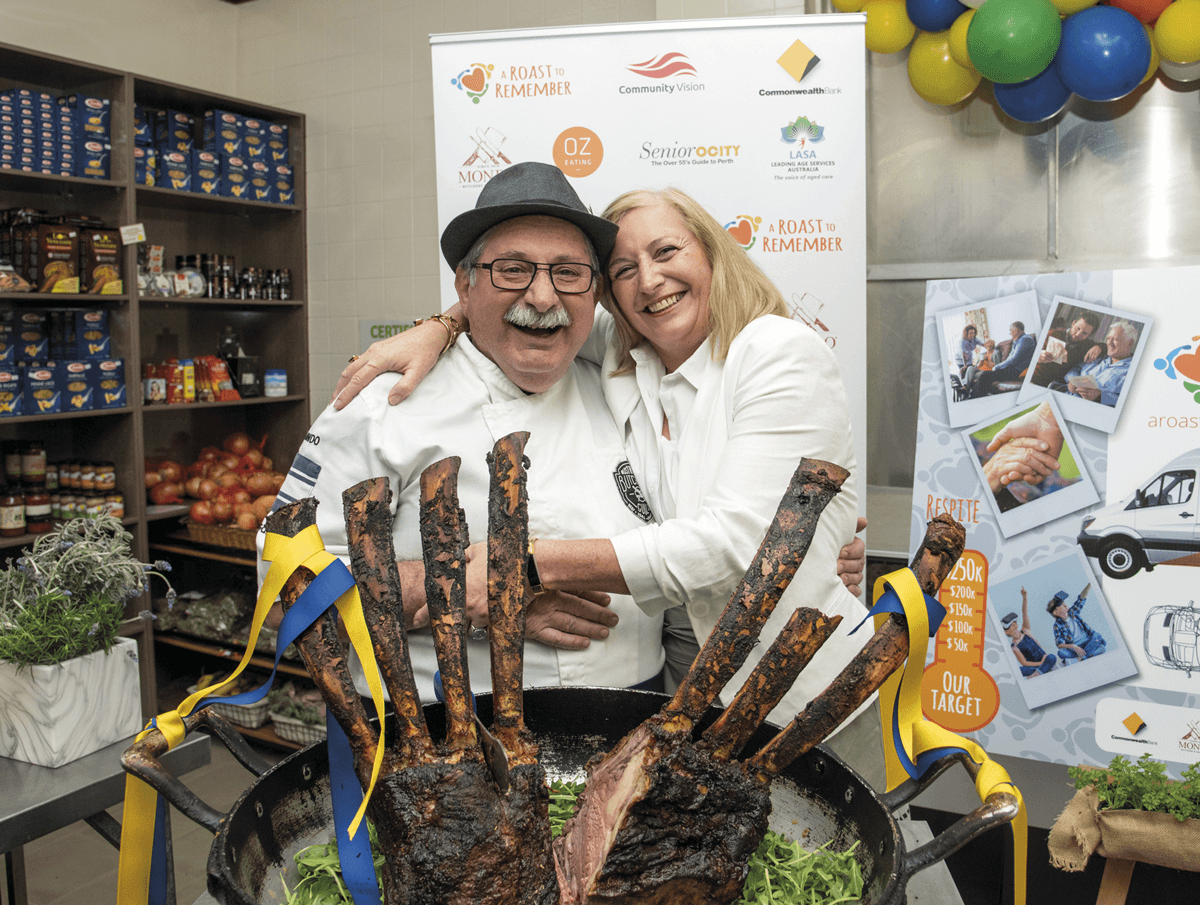 Community Vision CEO Michelle Jenkins with Vince Gareffa from Mondo Butchers at the launch of A Roast to Remember.

A few weeks back, not-for-profit Community Vision launched a campaign to raise awareness of dementia and the risks of social isolation that this can bring.

A Roast to Remember is raising funds to put a bus into the community to reach people who need more information and \ don’t know where to turn to for help. Community Vision CEO Michelle Jenkins said A Roast to Remember aimed to bring a sense of community back into communities.

“It gives friends, family and neighbours a chance to talk about ageing and dementia while creating social connections over a good meal. People might even want to hold a street party and the ‘roast’ doesn’t have to be just a good old Roast Beef with Yorkshires, it can be a special meal from any cultural background,” she said.

“We’re trying to keep this really simple because it’s about connecting people in the community.” 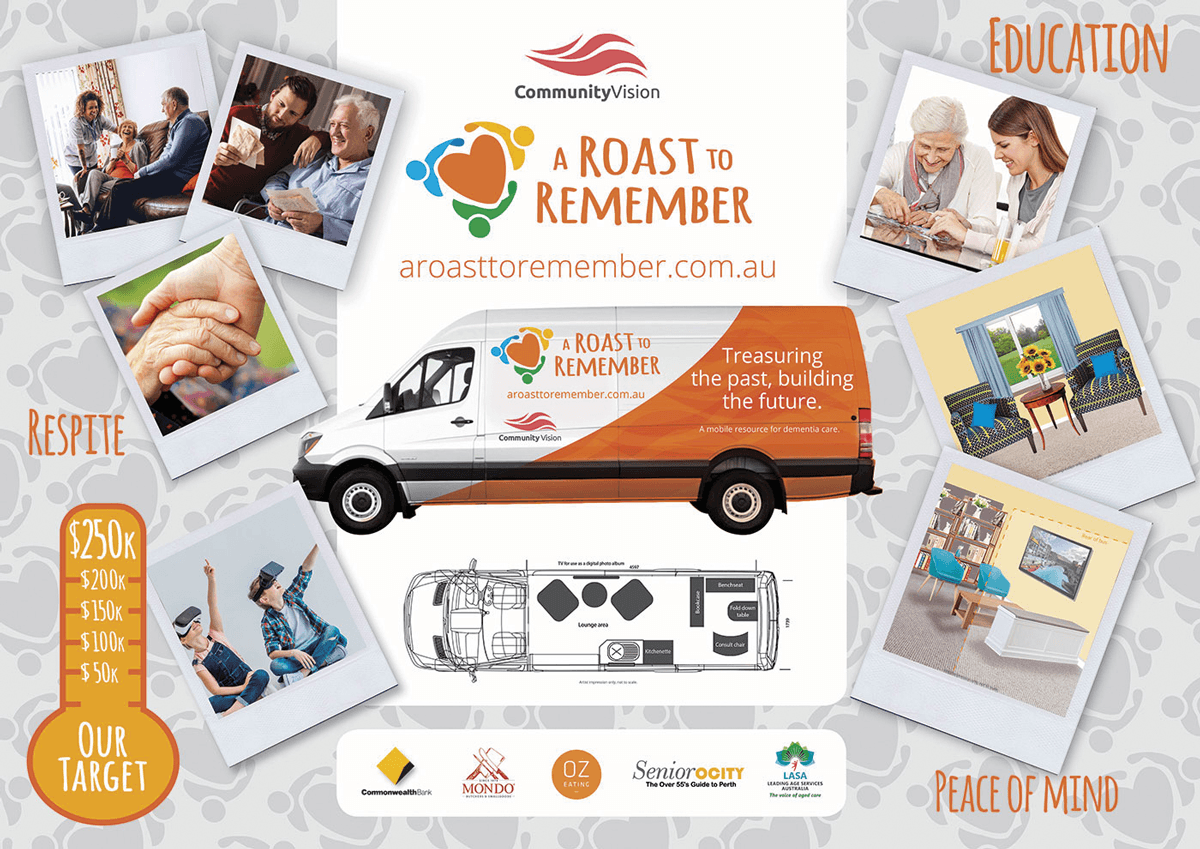 How a bus will help to improve the quality of life for those with dementia.

Michelle also hopes that the message gets through that if people see an older person struggling to cope with life and exhibits signs of early onset, or dementia, itself, there are people in the community who can help them.

“Organisations like Community Vision are here for a reason. We exist to help people and their families cope with the challenges of dementia,” Michelle said.

Community Vision has been delivering services to the elderly, especially those with dementia and disability, for the past 16 years.

Michelle said the organisation ran programs at the Woodvale Community Centre especially for those people with dementia living in their own homes. It not only gave clients stimulating activities, it also provided some respite for their carers.

Community Vision also run programs for those with disabilities at Kingsley, and also for veterans.

Aged care tricky for all

The transitioning aged care landscape – from HACC services to Commonwealth Home Support and Home Care Packages – was challenging for all involved, she said. For service providers it was balancing the budget around services they can provide, given the new funding arrangements that have moved from block funding to an individual basis.

“While the system is transitioning, there is a disconnect between the amount of funding available for services to the elderly both in the community and in residential facilities and the wages bill. There is no direct correlation between the two,” she said.

“If you are looking at award rates and the equal remuneration order that overlays that, the costs of providing services are going up, not down, yet there is only a flat fee which doesn’t recognise when that service is being delivered, whether it be during the day, or at night. It’s hard to balance that budget in those circumstances.”

“We are now reliant on individual funding per person, so it makes it harder for organisations to deal with people on a one-on-one basis, which means you have to look at providing some group services in order to balance that budget.”

The worry, says Michelle, is that as block-funded projects are phased out, some providers may decide it is not cost effective to deliver certain programs and ultimately consumers will lose out.

“Overall, it will probably pan out OK, we are in transition, but we are perhaps 10-20 years away from seeing the norm and everyone has to adjust to that.”

Those working in the aged care space, doctors included, find the navigating of this new landscape, complex, complicated and time consuming. If you are an old person, add frightening as well.

Michelle urges all parties to reach out to service providers early because it is their job to know what the changes are and their implications.

“It’s awkward for doctors and nurses to get their heads around this with everything else they have to do. If older people can be encouraged to access services earlier, there is a lot more that can be done for them in their community and in their own homes,” she said.

“There is a reluctance on the part of older people to ask for help early on. If they did, I am sure they would benefit. Tackling dementia and social isolation is a good start. The elderly and migrant populations who are bewildered by the system need support.”

“Traditionally they would turn to their GP for help, but if the GP doesn’t know, where do they go? They could end up at Centrelink and they probably don’t know either. We certainly see this with people coming off HACC and onto aged care packages.”

“With HACC, an elderly person may have had to contribute maybe $8 to their services and now being asked to give up 17.5% of their pension as well as being means tested to see what additional contributions they can make.”

“They get frightened that they can’t afford to pay out all this money.”

Michelle said the current generation, who have had 20 years of some compulsory superannuation investment, will not be in such an invidious position, but that’s not the case for those people now in their 80s and 90s.

“They might be sitting in a home in which they have a lot of equity but they don’t have much income. In order to access the services they need to stay in that home, they may need to leverage their assets in order to generate income, which in turn will be means tested. If they are not prepared to disclose their financial information, potentially they will be asked to pay the highest level of means-tested contributions.”

To add some accelerant, as of September 20, Centrelink has started means testing carers’ payments.

“Navigating through the My Aged Care website (https://www.myagedcare.gov.au/), getting someone to make a call or two and to get online and fill in all the paperwork, it takes time and there is a cost attached to that for the GPs.”

In a nutshell, My Aged Care is a triage service, determining eligibility and suitability for either home care packages (HCP) for the long-term, or Commonwealth Home Support (CHSP) if only needed in the short term.

The former requires an ACAT assessment to determine the level of care required and where that care will be delivered. The consumer signs off on who will deliver those services. The latter is assessed by a regional assessment team who will refer the required services directly to a service provider, who in turn can start delivering them relatively promptly.

Michelle said service providers had to be on top of the nuances of the system and from their perch they can see where things are working and where they are falling down.

“CHSP is very quick. A GP can ring or go online to the My Aged Care team and put in a referral and it will be processed through the database and comes to a service provider generally in about two weeks, sometimes quicker,” Michelle said.

“We have had situations where the regional assessment person has been finishing off in the home and we have been there to put services on. These people may very well need long-term help but they need urgent support now and that can start almost straight away.”

Controversial delays are being experienced around the allocation of the longer-term aged care packages, and Michelle says the delay varies, depending on where the individuals live.

“Regional and remote areas wait longer than in metro but the time frames are blowing out there now as well. It can be a couple of months before someone can get an indication of their eligibility,” she said.

“Even once they have been given the go ahead, they then have to wait until a package becomes available and that’s where the real delays are taking place because that can be anything up to 12 months in the higher levels.”

Medical Forum has heard that some people on Level 4 packages are waiting up to 18 months.

The consumer directed care model is also creating some bottlenecks.

“When someone has been given a referral they have a range of options. They might know who they want to deliver their services and that referral goes straight to that service provider. Or they may not know, so the referral is broadcast to all providers and one will pick it up, usually in that person’s area. Or it can be the consumer says, ‘leave it with us and we will seek out someone ourselves’ and shop around.”

“They have a period of time before they have to act on the referral so it’s tentatively allocated at that point, but that impacts on the person behind in the queue who may need that referral more urgently. It has to create a bottleneck.

The Minister for the Aged Ken Wyatt has recently announced the release of a new tranche of packages and it may be starting to be felt on the ground. Michelle told us that recently Community Vision has seen more higher Level 3 referrals starting to come through.

Michelle urges doctors to give her and other service providers a call with their concerns.

“If a GP has a patient who needs additional services, call and we can help that person to do a self-referral by liaising with the doctor. We are here to help people access services and the more we can work collaboratively to help people achieve this, the better.”