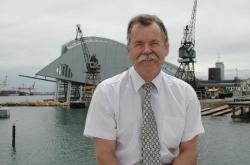 As a typical teenager, Graeme Henderson was unsure what career path he wanted. A 1963 fishing trip to Ledge Point (110km north of Perth) changed the course of his life. Graeme discovered the remains of the Gilt Dragon….

As a typical teenager, Graeme Henderson was unsure what career path he wanted. A 1963 fishing trip to Ledge Point (110km north of Perth) changed the course of his life. Graeme discovered the remains of the Gilt Dragon – a Dutch vessel shipwrecked in 1656.

“All I wanted to do was catch a dhu fish,” he recalled, adding that the discovery also involved his first brush with death.

“The strong currents rolled me across a reef and, with the high density of bubbles in the water, I had difficulty rising to the surface – even after dropping my weight belt,” he explained.

The Gilt Dragon was the first 17th century shipwreck discovered in Australia, and it sparked Graeme’s interest in maritime history to such an extent that he enrolled in history studies at the UWA. Upon graduating, he joined the Museum of Western Australia as a diver before completing his Master’s Degree and becoming Curator in 1977.

Graeme’s appointment as first Director of the WA Maritime Museum in 1992 meant hanging up his fins on a professional basis.

But the marine archaeological expeditions continued. One of his most interesting was the 1979 discovery of the Pandora. Sent to capture the Bounty mutineers – Fletcher Christian and his cohorts – it was shipwrecked off the Queensland coast in 1790.

Graeme also led the bicentennial project that located and explored the 1791 wreck of Sirus (the flagship of the first Australia fleet) on Norfolk Island, and headed a UNESCO mission to Alexandria in Egypt to determine if Cleopatra’s lighthouse (one of the seven wonders of the ancient world) and palace could be developed into an underwater museum.

In 2001 – as Committee Chair – Graeme provided the rules for the UNESCO Protection of the Underwater Cultural Heritage Convention. Ratified by 94 countries, these protect important shipwrecks in deep international waters.

The museum’s latest exploits have been in the news, at Coral Bay’s Ningaloo Reef where he previously explored the 1811 American Rapid shipwreck in 1980. The most recent discovery, thanks to airborne electromagnetic surveying – Correio da Azia, a smaller Portuguese ship. 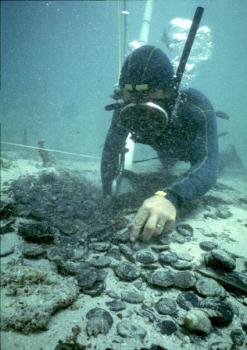 “Interestingly, this new shipwreck and the Rapid were shipwrecked on the way to Asia, with great amounts of silver coins on board to buy cargo: the Rapid had 280 Spanish silver dollars,” commented Graeme, who added that while silver coins and metal objects are highly durable in a marine environment, all salt water-affected paper and fabric exhibits undergo extensive treatment for fragile materials, once brought to the surface.

He said that uncovered artifacts provide insights into the lives of the crew and passengers at the time of each shipwreck, even relating to health.

“Needles, syringes and toothbrushes uncovered from the Pandora shipwreck, for example, gave us a great look into the medical and health treatment available to those on board the ship. We also discovered ointments for treating injury and venereal diseases, and still have not determined the use of some medicines. A number of sharp objects we uncovered were probably used to amputate limbs, because medical treatment was very primitive – especially out at sea, where people were handled in a much rougher fashion than on land.

“After viewing a doctor’s journal and finding a tiny cage at the stern in which people were locked, aptly named ?Pandora’s box’, we were also able to determine the social structure on board at the time of shipwreck.”

What about these modern times? How does Graeme think about his own health and that of our community?

He believes a positive and accountable attitude is the key to maintaining a satisfying lifestyle. “I don’t see doctors very often and prefer to keep it that way! I look after myself and have an optimistic outlook.”

“In order to render a healthier community, health education should be about the promotion of healthy lifestyles instead of dealing with sickness. Although I applaud the limitations set by the government on cigarette smoking, such as restaurant bans and advertising sponsorship, I think more genuine information about alcohol would be great, as I sometimes wonder about how much red wine [medical] advertising is funded by the wine industry,” he commented.

Encouraging physical activity was paramount, in his eyes. “Exercise promotion needs to go beyond outdoor and team sports, because most men – for example – quit playing competitive football matches by the time they turn 20.

How is he helping? “People who visit museums often experience a stronger sense of fulfilment in life, as they become comfortable about who they are and how they fit into the community, thereby reducing stress related diseases!” he concluded.