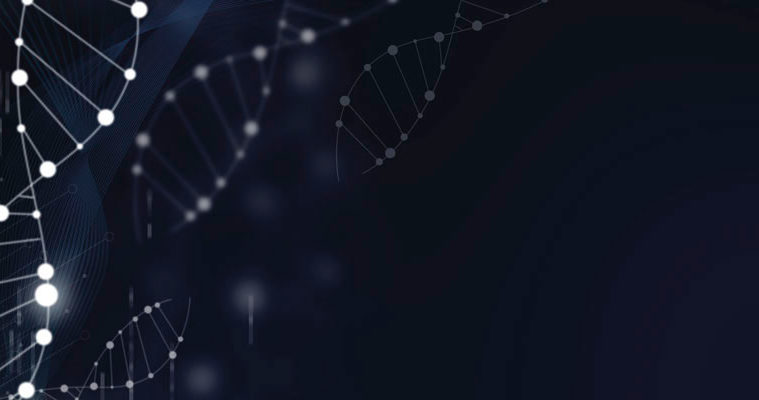 It’s probably fair to say that Australia’s Cultural Cringe has come a long way down the recovery path in the past couple of decades. As a knowledge nation, we have become more confident in our capabilities, and within those confines, have made some amazing, life-changing discoveries.

Think Marshall and Warren; Wilton and Fletcher; and numerous researchers of significant standing at institutions dotted around Perth and the country, all working on finding solutions to save lives.

However, news several years ago that the state government and local universities, in particular Murdoch, were not only going to build a state-of-the-art phenome centre south of the river, but attract two of the world’s most respected names in the field to run it, sent more than a ripple or two within national and international research circles. 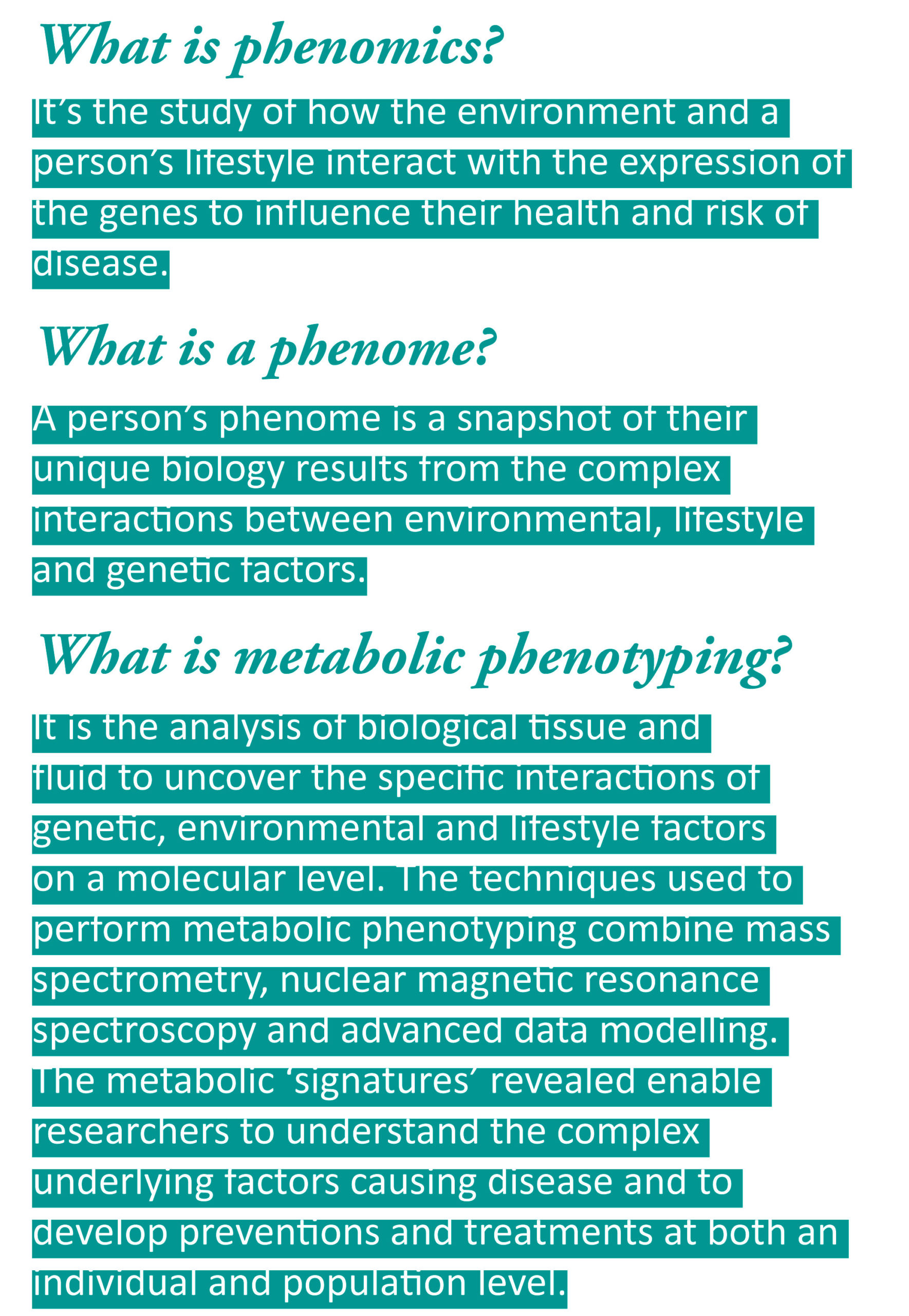 Not least at Imperial College London where the now leader of the Australian National Phenome Centre, Professor Jeremy Nicholson, was head of the Department of Surgery and Cancer.

He was one of the prime movers of Imperial’s phenome centre (the UK National Phenome Centre), which came into being as a happy indirect consequence of the enormous multi-billion pound spend on the London Olympic Games.

“That’s when the concept of the Olympic legacy came up,” Jeremy told Medical Forum. “The drug testing facility was absolutely enormous, so I wrote to the Chief Medical Officer with an idea to take that equipment and put to it broader use for large scale population phenotyping to better inform on people’s health,” he said.

“It ended up on the Prime Minister’s desk and, three months later, we had £10 million from the Medical Research Council and another £11 million from industry to build transfer laboratories. When politics and science align, you can do something that’s quite amazing.” 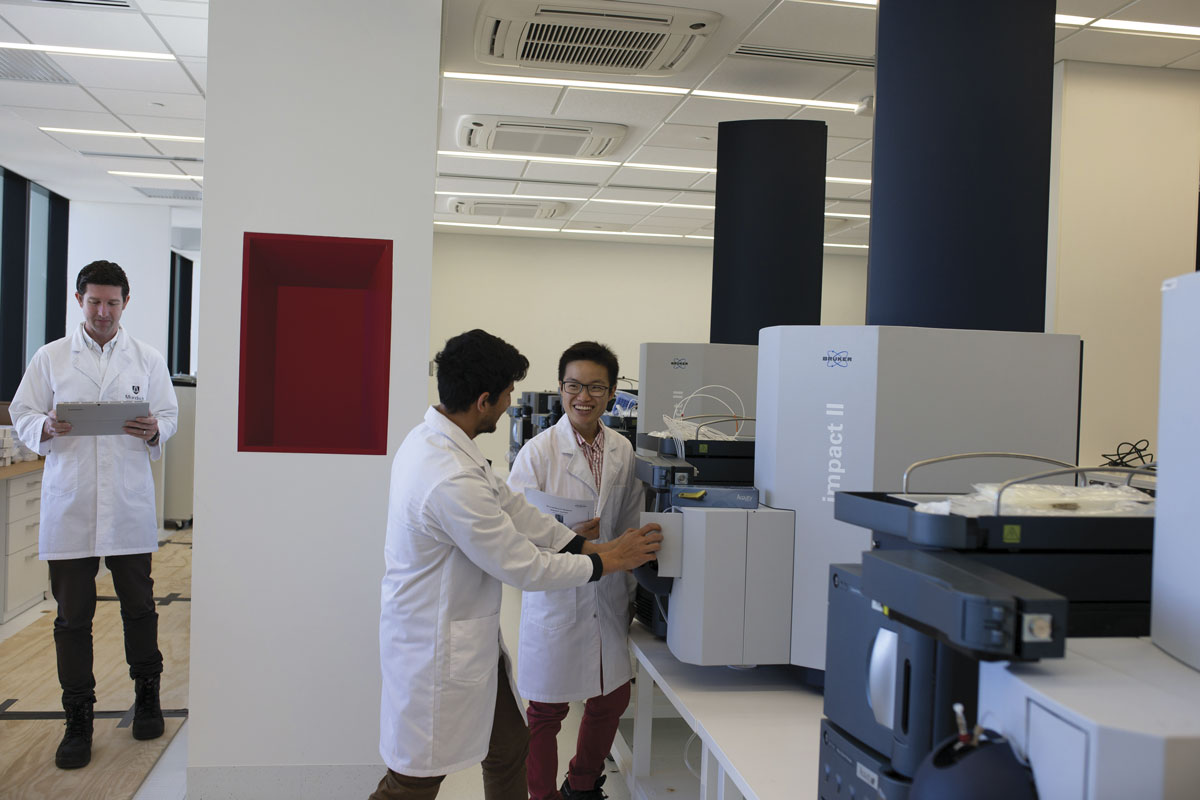 Those stars aligned in southern skies several years on, when other collaborative phenome centres were established in Hong Kong and Singapore, creating some seriously big health data capacity in the southern hemisphere. The idea was to have these large-scale facilities harmonise technology and approach so that the studies on the biology of disease could have global consequences.

“About four years ago, this Australian guy came bouncing up to me at a lecture I was giving in the US and announced ‘we’d like a phenome centre, too’. That guy was A/Professor Rob Trengove who was running the metabolic laboratory here at Murdoch,” Jeremy said. 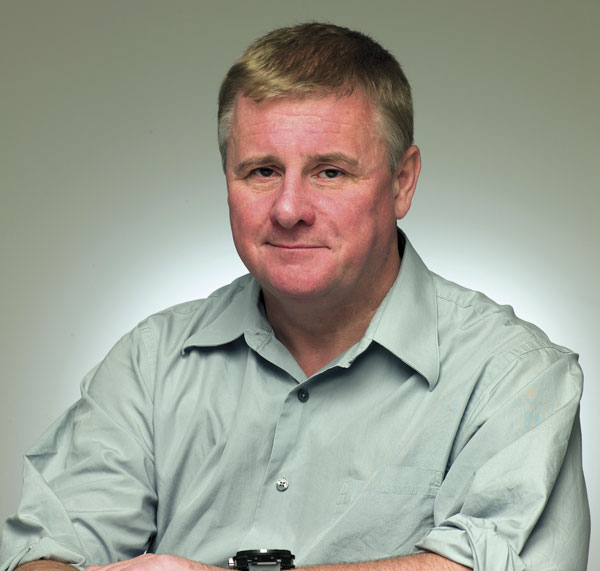 Talks with the Murdoch hierarchy about the scientific possibilities of a WA phenome centre quickly moved on to the Chief Science Officer, Prof Peter Klinken, and the Health Minister, Roger Cook, who had made no secret that on his watch he wanted to see an overburdened WA health system move towards sustainability.

Jeremy had his first brush with antipodean boldness when asked why didn’t he come to sunny WA to lead the operation.

“I’d been at Imperial for 21 years and was running its biggest department with 300 surgeons – they can be difficult buggers – and about another 900 other staff in cancer, obstetrics, gynaecology, critical care, hepatology, gastroenterology, systems medicine and ophthalmology. My budget was double that of Murdoch University.

“I had spent nine years dealing with just about every conflict, with almost every sort of clinician and personality. Certain branches of medicine really do attract a certain phenotype!

“It was an invaluable experience, but it did encroach on my ability to do science, particularly. So, the opportunity to establish an integrated laboratory from scratch, that is now the best in the world, with a brief that not only encompasses health but agriculture, food, nutrition – it is an adventure coming here.

“It is also a much more collaborative environment with universities and government. It’s a small pool and people have to get along and I like that. And then there’s the lifestyle of WA.

“But the real driver was the opportunity for the first time to study humans in the total environment.” Accompanying Jeremy is his colleague, the computational biologist Professor Elaine Holmes, who was head of Computational Systems Medicine at Imperial. She was awarded the WA Premier’s fellowship in phenomics in 2018 and her work will revolve around maternal and infant health, liver and gastrointestinal disease and metabolic diseases such as diabetes and dementia.

“We love the lifestyle here. It’s important for people to be happy in their environment as well as in their work and the move has proved to be infectious. We now have 10 former Imperial researchers here, so I’m not so popular at Imperial right now,” he said.

“I was just saying to Elaine the other day, we’ve got the group together again, and we’ll have that excitement we used to have 10, 15 years ago.”

The location of the ANPC is at the Perkins South building opposite the Fiona Stanley Hospital campus just in case anyone should forget the primary focus – the patients.

“I’ve been a head of a clinical department and the patient always comes first. It is important to do good science but imperative to make sure that it’s going to be something that really makes an impact on somebody’s life,” he said.

So, what can we expect of the ANPC, which has the potential to do so much? In clinical terms, the list is long.

“We can help in straightforward, precision medicine – stratifying diseases into different subclasses to try and optimise therapies. We can support clinical trials by understanding responders and non-responders to drugs and new interventions. We’ve got technology that can be used in real-time during surgery. And there is the potential to revolutionise clinical chemistry and chemical pathology.”

Broader projects are looking at the environmental impacts on the body, which open up areas of food production and nutrient composition.

“We have a Cooperative Research Centre (CRC) project – part of a $150 million study on precision foods – that is the first out of the bag. This is being funded by the ministry of Agriculture and links to about 50 different companies. Our technology will define more accurately the composition of food, particularly nutrient composition, so that a brand quality can be attached to it and, of course, its value increases.

“The powerful thing is, though, you can take those very highly characterised foods and do clinical nutritional trials so we know more accurately the chemicals that go into the body and record different responses. This raises clinical nutrition to a totally new level of molecular science.”

“We would not have been able to fund a project like that in London, or even the UK, but you can get it done in Australia because the agricultural industry is so important here. So, economically the research is significant.”

However, food is critical for human health and projects such as precision food will become a cornerstone in preventative medicine. With the acute sector facing an increasing burden from treating people with chronic disease, keeping people healthier is the key to sustainability.

“If you think about preventative medicine, it involves some very simple things. Don’t smoke, don’t eat too much, get some exercise. It can keep you healthy for a long time. Unfortunately, most people don’t do this very well. So, the precision food CRC project is really interesting,” Jeremy said.

“We not only better understand food and how it works, which improves its value as an Australian product, it also becomes a preventative medicine because we can start to understand, in a broader scale, the individual effects of different foodstuffs on people, and not everybody is the same.

“People are all very different in the way they respond to diet or drugs or anything for that matter. And that’s what a phenome centre is about. It is understanding that variation in biology which allows you to make predictions for the future.”

“So, for me, it was like all the planets aligned because we have the Phenome Centre right next to the hospital. We’ve got a change in the strategy for healthcare in Western Australia, which is a very sensible one. We have a big food project that comes in which is relevant to preventative medicine. Now what’s not to like about this.”

And then there is the treasure trove from WA’s and Australia’s history of quality epidemiological studies.

Prof Tim Davies’ diabetes study, the Telethon Kids’ Origins, Prof Bu Yeap’s HIMS project and, of course, the Raine Study, and, in Victoria, the Barwon study – all have longitudinal grunt.

“There are biological samples that go back years, so we can go back and do retrospective analysis of the phenotypes of people in epidemiological studies knowing after 20 to 25 years what their clinical outcomes have been. This allows us to model disease risk in a retrospective-prospective way,” he said.

“I have some big ambitions for this laboratory. I would like to phenotype everybody in Western Australia – and genotype them as well – to create a biobank that is relevant to our population. It’s not possible to do that somewhere like the UK. It would only be a small sample of a large population and that wouldn’t be representative.

“WA has 2.4 million people, it’s a quite a lot people, but it’s doable. You could do a much more statistically relevant proportion of the population here and have deep insight into the biology that affects their future health.

“Places where digital health care works, this sort of personal health care has made some advances, but the electronic records have to be good because we’re trying to take new chemistry and new science and match it with events which are against the conventional clinical metrics and wisdom.

“Here we are in a very high-tech environment in one of the best labs in the world with immense firepower but that doesn’t help Aboriginal people in the north of the state, or people in sub Saharan Africa. For me, it’s very much a duty of science to serve everybody.”

“One of things we’re going to be developing very soon is new, smaller, cheaper devices that can basically measure things in location. Our exploratory lab here is the Formula One of technology, but people in the field need technology they can take to the shops.”

“Ultimately there’ll be things that come out of what our work, that will be with your local GP in the next 10 years.”