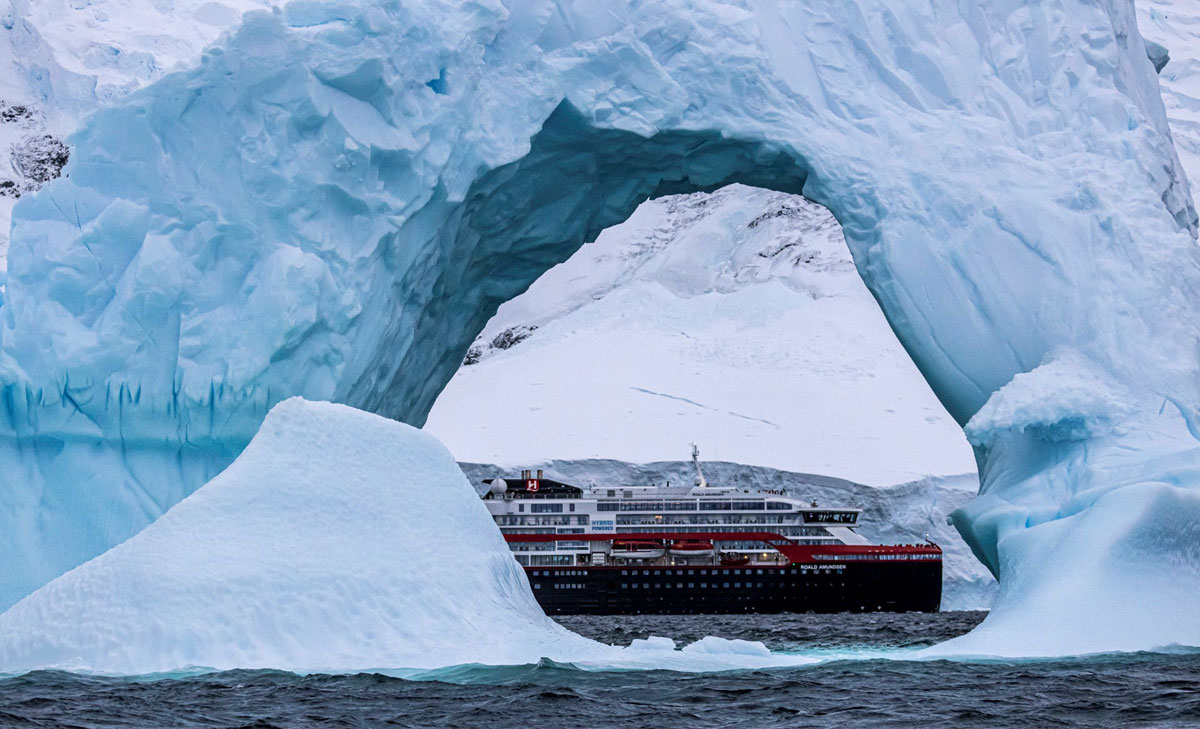 We left Perth on February 23 to join a GP conference to the Antarctic at a time when COVID-19 was looking like a MERS and SARS – a foreign problem that would be contained long before it affected us.

We had always wanted to see the Antarctic and with global warming escalating rapidly it seemed that the sooner we could go the better. So, when we saw an advertisement for a GP conference that ticked all of our boxes and more, it was our chance.

Being both GPs, the conference was a way of making the trip more affordable and the line-up of speakers looked impressive. 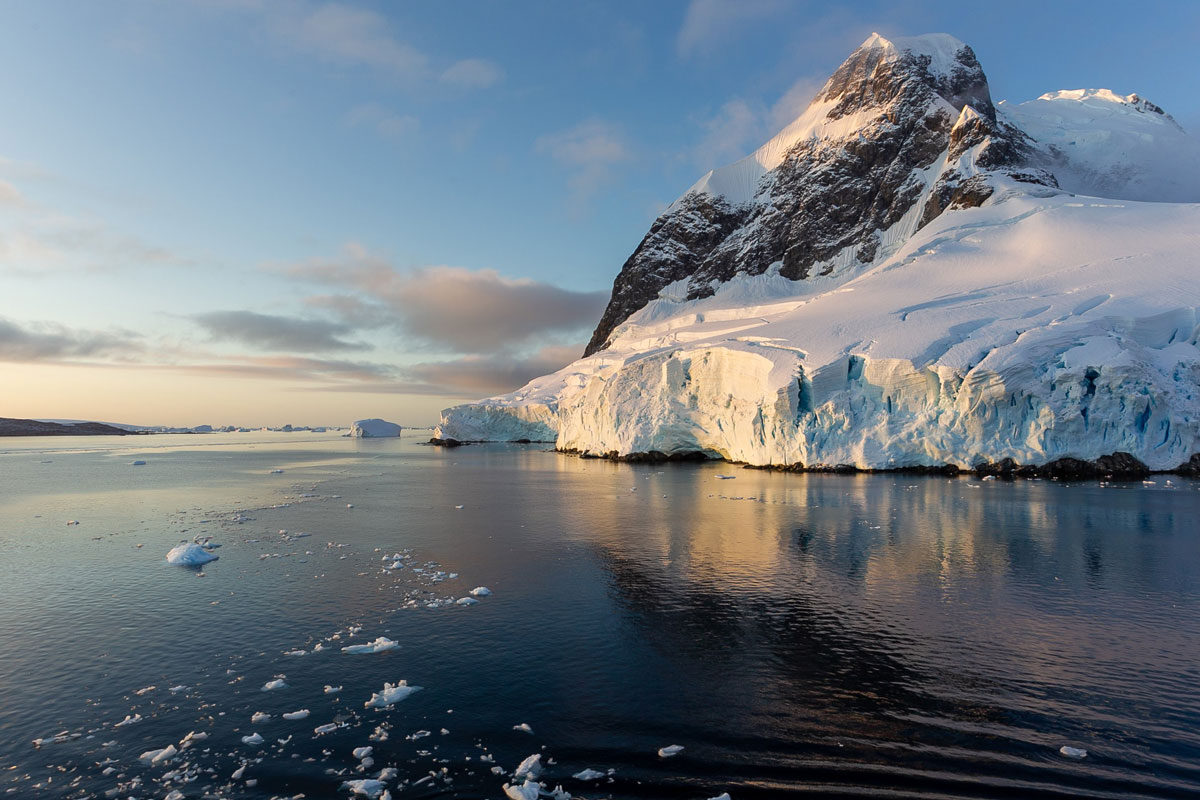 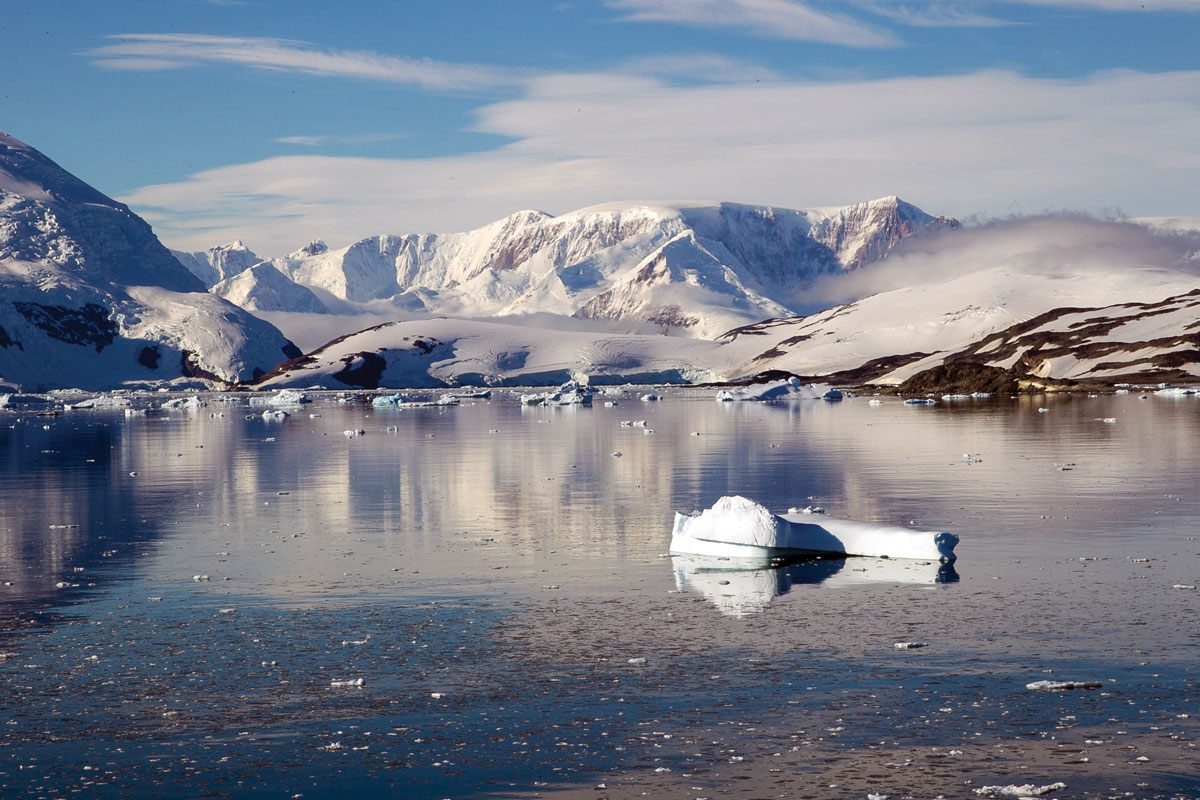 The trip was to start in Santiago where we gave ourselves a few extra days to look around before flying to Punta Arenas in the Magellan Straits to board the MS Roald Amundsen, a small, new Norwegian hybrid exploration ship.

Having always been cruise cynics, this was our first cruise and certainly not your average one. This was very much a scientific exploration ship with a team of scientists, a science centre and an expedition team on board. We would have the opportunity to go hiking and kayaking and explore on the ice as well as an informative conference.

We were blown away when we got on board. The ship was way beyond our expectations, full of sleek Nordic design and none of the superficial entertainment frills I associate with a normal cruise ship. 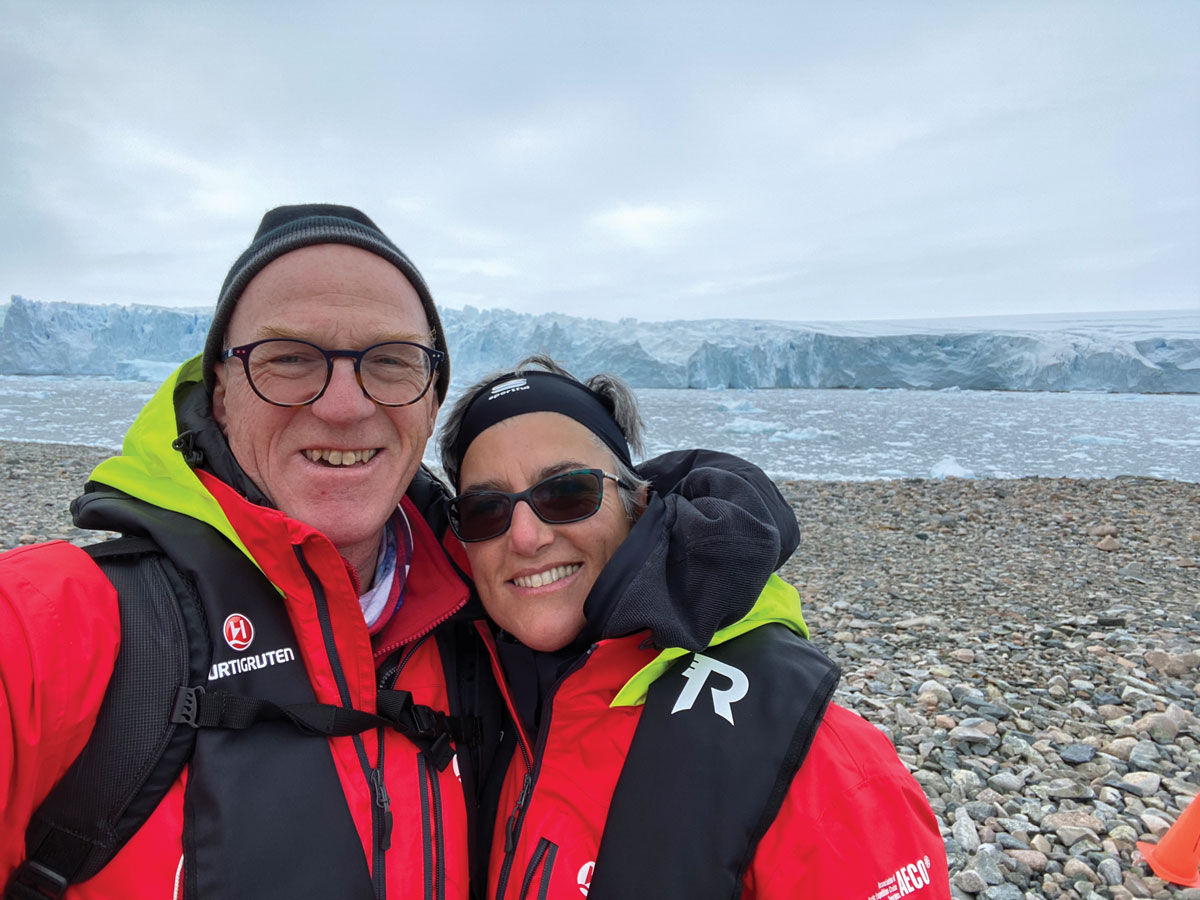 The Norwegian officers were full of humour and common sense so that the ship appeared to run with effortless efficiency. And our cabin was beautiful with everything we could want, including a lovely bathroom and a balcony. The trip was REAL! It was HAPPENING!

We sailed out of port and headed west to the Magellan Straits. We had never been so excited about a trip.

And it fulfilled all of our expectations. The scenery was outstanding, and the clear blue skies produced wonderful air clarity, amazing colours and fabulous photos, but the amount of bare rock and waterfalls coming out of old glaciers did remind us that it had been the warmest Antarctic summer on record.

It was great fun dressing up in our layers of new polar clothing, taking selfies, and waiting for our turn to head out in the zodiacs with our 12-person “Wandering Albatross” expedition group. We quickly made friends with the other team members who all shared our level of excitement.

There was a code of conduct to keep the continent pristine and the animals happy. We needed to keep 5m from penguins (but it was OK if they came to us); 25m from seals and sealions, and we had to walk in each other’s tracks to minimise damage to the delicate lichens and mosses. And we were absolutely not allowed to carry anything that could become litter.

The sea ice was exciting to plough through, especially brushing through it in the zodiacs; the number and variety of whales, seals and penguins was unexpected; the opportunity to have two polar dips was fun and exhilarating; the birdlife was wonderful; we went kayaking amongst the icebergs … like WOW. Incredible.

We even knocked back home brew vodka at the bar of the Vernadsky Ukrainian research base.

We had experts in everything on board, from whale research and photography, to Antarctic survival skills and history and storytelling, and microplastics. We even had Henryk who had been on an expedition to re-enact Shackleton’s terrifying 1917 trip from the South Shetlands to South Georgia – a 1300km voyage in a lifeboat through treacherous seas, to get help for his stranded crew.

We sailed as far south as Marguerite Bay, well below the Antarctic Circle which not many ships are equipped to do. We were on cloud nine the whole voyage.

We sailed north again to the Falklands. Having lived in the UK in the 1980s, we knew a little about the Falklands war, but it became very real when we were there. There is understandably no love lost for the Argentinians who occupied the island for a few weeks and left behind 120,000 landmines as a parting gift.

The voyage was at an end here and we had had our Captain’s Farewell with speeches, music and dancing the evening before our planned disembarkation.

We knew that there might be some issues due to COVID-19 as we had been following the saga closely, but the chances appeared good for a normal departure. Suitcases had been put out ready for collection. But at the last minute the announcement was made that no one would be getting off that day.

The mood changed and uncertainty reigned. And, so it was to be for the following 10 days while the whole of the Hurtigruten organisation tried to find somewhere for us to disembark. We knew that no one was ill on the ship and we knew that the only town we had been to in 16 days was Port Stanley in the Falklands where there was no COVID-19, but that wasn’t good enough for the ports of Chile or Brazil.

Finally, 14 days after leaving Port Stanley, and after a lot of high-level, delicate negotiations, the 330 of us were allowed to fly out from the Falklands military airport on two specially chartered planes to Santiago.

In Santiago, the Australian and New Zealand GPs in the group were ushered quickly through a sanitised corridor for a connecting charter plane which flew us directly to Sydney. We breathed a huge sigh of relief and a round of applause went up when the plane took off!

We were going to arrive in Sydney several hours before the enforced hotel isolation rule came in, so we would be able to get our connecting flight back to Perth the next day as planned.

Our relief was short-lived. On arrival at Sydney airport it became clear that no one knew what to do with us. The Ruby Princess had docked a few days previously and the minister didn’t want a repeat fiasco. We were left kicking around on our 1.5m markers wearing masks and being marshalled by staff in full PPE for over five hours until we were summoned finally by some senior AFP officers to be told that those who lived within 20 minutes of the airport and had transport could go home to self-isolate.

The rest of us could go to the airport hotel with a view to completing our onward journeys the next day. This was 3am and we had been travelling for more than 24 hours so we happily checked in and slept.

Next day we were preparing to leave the hotel for our 10.30am flight home, but we were stopped and sent back to our rooms to await police who arrived an hour later to serve us with a public health order that stated that we were a COVID-19 threat and needed to be contained.

We felt powerless and frustrated. We knew that we were safe. And it seemed that those who had left the hotel earlier than us had been free to take their onward flights or hire cars to go home.

The next thing we knew we had armed police outside our door, and we were to be stuck in the room for 14 days ordering room service pizza and chips with no fresh air.

Two days later, when it became clear that the airport hotel with rooms designed for stays of a few hours was not going to deal with full board for large numbers of people, we were moved to the Intercontinental in central Sydney.

This involved an extraordinary number of AFP and defence forces personnel, and a convoy of buses and police escorts with flashing lights. It was a high security operation!

So began our luxury hotel incarceration. We had a nice room it is true, but with tepid government rations in disposable packaging and plastic knives and forks, and a view of a building site. Fortunately, we had our lap-tops, our devices and free wi-fi, our holiday memories and each other. 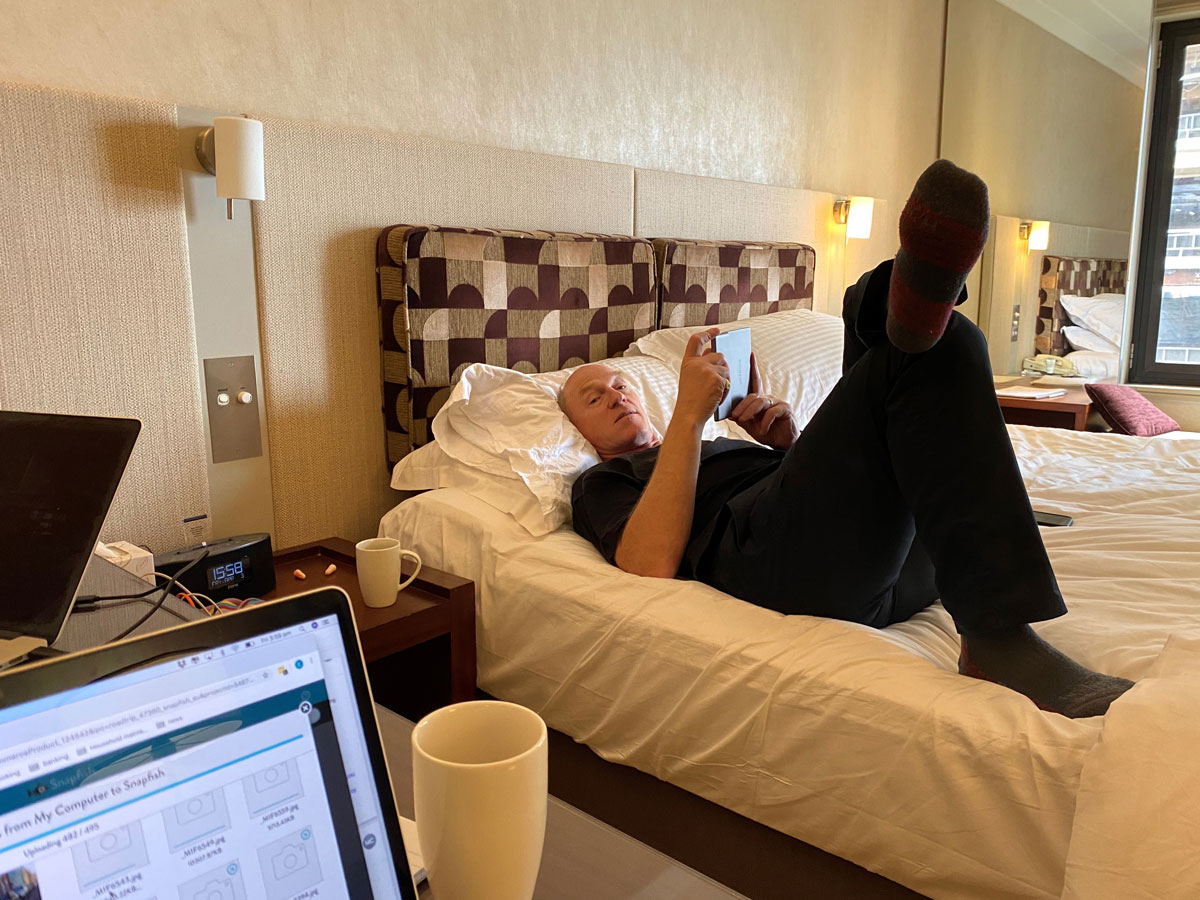 It was a win when we found a toilet brush and cleaning fluid outside the door, and we were given fresh linen one day. But we were treated as if we had the plague.

When I heard our meal being deposited outside the door, and I retrieved it before it went from tepid to cool, I had an admonishing phone call telling me to wait until the telephone call to say that we were permitted to pick it up. That call could arrive 10 minutes after, or 45 minutes, or not at all. The rules kept changing. Around this time, our travel party were cited on the news by the NSW chief of police as being the “absconding doctors” who had run away from quarantine thinking they were above the law.

Those who had gone home had done so with permission of the police. The confusion and miscommunication were enormous and we couldn’t believe that we were being blamed! An internal message group had been set up among other detainees from our convention, and it was going off!

We all tried to control the cabin fever and occupy the time usefully. I think we handled it as well as anyone else and better than many. We were guinea pigs in the very confused system.

Then Mark McGowan announced that the WA borders were to close, and WA residents were to get home quickly. Fortunately for us, this appeared to be a trigger for the police to review our public health order having realised that it really didn’t hold water.

All the emails, phone calls, and pulling of strings from a lot of angry doctors was taking its toll on them, I’m sure. So, the PHO was revoked.

It took another 24 hours for the wheels of power to release us from our rooms. We walked past a phalanx of police and security officers to the hotel exit. It felt like a guard of honour! And then, being cleaner than clean from infection, we felt very vulnerable heading into an infected world – at the airport and then squashed onto a jam-packed plane back to Perth with no chance of social distancing.

We narrowly escaped further hotel detention in Perth when a timely email from the NSW police came through to immigration which confirmed that we didn’t need any further quarantine.

After an extra 10 days on the ship, and eight days in a hotel room, we were FREE … to do another 14 days home isolation. We have never been so happy to see our home. We broke open the champagne and danced and sang with a very surprised dog!

Home isolation was going to be wonderful!