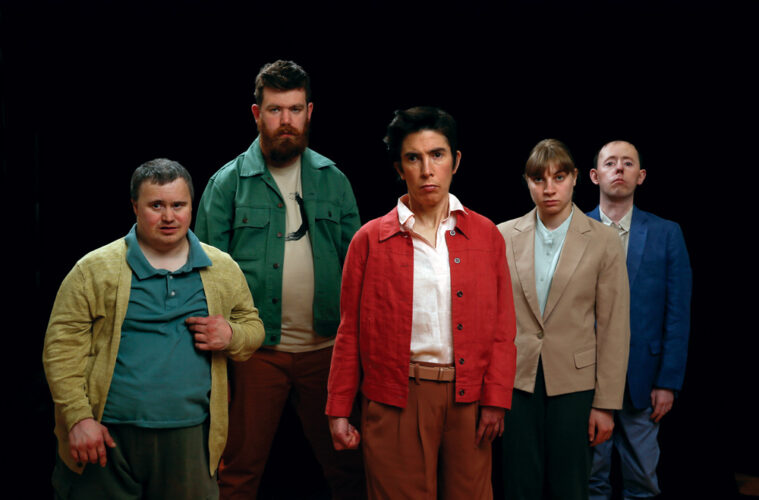 The annual Revelation Film Festival always brings together a thought-provoking cinematic collection. This year it includes a brave and captivating debut from a theatre company featuring people with intellectual disability – both actors and those behind the camera.

When their overseas performances were cancelled overnight because of the pandemic, the Back to Back Theatre company decided to take matters into their own hands as a way to keep working.

Not able to have audiences come to the theatre, they decided to take their ability to the world by making their debut film, entitled Shadow, despite not knowing a lot about how to do it.

Based in Geelong, Back to Back is one of Australia’s leading contemporary theatre companies committed to creating new forms of theatre with an ensemble of actors who have disability or identify as neuro-diverse. Directed by Bruce Gladwin, Shadow is a darkly humorous based on the company’s internationally award-winning stage play The Shadow Whose Prey the Hunter Becomes. The cast adapted the play to make a film using a combination of dramatic and documentary-style elements.

Shadow is the story of a group of activists who hold a public meeting on the future impacts of artificial intelligence only to discover their own prejudices are their biggest obstacles to saving the world.

What begins as a polite discussion quickly descends into bickering and chaos as one of the often overlooked and underestimated activists explodes while trying to unite the group, only to wonder if their message may already be lost.

As they couldn’t travel or perform live, the company wanted to find alternative models of story creation and storytelling. Shadow was created through conversation and improvisation over two-and-a-half-years.

“Our objective is always to make great art and engage with audiences and explore themes relevant to contemporary audiences,” says Gladwin, who also wrote the film. “The by-product of that is around inclusiveness and diversity. “Our ensemble is made up of people with intellectual disability and who are neuro-diverse, and we’re interested in finding other representations of them outside stereotypes or what you expect.

“Maybe there is an expectation that we are going to represent a group of disability advocates where they are more holy than holy, but they are just as human as everyone else. We need to represent people in ways that are human but also be really clear there’s still misogyny or racism presenting in these characters.”

The performers are also the film’s co-authors with 95% of those on-screen being people with disability. The company also created a model where the majority of the crew roles were fulfilled by interns who identify as people with disability. As some of them had no previous experience in their roles – like camera crew or make-up artists and wardrobe – they were supported by professional mentors.

“For some of the crew, their understanding of how film production works is based on watching TV. So, we brought in amazing experts and experienced crew to support them learning.”

Gladwin calls this community filmmaking as the theme and its philosophical approach to the process of creation are intrinsically linked.

Specialising in adventurous theatrical works, Gladwin personally hit a steep learning curve moving into film. He says having the energy of 30 people in the room was exhilarating and exploring the subtleties of film, which are so different from live theatre, was incredibly exciting.

Shadow screens as part of the Revelation Perth International Film Festival in July. There are films screening in cinemas and online. Tickets and information at revelationfilmfest.org