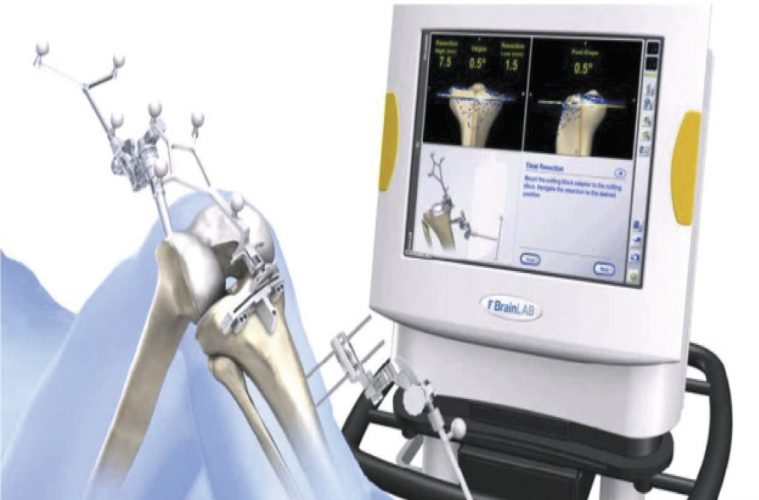 For 15 years, the aim of computer navigation has been to improve the precision and accuracy of component positioning in total knee replacement (TKR). In the UK and the USA only 3-5% of TKRs per year use navigation as part of computer assisted surgery (CAS) whereas in Australia, CAS navigation has increased to 30.8% in 2016 (from 2.4% in 2003).

ED: The jury is still out on computer use in TKR. Can we afford it and with our ageing patients will it lessen revisions?

Given the similarities between the three countries in many aspects of surgical practice, the reasons for this difference are hard to fully elucidate. While current evidence demonstrates that computer navigation improves component alignment in TKR, apart from one subgroup of patients <65years (see below), there is no demonstrated clinical superiority of CAS in terms of improved reported outcomes and/or decreased revision rates in the long term.

Without CAS – what is done In this way, the overall mechanical alignment of the limb is neutral +/- 3 degrees and the line of force is transmitted from the centre of the hip and the middle third of the knee, to the centre of the talus (Figure 1). Deviation of the mechanical axis away from neutral alignment results in abnormal forces. As well, most TKR components are designed so the bearing forces are transmitted perpendicular to the bearing surface.

Optimal alignment for TKR has been debated hotly in the orthopaedic literature, with the neutral mechanical axis challenged by proponents of “kinematic alignment”. Despite this debate, the importance of post-operative alignment goal, in terms of TKR longevity, has been clearly established.

Alignment using computer navigation is more reliable and reproducible than manual guides and multiple systems now exist with rapid advancements in computing power stimulating the next stage in CAS, robotics.

Is CAS better or not? Figure 2. CAS for TKR – one such system

As Friedman et al said (2017), the value of new technology (benefit divided by the cost) is an increasingly important issue in medicine, and in orthopaedic surgery in particular. There is an increased initial cost of using computer navigation for TKR, estimated by Novak et al (2007) at up to $1500 per case, however the potential cost saving of reduced revisions if improved alignment is proven to increase survivorship needs to be considered.