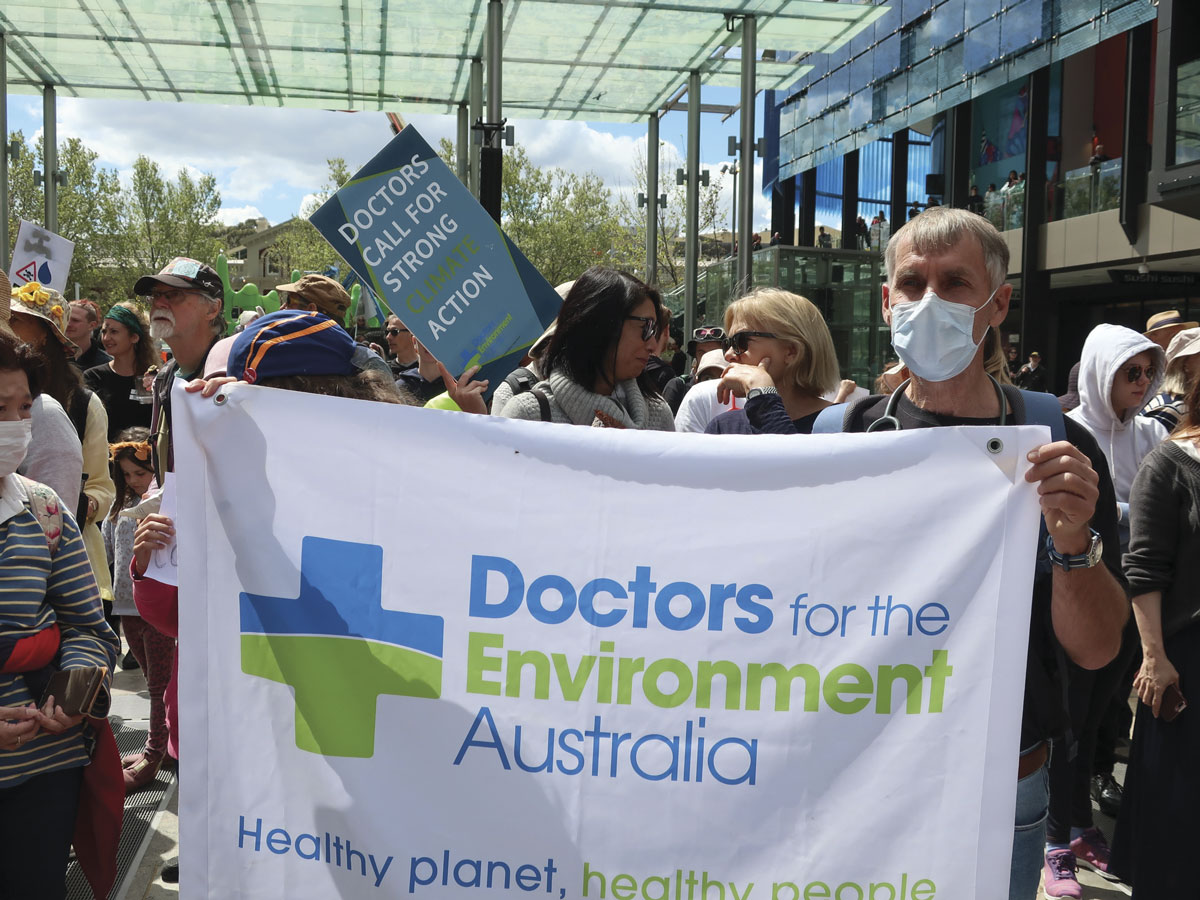 The School Strike for Climate and the campaigns of the climate group Extinction Rebellion have resonated with the WA health community standing up in greater numbers than ever before.

The Flood the City action in October followed a week-long series of protests around the CBD and outside mining company headquarters and media outlets. We know some doctors took part in those protests.

The Climate Strike which took place nationally on September 20 attracted about 300,000 protesters with estimates of the Perth crowd being between 10,000 and 15,000, with marches also taking place in regional and rural centres all over the state.

Among them were representatives from the WA chapter of the Doctors for the Environment Australia (DEA).

GP Dr Deborah Field, who has been a member of DEA for about 15 years, has only recently stepped up her activism. She spoke to Medical Forum to explain why. 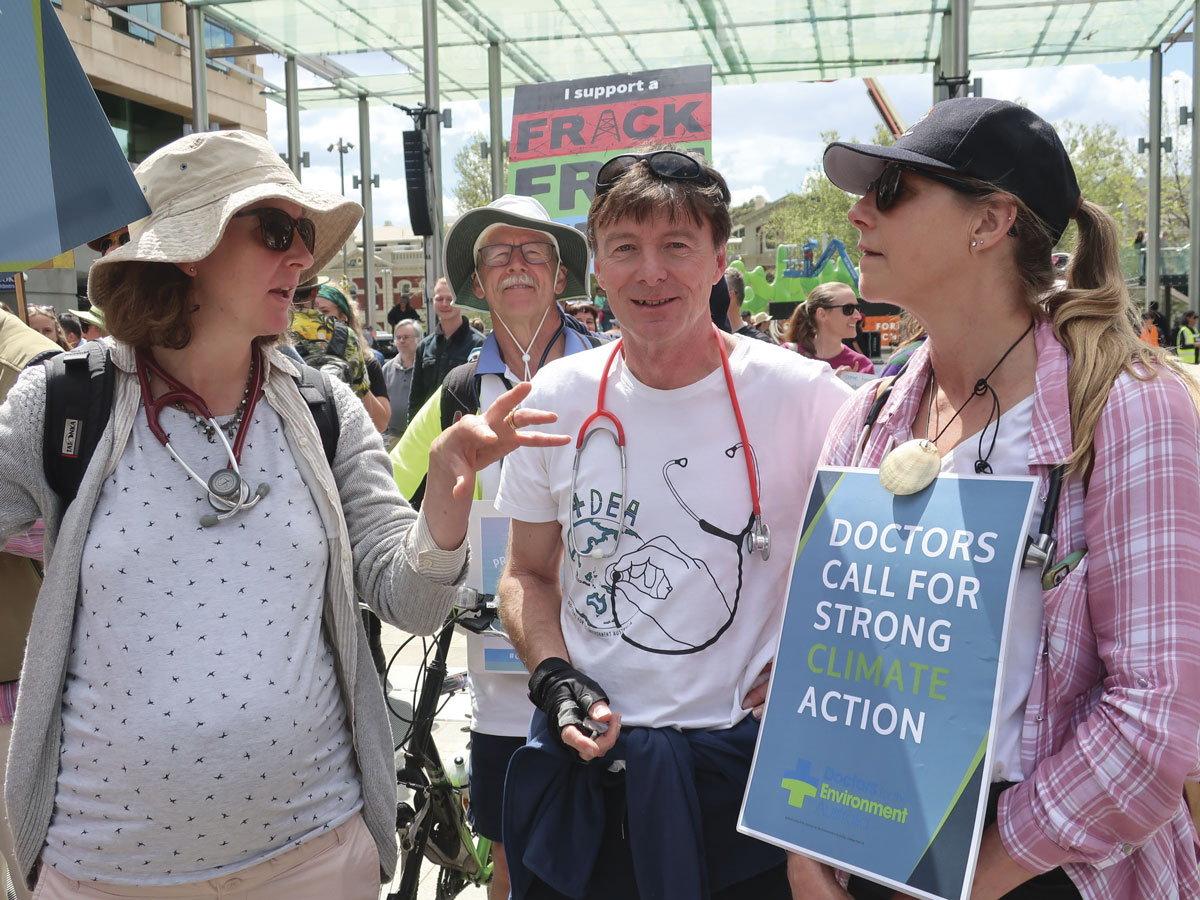 “After the last election, I realised that Australia’s climate inaction was going to continue for another three or four years and I felt that as a mother of two children I couldn’t turn my back on it for their sake and the sake of their children,” she said.

“I have been happily just paying my subs and felt I was doing my bit but I now feel I have to do something personal because to do nothing is unacceptable.”

“I’m now more involved, attending meetings and doing some secretary tasks. I know from my own practice that there are a number of doctors who are really concerned about climate change and the health implications but feel overworked and overwhelmed. There’s a lot of doctors on the cusp of wanting to do something but not knowing what to do.”

“But doing anything is better than doing nothing. We need to generate some hope.”

Deborah is heartened by the growing recognition of the health crisis as a result of a rapidly changing climate.

With the AMA joining the RACGP and the Royal Australian College of Physicians in developing climate change position statements on the issue, a mainstream swell is starting to occur. “The DEA has been chipping away for a long time, raising awareness, so if the other specialist colleges develop climate change position statement sand we all work together, that’s a big medical lobby group that could make something happen in government,” she said.

“A study out of Harvard suggests that 75,000 people is the number required at the grassroots level to influence a government policy change. The climate strike saw 300,000 people take to the streets so that’s a great start.”

The Climate Strike movement was born from the growing concerns of young people around the world, prominently voiced by Swedish teenager Greta Thunberg who has taken the fight all the way to the UN.

September’s strike in Australia and here in Perth was organised by young people and Deborah said it was exceptionally well organised, both starting and finishing on time.

“It was colourful with a real feeling of solidarity. There were a lot of adults there supporting the young people and from groups I had never heard of – architects, medical mums – all these groups were coming together,” she said.

“All the speakers at the rally were young people and they were articulate, passionate and well-informed. And they’re not asking for much. All they want if for governments to stick to the commitment they made to the Paris Agreement.”

“As citizens of the planet, we have to do everything we can with everyone we can to do anything we can, whether that’s putting up a poster outside your house, moving to solar power, composting, all those small things.”

“But as a health professional I’m going to focus my energies into DEA because there are many here in WA, especially Dr Richard Yin and Dr George Crisp, who’ve been speaking out for years few years now, and I want to support them.” 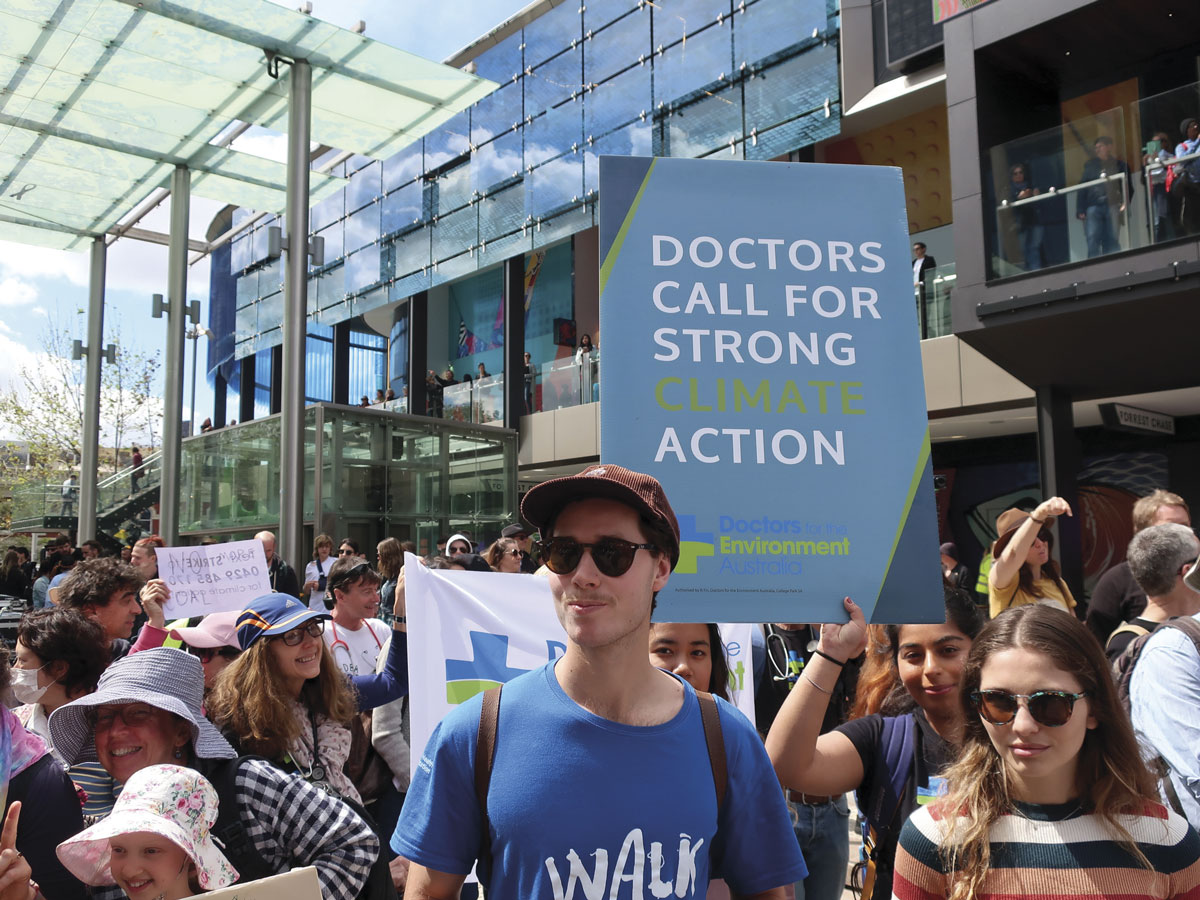 WA Health has launched a Climate and Health public inquiry which has moved into its public formal hearings stage before the reporting deadline of March next year. The DEA were among groups such as NMHS, EMHS, CAHS and Telethon Kids to have addressed the inquiry. Groups lined up to address the inquiry are AMA WA, Department of Health and SMHS.

Deborah said she put in a submission, the first time she had ever done anything like it.

“I used the discussion papers with all the quotes and scientific references provided by the Conservation Council and DEA. When I read through them, I was horrified and decided to express the depth of my concern as a GP and as a concerned mother.”

“Everyone can participate in these inquiry processes.”

“In my GP practice, we probably see a couple of hundred patients a day and I would love us to gradually make the point to them that we are attempting to be as green as we can. There might be some non-believers but doctors are respected and people do listen to us.”

The WA branch of DEA are holding some of their meetings using video conferencing so people who are unable to attend physically can join the conversation.