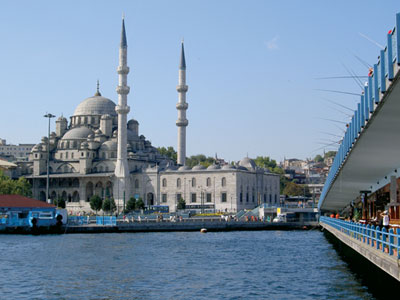 The gigantic Selimiye Military Barracks in Istanbul is home to a small Florence Nightingale Museum at the very site where, as a 34-year-old, she cared for wounded soldiers during the Crimean War (1854-1860). Britain, France and Turkey were taking on the Russians. It was her experiences here over two years that strengthened her resolve to establish nursing as a profession.

Today, a brief ferry ride to Scutari on the Asian side of Istanbul and a short walk up the hill gets you to the security gate of the still active barracks. If you earlier faxed through your passport ID and booked a tour, you will be met by one of the many conscripts doing ‘soft’ national service. No cameras. A military escort takes you along spacious corridors lined with photos of Turkey’s military leaders to the small museum in one of the four original towers that was her accommodation alongside the areas converted to wards.

Florence Nightingale memorabilia as well as more current artifacts related to nurses and nursing adorn the walls and display cabinets. For example, you can read a letter she wrote back to the British Army to ensure one of her young wounded received full pension rights on return. The accompanying serviceman is well versed in important historical facts, including the Turkish army’s history. As you leave, and provided they can find the key, you can purchase some slightly kitch momentoes from the small in-house store. Florence Nightingale, named after the Italian city she was born in while her wealthy British parents were travelling, was raised mostly in Derbyshire, England, and received a classical education from her father. She had her religious ‘calling’ in 1837, in the family home gardens at Embley, and thereafter took an interest in the social questions of the day. This included visiting the sick and investigating hospitals and nursing. Her parents did not consider nursing was a suitable profession for a well educated woman. But when she set off on her European travels, she met Pastor Theodor Fliedner’s hospital and school for deaconesses at Kaiserswerth, Germany, later returning to undergo three months’ nursing training here as well as the Institute of Saint Vincent de Paul in Alexandria, Egypt.

When reports in The Times criticised the British medical facilities for the wounded fighting in the Crimean War, personal friend and Minister at War Sidney Herbert, appointed her to oversee the introduction of female nurses into the military hospitals in Turkey. She arrived at the British barracks-hospital at Üsküdar on November 4, 1854, with the party of 38 nurses. When fresh casualties arrived from battle soon after, her initial snubbing dissolved.

Florence Nightingale’s advocacy for soldiers fell well outside nursing – sending wages home to families, reading library, etc – which made the introduction of female nurses to military hospitals an outstanding success.

A public subscription was organised in November 1855 so collected money could be used to enable Florence Nightingale to continue her reform of nursing in the civil hospitals of Britain. In 1856, she campaigned for a Royal Commission to investigate the health of the British Army. When Sidney Herbert was appointed chairman, she continued as a driving force behind the scenes. In 1860, she established the Nightingale Training School for nurses at St Thomas’ Hospital where probationer nurses received a year’s training, mainly practical ward work under the supervision of the ward sister. Her support for the school continued for 30 years. That year, her Notes on Nursing were published, laying down the principles of nursing: careful observation and sensitivity to the patient’s needs. Florence Nightingale was bedridden for many years but she campaigned tirelessly to improve health standards, publishing 200 books, reports and pamphlets.

Through her efforts the stature of nursing was raised to a medical profession with high standards of education and important responsibilities.