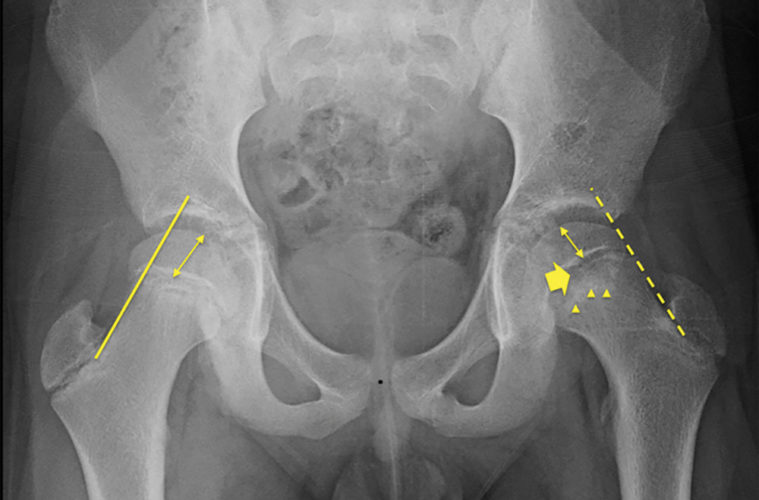 Slipped capital femoral epiphysis (SCFE), or slip, is a disorder of the proximal femoral growth plate leading to slippage of the epiphysis relative to the metaphysis. It is one of the most commonly missed diagnoses in children, which can result in delayed treatment and increased morbidity. 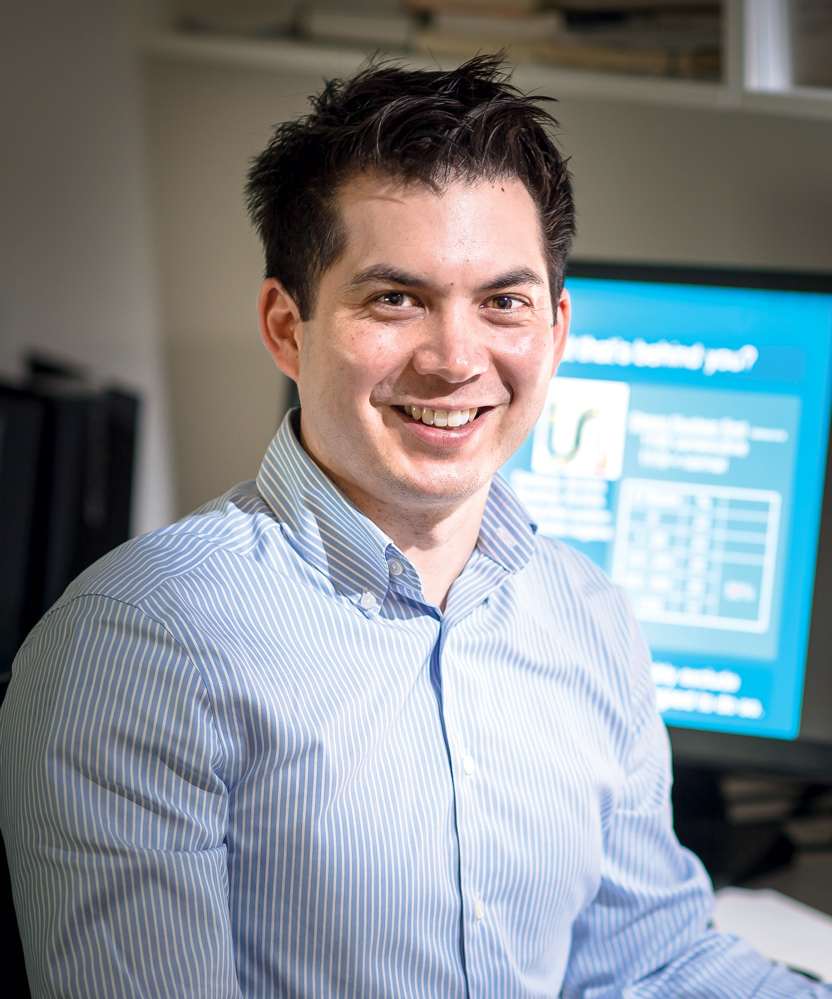 The peak age at diagnosis is 11 to 13 years in girls and 12 to 14 years in boys. The diagnosis needs consideration in younger children, particularly with co-existing endocrinopathies such as hypothyroidism, growth hormone deficiency and renal osteodystrophy.

Pain and limp are the most common presenting symptoms, but the pain can vary in severity and location, sometimes only being felt in the distal thigh and knee. The majority of children with a SCFE are above the 90th centile for weight. The incidence is higher in African Americans, Hispanic and Pacific Islanders. 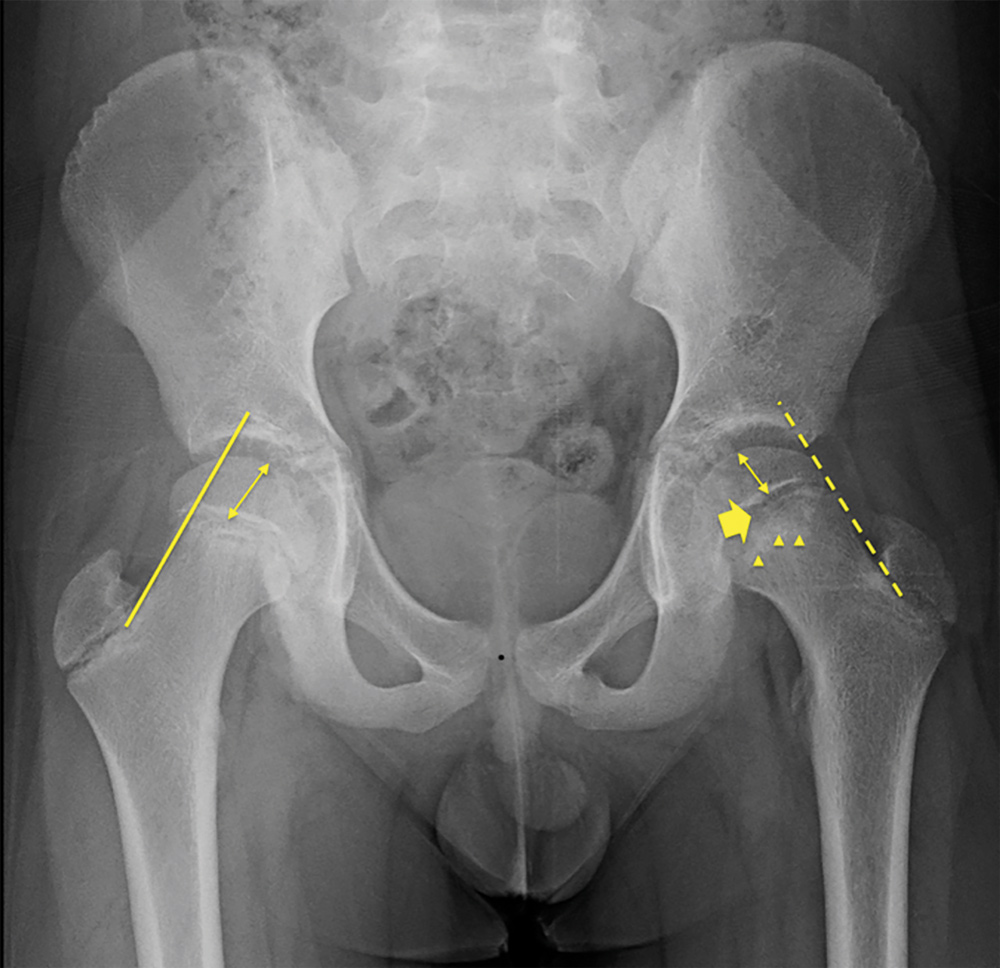 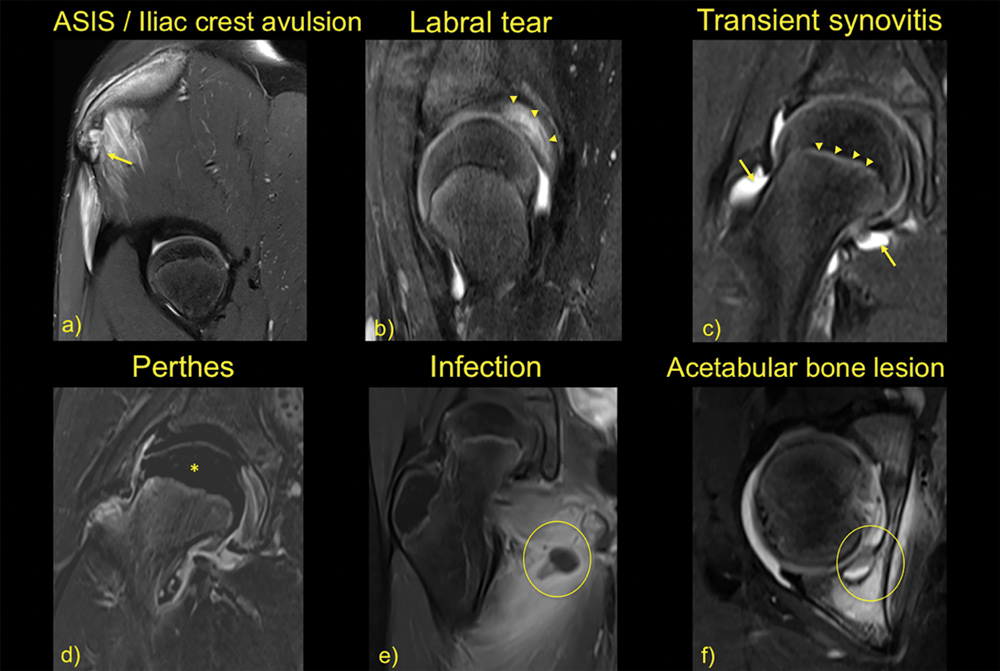 About 20% of SCFE are bilateral at presentation and there is risk of developing a contralateral SCFE within 18 months of a unilateral slip.

Radiographs are the imaging modality of first choice. Diagnosis can be made on an anteroposterior (AP) pelvis view although, as the epiphysis usually slips posteromedially, the lateral radiograph is very useful for confirmation.

In suspected SCFE the diagnosis is made on radiographs, so MRI is generally not needed and does not alter treatment. MRI may be performed first because another diagnosis is suspected, and MRI is more sensitive for detecting other conditions causing the same symptoms. Slips are well depicted on MRI with increased fluid signal along the growth plate and abnormal alignment of the epiphysis in relation to the metaphysis. MRI can be useful to diagnose very early slip or ‘pre-slip’ where radiographic findings may be normal or equivocal.

Trauma-related injuries such as ASIS/iliac crest avulsions (6a) or labral tears (6b) can cause similar symptoms to SCFE. Transient synovitis (6c) usually occurs in younger children than SCFE although overlap occurs. On imaging it presents as an isolated hip joint effusion (arrows) with a normal growth plate (arrow heads).

Perthes disease or osteonecrosis of the femoral epiphysis (6d) generally occurs in a younger age group. Imaging shows loss of epiphyseal height with perfusion imaging showing loss of blood supply (*). Children with osteomyelitis and associated soft tissue collections (6e circle) may have associated fever and raised inflammatory markers although in the early stages may present in a similar fashion to a slip. Bone lesions should always be considered, sometimes visible on radiographs but usually better shown on MRI (6f circle).