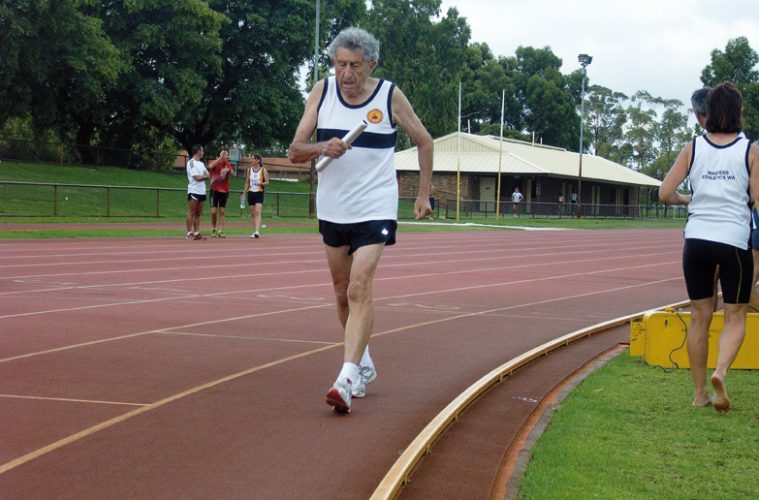 Dr Cecil Walkley has led a life of perpetual motion and there’s no sign of that stopping anytime soon. The 87-year-old recently competed in a steeple-chase in honour of a running colleague and will be lining up for the Masters’ athletics next month.

“Running, for me, is all about keeping fit. We can’t do anything about our genes – well, not yet anyway – but you just have to keep moving. That’s the secret and it doesn’t matter how old you are.”
“I’ve run 26 marathons and hold the WA record for the oldest runner to complete the distance. I was 80 when I ran it in six hours three minutes, and I was pretty angry about the three minutes!”
“How much longer I can keep doing this god only knows!”

Running to medicine
Cecil’s passion and talent for running goes back a long way and helped pave the way for a career in medicine.
“I grew up in England and in the late 1940s I won a Kitchener scholarship, which my running ability helped me secure. That gave me three years at Cambridge to study medicine and then another three at the Westminster Hospital in London.”
“In those days I ran against Roger Bannister (who ran the first sub-four-minute mile in 1954) many times, and he always beat me! We both qualified as members of the Royal College of Surgeons on the same day. In fact, we did our vivas on the same morning.”
“It was very nice to be invited back to run for Oxbridge against Harvard and Yale in 1993.”
“It’s been a lot of fun and pretty interesting, too. I represented England against Scotland and Northern Ireland, and I also ran for Kenya once. But the latter was only because their runner was ill.”
That’s not the only connection Cyril has with Africa.

Working in volatile Africa
“I joined the British Army, did six years in the Royal Army Medical Corps and ended up in the King’s African Rifles including a stint as a field ambulance paratrooper. I looked after Jomo Kenyatta and Idi Amin, and was seconded to work with Paramount Pictures on the film, Hatari, where I met John Wayne on a few occasions.”
“If I’d stayed in the army it would have meant moving more and more into administration and I didn’t want that to happen so I came to WA in 1962. I was intending to do tropical medicine but RPH had that position filled so I went to work as a GP in Narembeen.” “It was a lovely practice, delivering babies and doing some surgery. My best years in medicine were in the country, farming people are different and very special. It did become a bit frantic at times and I was waking up in the middle of the night convinced that the phone was ringing. It wasn’t, so I guess I was a bit stressed.”
“After that I went back to England to train in rehabilitation medicine, it was called Physical medicine in those days. And then I came back here, did a lot of sports medicine and I actually still see five patients now and then.”

Family that runs together
The running genes are a thread in the Walkley family and helped to give Cecil his most memorable long-distance race.
“My daughter is a very good runner and we ran together in the Comrades Marathon [89km] in South Africa. I did that when I turned 65 and it was a real thrill, probably the biggest achievement of my running career.”
“I think it’s a very good thing for an older person to have a small dog, and I’ve got two of them. Exercising them helps to keep you alive! I take them down to the local park and run around with them for 40 minutes.”
Cecil admits that he’s had a fortunate life and that fate could easily have dealt another set of cards.
“My father was in the army when World War II broke out and we were evacuated from Egypt back to London. We ended up dodging a few bombs in the Mediterranean. I’ve hardly ever had an injury due to running but I had a few when I was a paratrooper.”
“I got blown up in Cyprus. The chap standing next to me was killed but I only received minor burns to my feet.”
“I’ve always led a pretty disciplined life but I do enjoy a glass of wine. I run about five kilometres every Saturday morning and I guess I’ll keep on doing just that.”