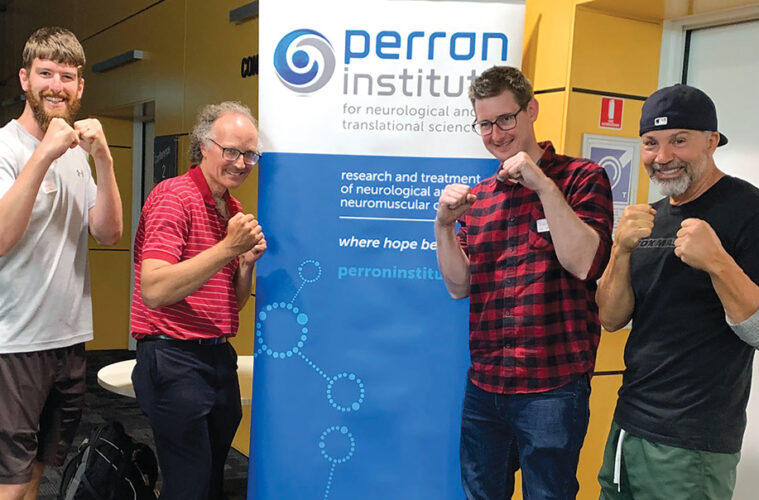 Boxing lending a hand to Parkinson’s

A high intensity exercise program using non-contact boxing for people with Parkinson’s disease has been developed by a team from the Perron Institute and Edith Cowan University.

With the help of professional fitness trainer Rai Fazio, the team has developed the FIGHT-PD program.

A feasibility study involving community volunteers has shown that non-contact boxing could be helpful and safe for people with early-stage PD.

The study was the first to use continual heart rate monitoring and ratified scales of exertion used by sports scientists. Training included balance and movement drills, high intensity aerobic bursts and sequences of punches using a Fightmaster training machine.

Clinical Professor David Blacker, Perron’s medical director and consultant neurologist, is the study leader and has a personal perspective as someone living with Parkinson’s disease. Exercise, he says, has significantly helped to reduce his symptoms.

“Boxing movements, footwork and balance are excellent for PD because the postures and movements required are almost the exact opposite of what occurs in this disease,” Professor Blacker said. Aboriginal health service South Coastal Babbingur Mia has appointed Dr Talila Milroy to its team – the first Aboriginal GP to work there and thought to be the first to work in the Rockingham and Kwinana district.

The Yindjibarndi and Palyku woman is passionate about Indigenous social justice, health care education and research.

About 3% of the Australian population, or just over 760,000 people, identify as Aboriginal or Torres Strait Islander – and Dr Milroy is one of only about 600 Indigenous doctors in Australia.

She was the only Indigenous medical graduate in her class of 2015 at the University of Sydney.

Many people are confused about what constitutes an emergency and when they need to call an ambulance or go to an ED, according to the results of Edith Cowan University.

Despite suggestions that people seek emergency help unnecessarily, the study found that many people downplayed potentially life-threatening situations and felt they did not warrant a triple-0 call or trip to the ED.

The research involved data from more than 5000 people who were asked to respond to a series of 17 medical scenarios. Researchers then quantified how often people were incorrect in recognising which scenarios warranted calling an ambulance or presenting at an ED.

Senior lecturer and researcher Dr Brennen Mills said that while people were advised against unnecessarily calling an ambulance or attending EDs, particularly given ongoing ambulance ramping issues and over-burdened hospitals, it was still important they sought emergency help when necessary.

“While most Australians are able to correctly identify symptoms associated with a number of medical emergencies, there are some conditions in which recognition of being a potential emergency is poor,” Dr Mills said.

Among the scenarios were a child suffering a scalp haematoma (67% incorrectly thought an emergency response was not needed); potential meningococcal infection (57%); box jellyfish sting (40%); paracetamol overdose (37%) and mild chest pain (26%).

Men were more likely not to seek emergency treatment when needed compared with women, and parents were no better than people without children at recognising the need for emergency care for head haematomas or potential meningococcal infection.

Australian doctors are more likely to be sued for medical negligence if they are unhappy, overworked, working in rural areas or unwell, according to research from the University of Melbourne.

Published in the British Medical Journal, the Australian-first study also found that doctors with an “agreeable” personality were less likely to be sued.

The findings were more pronounced for male doctors than female.

The research team led by Dr Owen Bradfield and Professor Matthew Spittal analysed responses of over 12,000 Australian doctors to the Medicine in Australia Balancing Employment and Life (MABEL) survey between 2013 and 2018.

Just over 5% of the doctors reported being named in a medical negligence claim during this period.

An international study of global progress in reaching World Health Organization goals in providing universal health care has found that many countries, including Australia, may be inflating their success by not counting people in prisons and youth detention in their data.

The review, led in Australia by Curtin University and the University of Melbourne, and published in The Lancet Public Health, analysed the way WHO collected global data and found that incarcerated people were currently excluded, despite the big concentration of health needs in custodial settings.

Lead Australian researcher Professor Stuart Kinner, from Curtin’s School of Population Health, said that particularly in countries with high incarceration rates, failure to include custodial settings in health care coverage calculations might not only result in overestimation of progress, but also mask important health inequalities.

“While Australia does have a ‘universal’ health insurance scheme – Medicare – in reality it’s not quite universal because it excludes some of the most marginalised and unwell people in our communities,” he said.

More than 5000 patients have presented to Hollywood Private Hospital’s emergency department in its first six months of operation.

The $67 million facility opened last November, becoming the second private ED in WA and the first north of the river.

Director of Medical Services Dr John Maxwell said the ED had been embraced by the community.

“People appreciate having a choice and are grateful to have the option of private emergency care,” he said.

The most common presentations to the ED have been chest pain, abdominal pain, shortness of breath and falls.

The ED is open to both private and public patients, who can either make their own way there or arrive by ambulance. Referrals are not needed but there is a $200 doctor’s consultation fee.

St John of God Subiaco also has plans to open an ED. 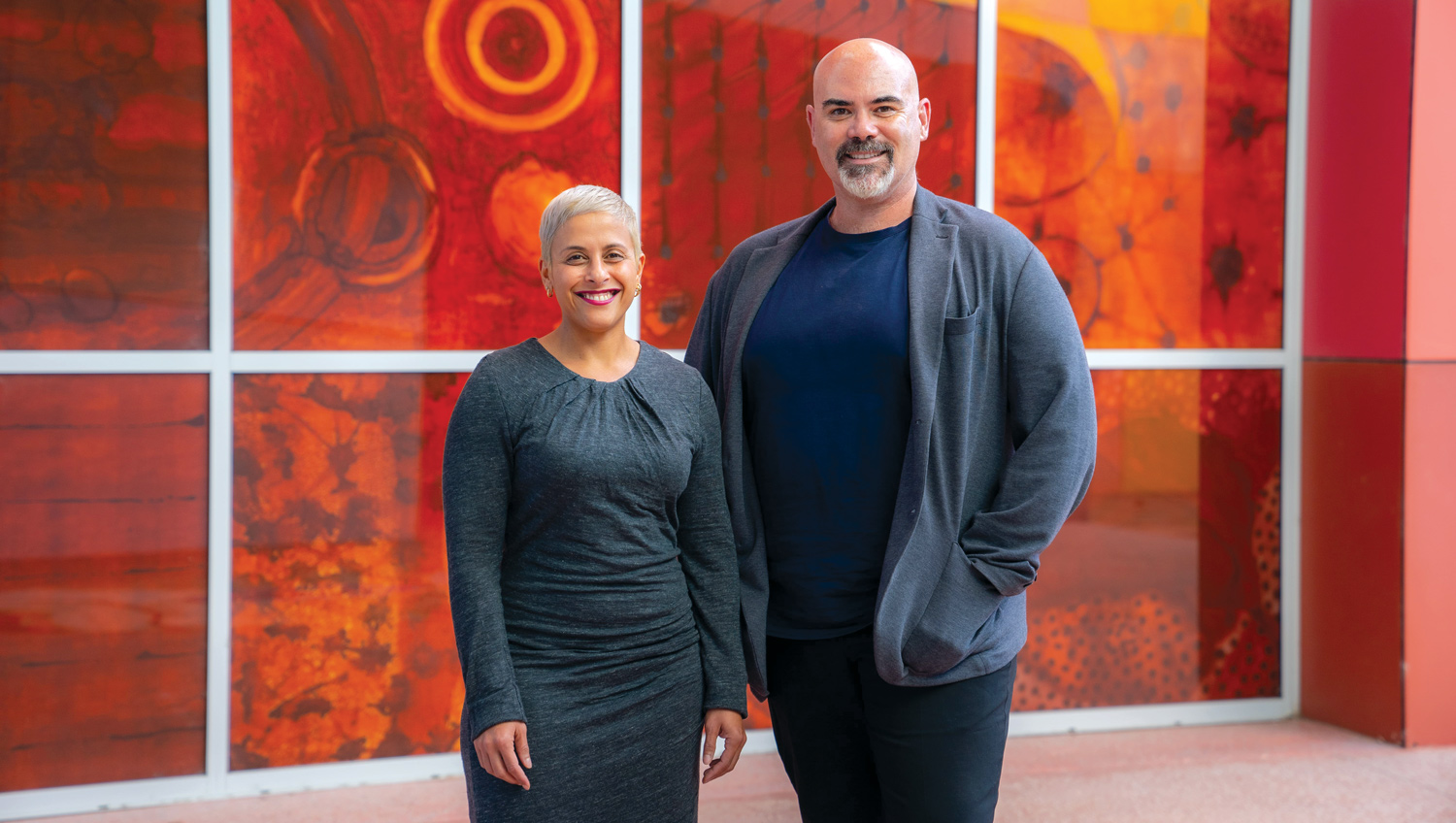 Edith Cowan University has been awarded a $3 million grant to introduce a 30-minute infant health check which could have a profound impact on the lives of Aboriginal children.

Researchers will use the National Health and Medical Research Centre grant over five years to implement the Care for Child Development program which the World Health Organization and UNICEF have used internationally.

It adds just 30 minutes to regular infant health checks and sees health providers trained to offer advice to parents and caregivers on how they can improve and foster their child’s cognitive learning and speech and language.

Almost one in three Aboriginal children start school in WA with at least two developmental vulnerabilities.

“The long-term effects of having poor early child development means children don’t live up to their potential,” he said. “That then influences their educational attainments and their social and emotional wellbeing going into adulthood.

“Despite this, there has been no primary health care development programs starting in the first four weeks of life.”

NPS MedicineWise has won a reprieve from the new Federal Government after it faced having its funding axed next year.

The previous government announced in its 2022 Budget that from January 1 NPS MedicineWise would no longer be funded by the Department of Health to deliver ‘quality use of medicines’ functions.

Instead, the Australian Commission on Safety and Quality in Health Care would take on this role, while education programs for health professionals and consumers would move to contestable funding.

The decision was criticised by doctor and consumer groups, who raised concerns about the implications for people’s health. NPS MedicineWise argued that since 1998 its work had delivered a $1.1 billion saving to the PBS and MBS by promoting more judicious use of medicines and tests.

In the lead-up to the Federal election, Labor pledged to review the decision if it won office.

The Harry Perkins Institute of Medical Research has received eight grants in the WA Research Excellence Awards 2022 program, some of which will fund research into hard-to-treat cancers and rare disease gene discoveries.The grants, worth $1.7 million, are part of the more than $10 million awarded to some of WA’s leading health and medical researchers.

“These funds will help us with our work in inducing clusters of immune cells inside some tumours,” she said. “We are one of only a few laboratories globally which have developed drugs to induce these immune clusters.

“This is a new and exciting area in modern medicine, and we hope to be able to put more resources into it and test more treatments that combine new therapeutics with immunotherapy.”

The Neurological Council of WA has welcomed the World Health Assembly’s decision to adopt a new Intersectoral Global Action Plan on epilepsy and other neurological disorders.

It is the first time that neurological disorders have been recognised as a distinct field by the WHO. Key features of the plan include the right to rehabilitation, the importance of brain health from birth to old age, reducing health inequalities, and an intersectoral approach to neurological disorders.

The plan is considered a major step toward improving access to care and treatment for people with neurological disorders, preventing new cases, and promoting brain health and development across the life course.

Watering your garden in your favourite gumboots might seem a far cry from a busy hospital theatre, but there is a close connection thanks to sustainability initiatives at Hollywood Private Hospital.

Staff are recycling masks, oxygen tubing and intravenous drip bags made from PVC to be turned into a wide variety of products, including gumboots sold at Bunnings.

Support services manager Jonathan Reynold said the recycling campaign started 18 months ago and PVC hospital waste was sent to a facility in Victoria, where it was processed and sold as recycled PVC resin to manufacturers to make products such as garden hoses and playmats. So far about 275kg of plastic bags has been diverted from landfill.

Other sustainability initiatives at the hospital are battery recycling, reusable fabric hair nets, environmentally friendly catering equipment, compostable medication bags and reducing the use of anaesthetic gas desflurane by switching to sevoflurane, which is not as harmful to the environment.

In another positive move, the WA Health Department has signed up to the Pacific arm of the Global Green and Healthy Hospitals network, joining health departments in Victoria, Queensland and the ACT.

Seven out of 10 pregnant women were cured of their multidrug-resistant tuberculosis and delivered healthy babies after taking a medication that had previously been considered unsafe in pregnancy, a new Curtin and Telethon Kids Institute study has found.

Published in JAMA Network Open, the study looked at the experiences of 275 pregnant women with multidrug-resistant TB living in South Africa, Peru, Brazil, Iran and Uganda.

“This is the first comprehensive review of treatment outcomes for multidrug-resistant tuberculosis in pregnant women, who remain one of the most vulnerable groups among the half a million people living with the disease globally,” Dr Alene said.

“As many as 73.2% of pregnant women with multidrug-resistant TB gave birth to healthy babies and that the treatment had worked for 72.5% of the women, meaning they were cured from the disease or had completed the treatment successfully.”