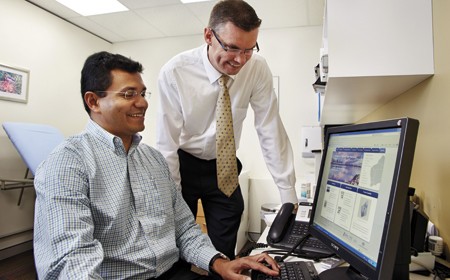 Passion for People and General Practice When you speak to Cloverdale GP Dr Tim Chappell, it doesn’t take long to realise he has a genuine affection for his patients. In conversation he describes them as “tremendous”, “fascinating” and “riveting” and you get the sense that along with their medical history, he could also give you their entire life story.

It is this affection for people which saw him make a last-minute switch from the specialist pathway to general practice.

After unexpectedly finding himself accepted onto a general physician training program, the idea unsettled him.

“I would wake everyday thinking, ‘what is wrong with the world? The sun is out, it’s beautiful outside, the coffee is on…oh that’s right, I’m on the general physician training program. I have to get off that’,” he said.

“A physician once said to me: ‘We want serious people, we don’t Dr Tim Chappell. “I want my students to succeed; I want them to start up their own practices”

want people ending up as poets after all this training’. Not that I’m not serious, but one of the troubles with specialty work is that it doesn’t leave much time for development of any other part of the person you are.”

Patient-centred care
Despite hearing a “truckload of negative information” about general practice, he realised he was a natural GP.

“I love listening to people’s stories and find the relationship with the patient the most rewarding thing. I saw that general physicianship wasn’t going to give me that and general practice was.”

It isn’t just his patients he has a passion for. Since he was a resident at Royal Perth Hospital he has put his hand up to teach and mentor younger doctors.

For him, part of the joy of teaching is seeing “the penny drop”.

“I enjoy seeing people learn more and gain confidence. Registrars and medical students also give back to us. We learn from them – they keep us on our toes and are always introducing new things.”

“I do put energy into teaching. There are teaching sessions every Tuesday morning at 8am and I supply the coffee. I try to address the blanks, talk about the issues. I make sure there is formal time – you can’t do it at lunch time.”

“I want my students to succeed; I want them to start up their own practices.”

Teaching is vital
More than just filling in the blanks, Tim also tries to instil the three Cs – competency, compassion and communication – into those he teaches. If a doctor is failing, he says, it is usually in one of those three areas. His teaching experience goes beyond his practice doors. He regularly lectures for WAGPET, has been a guest lecturer at Notre Dame University and UWA, and has taught a medical course to occupational therapists
His dedication to the next generation of doctors surely had a part to play in Fulham Medical Centre being named the 2013 WA General Practice Education and Training Practice of the Year.

He has high hopes for the next generation.

The future of general practice is in the hands of some “outstanding doctors” who are driven, engaged and far less cynical than their predecessors.

A change in how hospital doctors regard GPs is also creating more excitement about the field.

“Emergency departments see a lot of bad general practice, just from the nature of the beast. Either the patient isn’t helped or they are sent in inappropriately or something hasn’t worked. In hospitals you don’t get to see the positive side of general practice,” he said.

Time to value GPs
The gradual shift away from bulk billing is another reason to be excited. Like many GPs, Tim believes the system grossly devalues general practice.

“When people get to the point where they can’t charge $5, you just think wow, they are valuing their professional opinion at less than a cup of coffee. Now that is slowly being disintegrated, I think we will see improvements for general practice. Patient expectations change when they pay. Patients expect more, much more, and they listen.”

However, he warns aspiring GPs about the challenges of paperwork and policy and the damaging effects it can have on individuals and the profession at large.

“A lot of the paper work belies – underneath it – a lack of trust. That the doctor is not going to do the job. It just creates less focus on the job at hand. I think it is a danger – it becomes so regulated that a doctor is unable to practise good medicine because there is so much other stuff to do.”

Tim has been at the Fulham Medical Centre in Cloverdale for 15 years, the past six years as one of the practice partners. Prior to this he spent three years as a GP in the Pilbara port town of Dampier.

Community medicine
In a small town, knowing everyone becomes inevitable which, for Dr Chappell was the best (and sometimes the worst) part of the job. He recalls a time when he knew everyone in the shopping centre, including the tourists.

“I had one of the women at the checkout say to me, ‘How was your holiday Dr Chappell?’ I thought to myself, I don’t recall telling you I was going on holiday,” he said.

When he isn’t teaching or attending to patients, Tim indulges his other love – writing. He already has one book to his name, and is now finalising his second – a book for young adults.

The subject is close to home about quokkas escaping from Rottnest Island. Tim describes it as an epic adventure and a “cross between Watership Down and The Lion, The Witch and the Wardrobe”.