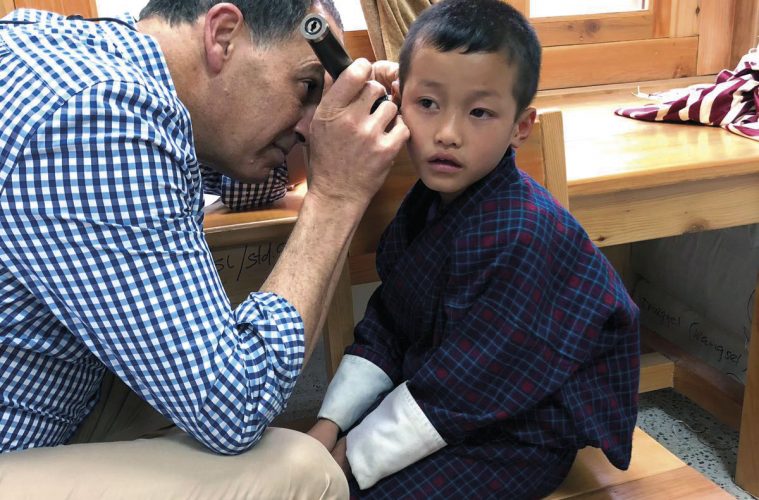 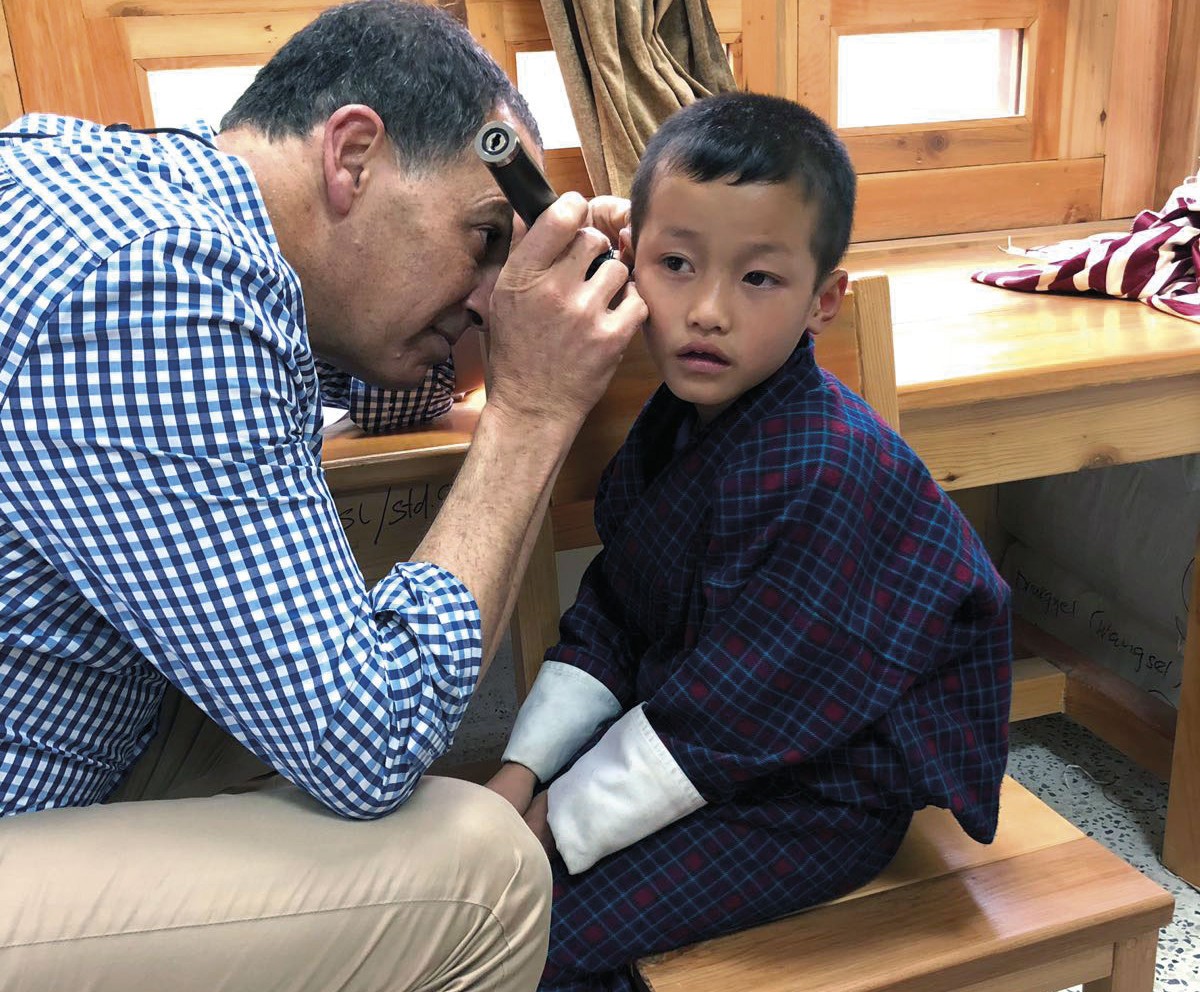 Professor Peter Friedland examining a Bhutanese boy, whilst volunteering with his charity Hear Hear for Bhutan.

When Peter Friedland phoned his family to say they might not see him again, he was deadly serious, In the end, it was the violence of South Africa that lead him to migrate to Perth.

Professor Peter Friedland, resisted compulsory conscription into the South African Army and at the age of 29 years old, the Military Police offered him one year’s service in the military instead of serving 3 years under arrest. On a Friday afternoon at 4.00 pm October 1990, a few months after Mr. Nelson Mandela had been released, Peter Friedland was summoned by the most senior Commanding Officer.

“I presented in my formal officer’s uniform, absolutely terrified that I was going to be Court Martialled. Why else do you get summonsed at 4.00 pm on a Friday afternoon when you are an insignificant Lieutenant in the Medical Corps?

“I was told that there was going to be an assassination that night, Mr. Mandela was going to be with President De Klerk at the national press club for a newspaper person of the year award.

‘You are to set up two resuscitation stations at the event in two hours’ time.,” he said

“That was the first time I met Mr. Mandela,” Peter told the Medical Forum.

“I just remembered how tall and dignified he was, he towered above me, with the most beautiful smile and warm hands.” 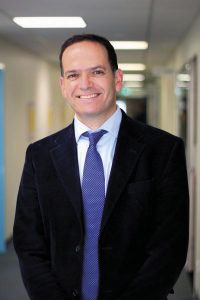 It is not surprising that Nelson Mandela came to recognise in Peter some of the compassion that he himself possessed in great measure. “My late father was a big influence in my life, he was an engineer, and he became ill at a very young age. He was poorly treated by the medical profession, partly because he didn’t have a lot of money and partly because of the arrogance of doctors in the 60s and 70s.”

“Although they were competent, they lacked empathy and caring and compassion. I decided that the medicine I would practice and teach would respect the dignity of every human being, irrespective of their station in life, and their colour, race or creed and whether they could afford health care or could not. Whilst I may not agree with people and their beliefs and what they do with their lives I can always respect the dignity of their narrative and who they are. That dignity is their birthright.”

The supportive part of medicine, the doctor drug, remains key, according to Peter. “Many cancers and chronic diseases are incurable, and doctors often revert to what they have been doing for 2,000 years, giving the patient time and attention and listening to their story. Respecting their dignity and giving them the time of day, even if only a few minutes, being present with them, that is the true healing and supportive part of medicine that will continue for the next 2,000 years regardless of the technological advances.”

Peter practises what he preaches, helping a school of deaf children in South Africa as his ENT career evolved. “Sixty of them were HIV orphans, looked after by their brothers and sisters who were a mere 12 or 13 years old. The only square meal that got every day was the meal we provided for this school. For 330 pupils, we only had 9 or 10 teachers.”

“At the start we did not have an audiologist to test the children’s hearing and they would sign language. I was very fortunate to come into contact with a very devout Christian individual who ran a hearing aid company in the states. It’s a long story, but he promised me hearing aids for all these children. We managed to fit hearing aids to some of the children who were moderately deaf and not profoundly deaf, and they could hear for the very first time.”

One of the greatest human beings

It was his fateful connection to Mr Mandela that drew Peter further into his ENT interests. “I never knew exactly why I entered ENT, until I met Mr. Mandela and had the opportunity to treat him. If I was in ENT just to look after this man, then that’s enough for me. It was a privilege to be in the presence of one of the greatest human beings. He was unique in the sense that he lived his talk. We can all talk about going to jail and living 27 years in a tiny concrete cell, but to do it and live 23 years after jail and practice the forgiveness and non-judgement that he preached is incredible.”

“I realised that he had a significant hearing loss and his hearing aid was not working. I was working in the same hospital as his physician and I mentioned to him one day that Madiba couldn’t understand what people were saying to him.”

“Madiba” was how those close to Mr Mandela addressed him, deeper than a surname it is used as a sign of respect and affection.

“One Sunday afternoon I get a phone call to say that Madiba had flown back from Mozambique. Would I be prepared to come to his house and see him? This was the moment I dreamed of all my life.”

“I realised he had been wearing analogue hearing aids, which were 30 or 40-year-old technology and made by a company which sent them to him when was he was still in Robben Island in the 1960s. He lost his hearing because he had performed forced labour daily in the limestone quarry. The noises from hitting the stone destroyed his hearing, just as the sunlight destroyed his eyes.”

Peter convinced Mr Mandela to wear digital, top of the range hearing aids. They worked. He could hear and understand. “But his swollen arthritic fingers from all the years of the stone quarry could not remove the aids or adjust them. I realised how stupid I had been. What’s the use of putting the finest technology in the ear when the person can’t take them out? I took them away and replaced them attached to big visible moulds. He wasn’t worried about what they looked like. I was worried for him. He had no vanity and couldn’t care less, he was only too happy with them.”

The move to Perth

Mr Mandela did not want Peter to move to Perth, but his exposure to the victims of violence became overwhelming.

“I unfortunately operated on over 350 people who had been shot in the head and neck. Three of my closest friends were shot dead, in my presence. The last friend was shot and killed in front of me while we were waiting for our children to come off the soccer field. I was holding him and saying a few prayers while the police took the forensics. I made a commitment that within a year I would be out of South Africa and elsewhere.”

Peter was 46. His friend was killed on the 28th January 2008 and he started in Perth at Sir Charles Gairdner Hospital one year to the day on the 27th January, 2009. Three years later he was appointed head of department.

Peter is a gifted educator, committed to teaching and training medical students at UWA and Notre Dame Universities and to training and mentoring ENT surgical trainees. In his ten years in Australia, he was won nine teaching awards. This is combined with his active research in Otology and Head and Neck Cancer at Sir Charles Gairdner Hospital.

Mr Mandela gave Peter his blessing to leave, with one proviso. He should work for the good health of the indigenous people. Whether it was in Africa or Australia, didn’t matter

“I am involved in rural outreach in the Kimberley’s and Pilbara and would like to help lower the high rates of incarceration of indigenous juveniles in prison. Over 80% of them have hearing loss. I believe that if we can rehabilitate their hearing, we can decrease recidivism. The one-year recidivism rate is over 50%. So, whilst we talk about too many people in our prisons and not enough space, what are we doing to genuinely rehabilitate people so they do not return to prisons? What are we doing for the individuals who can’t hear the judge or the prison warder and end up classed as disobedient?”

Peter also started a charitable foundation with colleagues, Hear Hear for Bhutan, that helps children in Bhutan with hearing loss. “We visited a school of 110 to find none had been assessed by an ENT. I took an audiologist with me. We assessed and examined all of them and fixed those, who had never heard in their lives, with hearing aids.”

“What I love about Bhutan is that it has a happiness index, not a GNP. They are the happiest people in the world on an average wage of sixty to ninety dollars a month. My colleagues took along plain lead pencils that cost 20 cents to give each child. We handed them out and one concerned six-year-old child came to me with a sign language interpreter.’ Did I not give you a pencil?’ I asked. She pulled out four pencils and she put three on the table and said ‘you gave me three too many’ ‘Don’t worry you can keep them,’ I said. ‘No, it’s not fair, each of us only got one pencil and I only need one.’