If you haven’t been to Perth’s favourite island playground for a while, Cathy O’Leary suggests you get reacquainted.

Rottnest Island has always polarised West Australians – they either love it and are prepared to ignore its shortcomings, or they dismiss it as overrated and overpriced.

I’m firmly in the first camp, although I understand grizzles about the price tag, primarily the cost of accommodation but compounded by the ferry fare and the compulsory government entrance fee.

And in the past, criticism of the charges for accommodation that was barely two-star were fair.

I remember staying in so-called premium units at Thomson Bay or the Geordie Bay-Longreach outposts many years ago, when the first thing that needed to be purchased from the shamelessly expensive and under-stocked grocery store was cockroach and mouse bait.

Second item on the shopping list was the awful soap and shampoo needed to garner even a hint of lather in the delightful salt water showers.

Oh, did I mention the one-hour ferry trip over from the mainland, before the advent of fast boats and ocean stabilisers, when some people (read: me) spent the better part of the journey with their head in a toilet bowl suffering sea sickness?

Once safely ensconced in a unit with the vermin bait in place next to the oven too dirty to use, the holiday-maker’s bedding consisted of uncomfortable mattresses with crinkly plastic coverings and thin, scratchy army blankets which reeked of who-knows-what.

Fast-forward to 2021, and while Rottnest still has all its charms, thankfully there are more accommodation options which, while not cheap, seem better value. 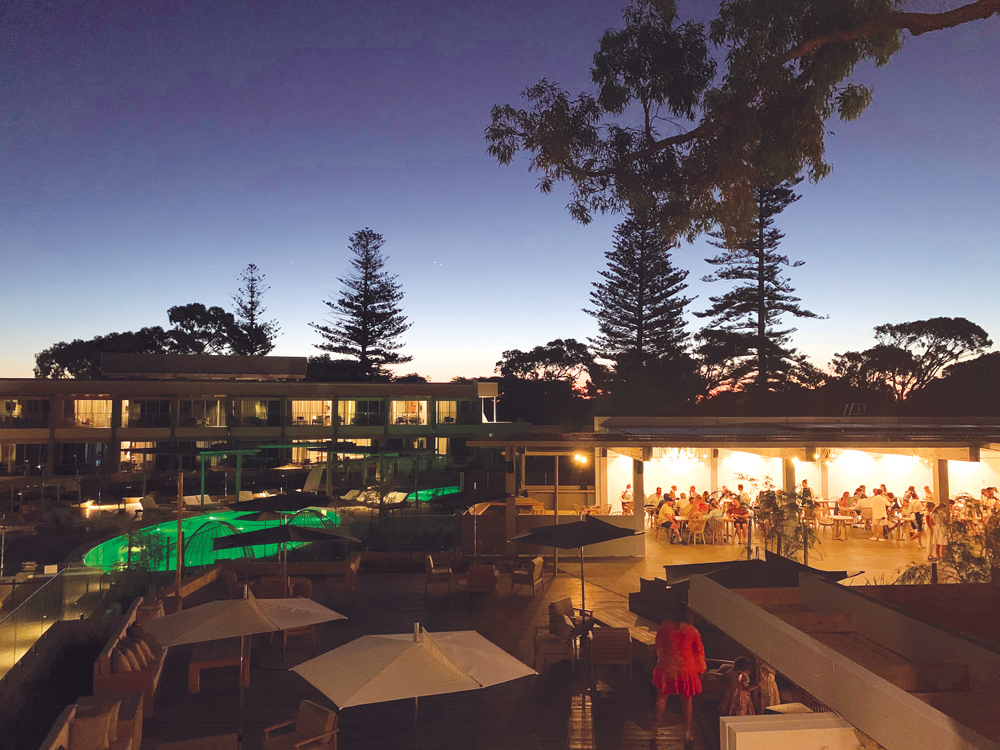 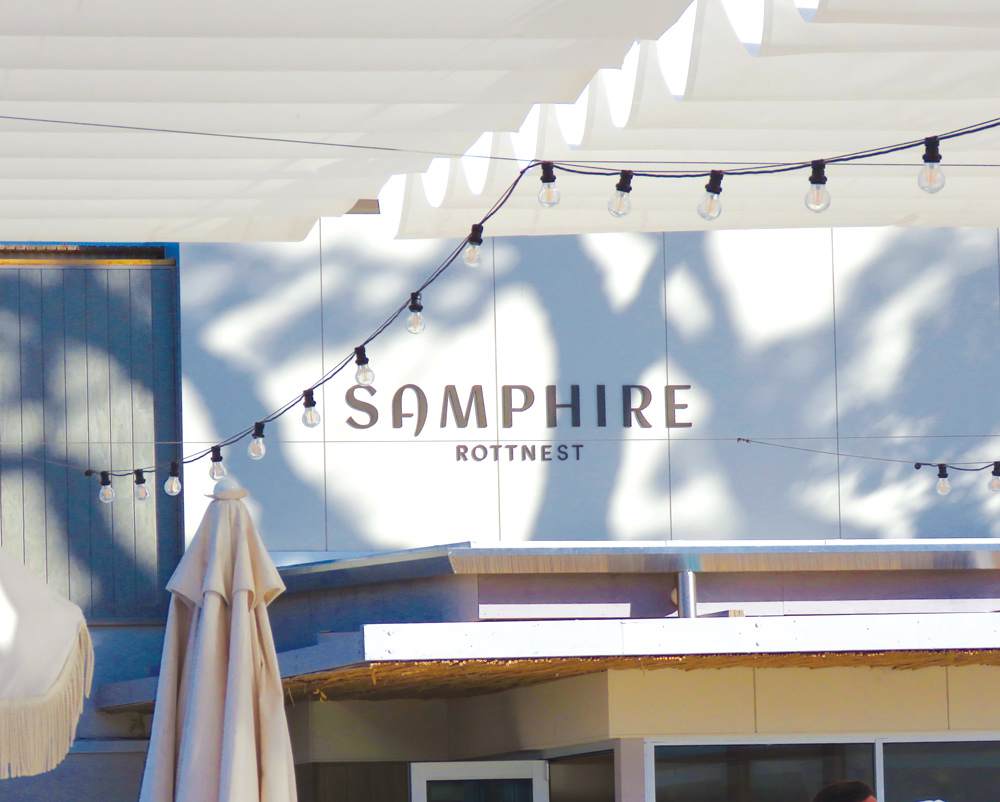 Ferry fares are more affordable and provide more incentives for day-trippers, with day returns of $49 in summer, including the island fee, or as low as $35 for people happy to catch an afternoon ferry and return home by 10pm.

Accommodation consists of units managed through the Rottnest Island Authority, with dozens of them stretching across the eastern and northern side of the island, from Kingstown Barracks across south (nappy alley) and north Thomson Bay, and then to Longreach and Geordie bays.

Many are self-contained, while others are basic camping-style cabins, and the price varies considerably depending on the view and the season.

These two newish establishments are expensive, particularly with dynamic pricing which can see the prices sky-rocket on weekends and peak holiday period.

My experience at Samphire and its restaurant Lontara was only positive – I tried to book another weekend online as soon as I left on the ferry back to Fremantle – but others have found it hit-and-miss. I suspect it opened too early, before it had all its ducks in a row, and has been playing catch-up ever since.

And while the premium tents at Pinky’s are literally only a few steps to the beach, the tariff can be eye-wateringly expensive.

During my recent stay in one of Samphire’s beachfront units – its best accommodation type and one of the most ‘beach chic’ rooms I have ever stayed in – the daily tariff was actually less than the rate for the best tent at Pinky’s so go figure that!

Despite the luxe options, for most people staying in self-contained units with family and friends remains the quintessential Rottnest experience, and the ambience has vastly improved over the years. As such, they remain in hot demand, and securing one over Easter or the January school holidays is akin to winning lotto.

In another major improvement to the island, there is no need to haul over groceries from the mainland like we did in the olden days. The general store is now a fully-fledged gourmet supermarket as good as anything you will find in Perth, with anything from grain-fed beef to French brie and quince paste – and no sign of the dreaded salt water soap.

But a holiday at Rottnest is not all about staying in at your digs – it’s about getting out and seeing the island.

A lot of work has gone into making the 11km long island more accessible, with a great network of clearly-marked walk trails developed, no doubt as a result of the surging popularity in group hikes in Perth.

Another game-changer for people who have struggled in the past to see a lot of the island on bike because of the daunting killer hills (pick me) has been the inclusion of electric bikes at the bike hire shop.

Again, not that cheap at $60 for a 24-hour period, but e-bikes open up the whole island, allowing visitors to get around it all in one day, even with plenty of stops along the way.

On my circuit I enjoyed a refreshing dip at Little Salmon Bay, had a decent barista coffee overlooking the view from the inland Wadjemup Lighthouse, and visited the impressive West End with its boardwalk and seal viewing platform.

From there it was off to Ricey Beach, the stunning Little Parakeet Bay (another swim stop) and then through Geordie and Longreach bays before arriving back in Thomson Bay in time for the obligatory pie and cream bun at the bakery.

The next day we were a tad saddle-sore, even with the assistance of the electric powered bikes, and decided we would opt for a less adventurous day back at some of the quieter beaches we visited on the previous day, and go by bus.

But in the end, it was better sense to pay the $40 second-day hire rate for our e-bikes rather than the $20 daily bus ticket.

Another issue that has long complicated the relationship many visitors have with Rottnest is its past, specifically the disturbing incarceration of Aboriginal prisoners in the 1800s.

There is no way to gloss over this dark period in time, but there are now efforts to acknowledge this history, warts and all, and recognise the Whadjuk people as the traditional custodians of Wadjemup (Rottnest Island). 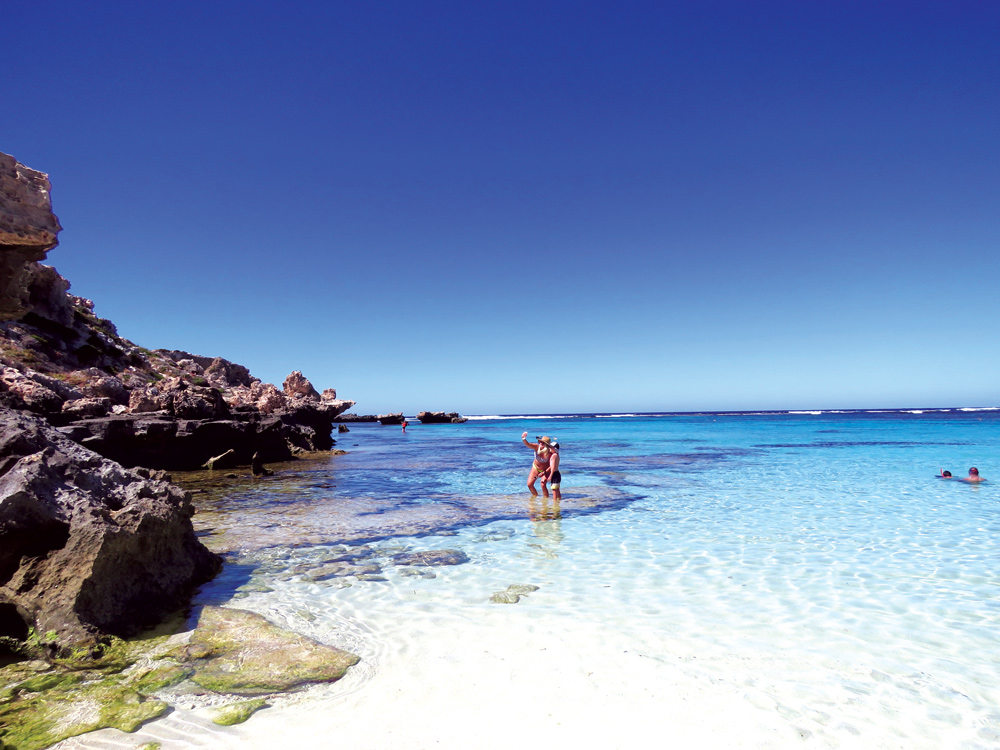 A project is underway to properly recognise the Quod and the Burial Ground, as well as other sites connected to the Aboriginal prison era, and determine a future use for them in consultation with the WA Aboriginal community.

It is wonderful to see Aboriginal names pop up everywhere as you traverse the Island’s unique landscapes along the Wadjemup Bidi – a series of walk trails that take you across spectacular coastal headlands, past stunning inland lakes and natural and man-made attractions along the way.

“Bidi” means trail or track in Noongar, the language of the Whadjuk people. The trail is 45 kilometres in its entirety and made up of five sections, each boasting significant landmarks to interpret and experience, connecting Rottnest’s beautiful natural features to its cultural history.

A popular walk trail is the 9.7km Gabbi Karniny Bidi trail in the north, which starts from the Thomson Bay settlement and heads west out of Digby Drive, meandering through the lake systems including a magical stroll along the Lakes Boardwalk which provides the impression of walking on water.

Equally impressive and worth the leg-work is the 7.6km Ngank Wen Bidi on the western end of the Island which is a marine wildlife haven. New Zealand fur seals can be seen from the viewing platform at Cathedral Rocks and the West End boardwalk is a great place to spot dolphins and the seasonal migration of humpback whales.

The loop circumnavigates the entire West End, guiding you along one of the most remote trails on the Island. The views from the south coast span back to the mainland and all the way to Garden Island.

If longer walks seem too much like hard work while on holiday, the Rottnest Voluntary Guides Association offers shorter guided walking tours each day, leaving from the Salt Store located between the Dome café and the main settlement shopping mall.

It sounds trite but there really is something for everyone at Rottnest, whether you want to walk, cycle and swim your heart out, or just sit around and read a book while smugly gazing at the mainland haze.

Of course, no visit is complete without quokkas and it is good to see visitors largely adhering to the prominent message boards advising not to feed or touch the wildlife, however cute they look.

Still, quokkas can’t read signs, so there is nothing to stop the occasional one from slipping in quietly under a bench table at the pub to snaffle up the odd discarded crust of margarita pizza. A photo of that and you can tick all the boxes of the perfect holiday.

ED: For more details on accommodation, ferries and things to do, go to www.rottnestisland.com. For free guides tours go to www.rvga.asn.au