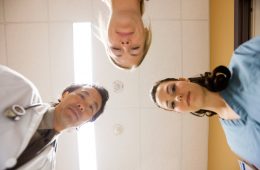 WA biotech company Resonance Health (ASX: RHT) has finally moved into the black with its image analysis technology, primarily in the form of FerriScan® quantitative MRI image analysis, developed to assess the degree of liver iron overload in haemochromatosis. Since 2005-06 (when the company underwent a share consolidation and major belt tightening), revenues from FerriScan have increased from $0.3m to $2.3m and during 2008-09 the company reported its first profit of $617k. The company is looking to apply its technology to the diagnosis of liver fibrosis (as an alternative to liver biopsy) in a broader range of liver diseases and to a much wider market, all by 2012. The inability of the test to make it onto the MBS Schedule has been a major revenue block but regulatory approval by the FDA and other European agencies has seen these markets begin to open. Lisa Dunne, Managing Director since 2003, has been a driving force along with Perth Radiological Clinic's Dr Martin Blake, UWA scientist Prof Timothy St Pierre, board chairman and biotech investor Dr Stewart Washer and major shareholder Mr Simon Panton.

Medical ForumMay 1, 2009
HBF changes cosmetic only You may have heard the rumour that from July 1, HBF will no longer pay benefits for hospital treatment that is not eligible f... Read More...
WA News3 min read

In early October, federal Health Minister Nicola Roxon promised to crack down on medicos who failed to tell patients about gap fees but the Private Health Insurance Ombudsman has found the number of complaints about gap fees for hospital treatment is small. The Ombudsman received 2,385 complaints in the 12 months to June 2008, which was 45 (1.9%) more than the previous year. Most complaints were about health insurers (2267), followed by hospitals (133) and practitioners (56). Policy holders with Medibank Private (which has 28.6% market share), made 22% of the complaints. MBF Australia (15.9% market share) policy holders made 28.4% of the complaints and HBF (7.6% market share) made 2.1% of complaints.