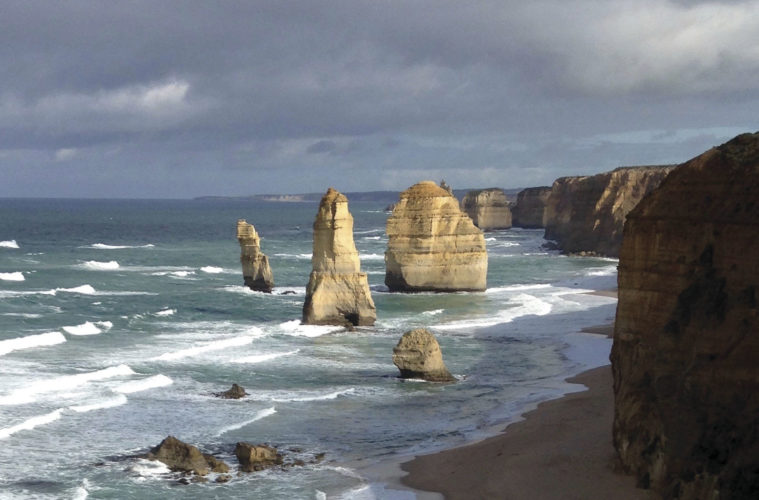 Everyone knows of Victoria’s Great Ocean Road, which starts in Apollo Bay and ends at the inspiring Twelve Apostles. Keen hikers are aware that the Great Ocean Walk, or the GOW, is a one-way 104km walk trail that hugs the rugged, rocky coastline, crosses deserted beaches and traverses through varying forest and heath ecosystems, including the Great Otway and Port Campbell National Parks.

You can certainly carry your own tents and food, and sleep in the great outdoors, you can also, ahem, go in comfort in small organised walking tours.

It was my option and the cares of a wind-swept walk or clambering over slippery and steep muddy tracks become fun talking points when there is a hot shower, a comfy bed and a delicious cooked dinner, plus pre dinner nibbles, waiting at the end of the day.

All that was necessary to carry with a light daypack with lunch, water, some extra clothes and my binoculars. Pure back-country hiking bliss.

Our operator was Inspiration Outdoors, which is Perth-based outfit, but with an operations office in Melbourne, where my trip started along with 11 other walkers. We were picked up by our wonderful guides, Cam and Rita for the four-hour drive to Apollo Bay, so we had lots of time for getting acquainted and hearing about the history of the area. 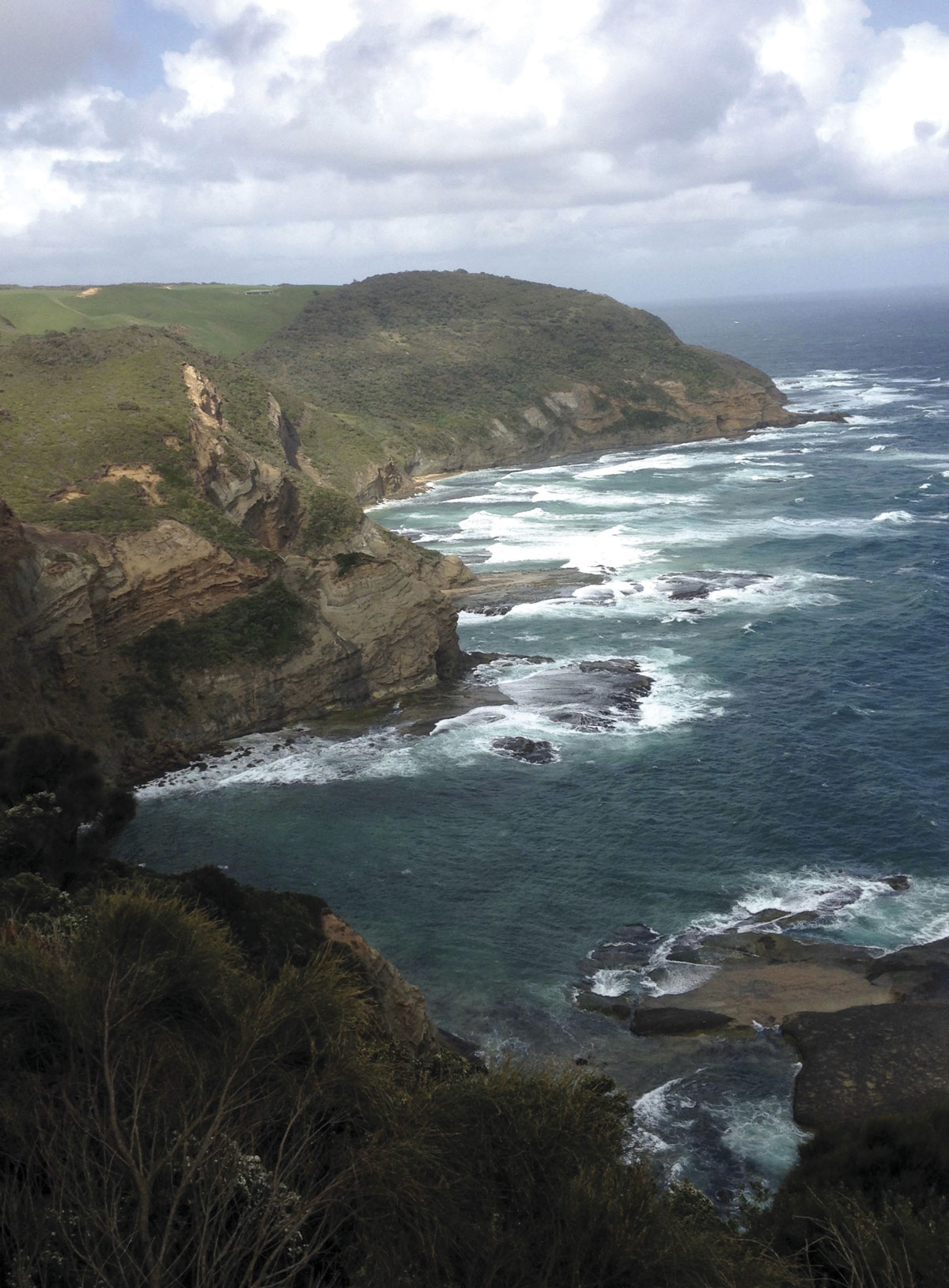 History of the track

Servicemen returning after World War I built the Great Ocean Road. There is a commemorative statue by the entrance gate. This area has experienced some horrific fires in the past several decades so this present gate has been completely rebuilt.

It is a lovely 8km hike on the first day, from Apollo Bay to Shelley Beach. The day was sunny, the coffee wonderful and everyone keen to start.

The trip involved walks from 8-21km a day. We were picked up at the end of each day and dropped off at the same spot the next morning, thereby being able to walk the entire track.

The highlights for me included seeing many koalas in the wild. They only eat manna leaves and tend to strip the trees bare. They were plentiful along the hike to the Cape Otway Lighthouse. Occasionally a loud grunt/roar broke the air: a male koala was making his presence known. While often the animals were sleeping in the crux of branches, we caught some great views of them climbing and feeding.

Before the lighthouse was built in 1848, this rocky coastline claimed over 600 ships, taking lives and cargo. The lighthouse sits atop 90m-high cliffs where Bass Strait and the Southern Ocean collide. The ocean below the lighthouse churns and it is easy to imagine the joy of immigrants, long at sea, finally sighting land, and then their cries of terror as their ship founders on the reefs and rocks. The view from the lighthouse is wonderful.

A Devonshire morning tea served by Rita in a koala suit added levity to our visit, and valuable calories for the afternoon’s walk, through sand dunes, coastal scrubland and calcified coastal cliffs. 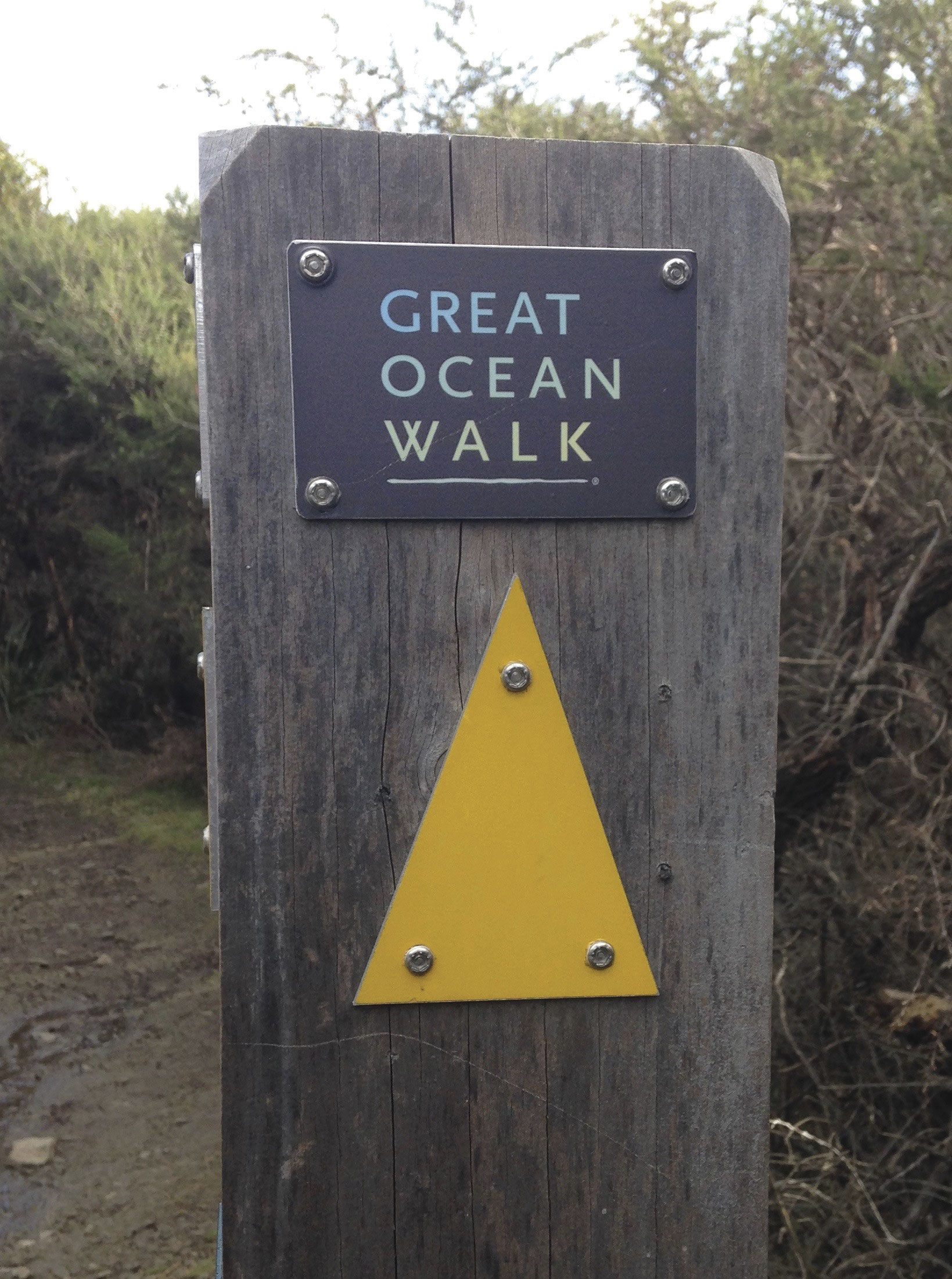 The next few days saw us tackling ups and downs along the coastline, with rewards of magnificent views. The group spread out, with everyone walking at a comfortable pace. The sound of the wind in the trees and the distant waves crashing on the rocks, the smell of water and clean fresh air, the steady tromp of boots on the track: what wonderful days.

In addition to enjoying the magnificent scenery, there was abundant opportunity for wildlife spotting. Along the walk there were firetail finches, especially by Johanna’s beach; splendid blue wrens nearly everywhere; a few elusive black wallabies; and lots of gorgeous native flowers.

The end of the walk took us to wonderful lookouts towards the striking limestone stacks that are the Twelve Apostles, which, of course, have dwindled to eight from the constant erosion of pounding seas. No matter, they were still magnificent.

When our party reached it was late afternoon and the darkening light muted their many shades of reds and orange. More shocking are the hordes of day visitors who take the long bus journey from Melbourne to the Apostles and back. After our blissful walk, the crowd was a shock.

When we return early the next morning, walking the short track from Gibson’s Steps to the Apostles lookouts, we have the wondrous views mostly to ourselves. 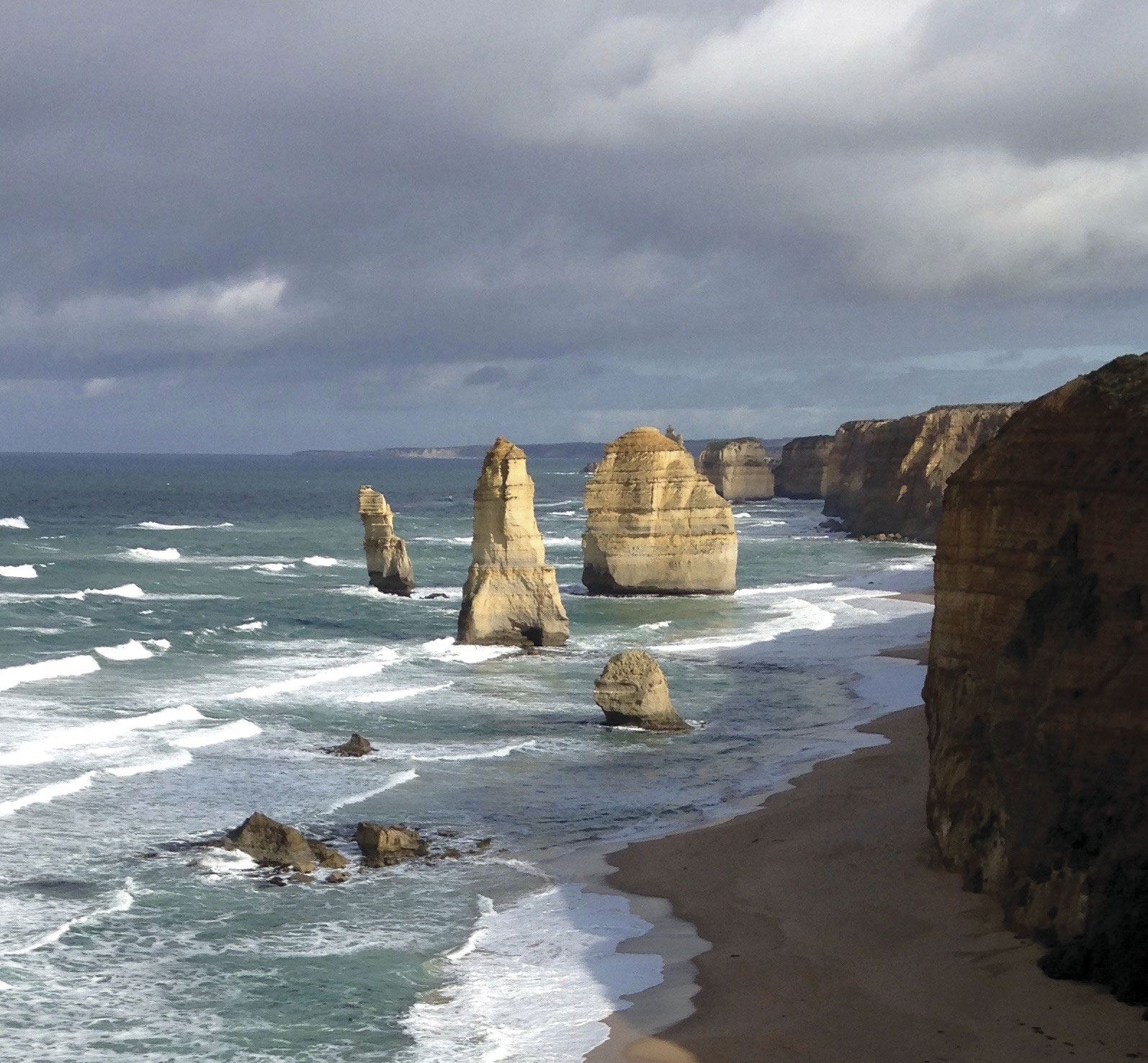 The steps are named after Hugh Gibson who ran a nearby homestead. It is thought that the 86 steps were carved by the local Kirrae Whurrong people and later used by many fisherman and sailors to reach the ocean. In the morning light the Apostles look fresh and bright.

We then had the great fun of a short helicopter ride over the coastline around the Apostles.  There are other limestone pillars and islands along the sea line, all given names that are suggested by their shape and, I reckon, someone’s active imagination.

Seeing the coastline from the air gave an understanding of how long and beautiful it is. It also made it possible to realise the difficulties of rescuing a boatload of people who could not swim, while those wooden ships were being smashed into the sharp reef and rocks in a height of a Southern Ocean gale.

Not surprisingly, many of the beaches we visited along the GOW were named after shipwrecks – the Lock Ard Gorge is one of the best known. Many relics from that 1878 wreck are part of an excellent and informative display at the Port Campbell visitor centre. The small town is very picturesque and blessed with great eateries and coffee, so it is worth making a lunch stop and having an amble before getting back on the minibus and taking the inland route back to Melbourne.

It was a great week of wilderness hiking made easy with organised transport, delicious meals and some end-of-the-day creature comforts.

ED: Inspiration Outdoors was the tour provider on this occasion. www.inspirationoutdoors.com.au