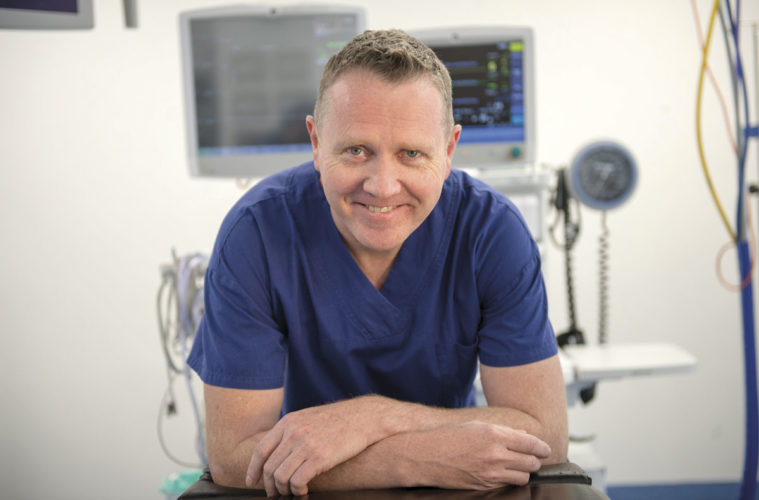 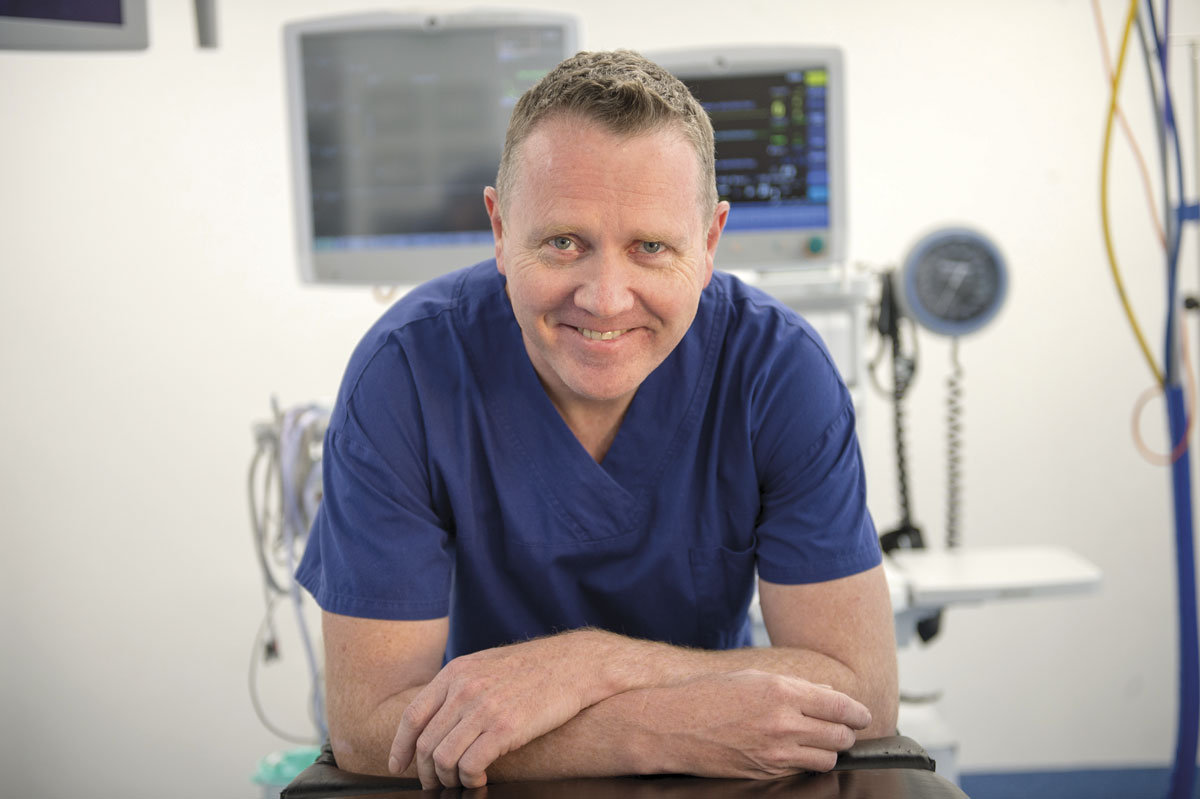 Dr Andrew Miller, President of the AMA WA, shares his thoughts on the challenges and triumphs of his organisation and the state health system.

Medical Forum: Reflecting on the year just past, what have been the highlights for Dr Andrew Miller – both professionally and personally?

Dr Andrew Miller: 2019 held some of my best and worst days. The arrival of our daughter Ava, in late 2018, has brought wonder and renewal, as only a baby can do. There is nothing like a fresh new person to motivate us to improve the world that she, and her adoring older siblings, will inherit. She won’t remember though, that in her first few months she spent some short but wonderful time with my closest friend, fellow anaesthetist Andrew Olney, just before he died from renal cell carcinoma. How valuable he was. Such huge a loss can only be digested over a very long time, if at all. I can’t get his voice out of my head. though, so I still have his disrespectful advice on hand. My son graduated high school late in the year, deploying what could only be called an extremely healthy work-life balance, and my elder daughter continues to inspire with her adventurous approach to study and life.

Being elected to the AMA WA Presidency ­was a great honour. I have high hopes for what the organisation can become, and what doctors can do, when our collective intellect is coordinated. I am so proud of this profession, when it is at its best, and I relish the opportunity to change things for the better and to point out all the good medicine has done and can do. Science must win out over whatever it is that is going on now with democracies and online information.

MF: What were the most significant issues you had to face as AMA WA President in 2019?

AM: The big-ticket items were:

Under-funding and bureaucracy, lack of training applicants, pharmacy nonsense, pathology rent issues. WAPHA leading on the Urgent Care pilot was a plus here, and WAGPET leading on Rural Generalist pathways.

– voluntary assisted dying, palliative care, and the whole of end of life.

Obesity, vaping, with chronic outbreaks of smoking, alcohol and gambling industry push back.

Getting the balance between public policy and personal responsibility right.

– internal renewal of the AMA WA to set it up for the next generations.

MF: How did you and the organisation approach them?

AM: I have refined my view of how the AMA can move forward after being on the state and federal Councils for some years, observing and learning from doctors whom I admire. I took time to see what works and what doesn’t. We need a laser-like focus on what doctors and their patients need from the AMA to make our lives easier and outcomes better. In 2017 I started a process of renewal at AMA WA and we changed the constitution then to have a professional board, modern governance, and to start a professional seamless transition to our new CEO. That has now been successfully delivered.

In advocacy, actively soliciting opinions of members and all doctors is the most effective way to represent the profession. Seeking and listening to the various opinions is vital to staying sensible. Though doctors take issue with some decisions, and that is inevitable, they do seem to appreciate the opportunity to be heard and treated with respect.

MF: Do you measure the outcomes in terms of success, or in a more multi-dimensional way?

AM: Outcomes are always multi-dimensional as the question suggests. Sophisticated analysis of any issue will reveal the level of priority, the stakeholders, the impact, and how it all interacts with culture and politics. Were we listened to? Was change made? How have doctors and patients been affected? It takes a while to find these things out, but we have to decide objectively if advocacy has resulted in improvement then try again.

The AMA has to be both reactive and proactive and also agile enough to respond quickly when the issues arise. All this on a limited budget, which is why our businesses must also be run professionally to effectively support our underlying aims.

MF: Assuming that Voluntary Assisted Dying was one of those issues, are you content with the outcome?

AM: We aren’t finished with that one yet, in the sense that the impending implementation of the Act has both risks and opportunities. However, we were listened to and we can now continue to discuss with doctors and represent the views of those who will be directly affected by its implementation. In many cases that will be Specialist GPs who provide a lot of end of life care. When there are disparate views within the medical community it is important to acknowledge that, and we did. The commitments made to palliative care by the government are an important outcome and will be closely watched and reported on independently by the AMA. MF: Looking towards 2020, what are the issues that pose the greatest challenges for the AMA, specifically, and the membership more broadly?

AM: The increased demand on public hospitals has rendered the construction of new facilities already insufficient. Subacute care – placement for rehabilitation and long-term care – is failing in WA, as in other states. It contributes to ambulance ramping as the problem of access is the ED-to-ward interface, not the ED itself.

GP Medicare rebates are a disgrace, to be frank. They have not moved much since I was working in Marangaroo in the early 1990s. Demonstrating the value of primary care in preventing high-cost, later intervention and closing the loop back to higher GP rebates so that high frequency medicine is discouraged, will not be hard but requires a more sophisticated advocacy than we have managed so far. Charging gaps to avoid high frequency medicine will help in some places, but puts the economic burden on those already doing it tough in many cases.

The culture in public hospitals is on the improve in some, but still all of them can do much better. The problems are a combination of process (eg leave access) and people (clever bullies) and it takes some time to determine which is contributing most.

The implementation of VAD will need to be carefully considered and involve as much direct doctor communication as possible.

We want permanent tenure contracts for our state employees – this will be the sticking point in the new EBA. Some years ago, there was a pay rise, now whittled away, in return for five-year contracts. These contracts have contributed to poor cultural practices and facilitated bullying in some places. All other states have tenure and similar pay, so we want the same deal as a way of improving culture.

WA could be a medical hub with our unique ability to fund medical research. If we can fix the morale problem, and putting clinicians in control of their own destiny again, then we can make it a great state in which to start and complete a medical career.

MF: The current bushfire dilemma has put climate change firmly in the centre of the national debate. The AMA has formally recognised climate change as a health emergency. In what ways will the AMA make that recognition tangible?

AM: The AMA will advocate and facilitate members to do all sorts of things on climate change. We are confident in backing the science on this, as we do on vaccination. When the CSIRO, BoM, Academy of Sciences and universities state the case as clearly as they have, we have no problem accepting that. It is a public health issue and therefore very high on our agenda along with all the social determinants of health.

MF: The WA branch of the AMA heads into 2020 with a new CEO, what does this new era promise to bring its members, specifically, and the WA health sector, generally?

AM: The AMA is having a reboot in WA and federally, with a new CEO there as well. It is a time of great change building on the good things we have, and reminding all doctors that the AMA belongs to the whole profession. It has incredible influence and its independence is very important at a time when the media is increasingly partisan. The AMA is a general forum for members to express, argue, resolve and advocate. Even when we have differences, it is essential we stick together to advance the cause of science and medicine.

For individuals, the AMA (WA) is a union that can go into bat, not just with an employer, but in many circumstances where doctors tend to run into trouble. Along with medical indemnity insurance the AMA membership is an important (and relatively inexpensive) piece of risk management.

MF: Membership to almost all professional and industry groups has been under duress for the past decade. How do these groups, and AMA in particular, earn their relevancy for current members, and attract future members?

AM: I am very positive about the future role and membership of the AMA. We have to continue to make it more representative of the profession in all respects, and continue advocating for health and for doctors.

It resonates with all doctors when the AMA emphasises issues of professionalism and the primary role of science, so there is much that unites us. The Doctors-in-Training will lead the way on membership. Combining the organisation’s corporate knowledge and their enthusiasm, the AMA will be a force for good in the medical and wider community

MF: What is on your health system wish list for the coming year?

AM: Improved culture and permanent contracts for public system doctors.

The adoption of a single employer, a career agency, by Health in WA would reduce so much transactional cost, stress and uncertainty for doctors. We know we need doctors for the long haul so we should be offering cradle-to-grave support with the deal being: we will help you and employ you throughout your medical life, if you come dedicate yourself to the WA Health system. Reducing duplication of mandatory modules would be a good place to start.

A better approach to the methamphetamine issue, with consideration of all harm reduction and rehabilitation methods being apolitical. The recent WA parliamentary report is a valuable place to start.

Banging some sense into the metaphorical heads of the MBS Review.

Implementing VAD in a safe, equitable and workable way that listens to the patients, families, GPs and others who actually care for the dying.

Avoidance of more IT mega project waste.  I believe there will be a temptation for governments to listen to the multinational spruikers of AI who promise that a massive investment in deep data will solve their health system problems and reduce reliance on doctors. It won’t.

Positivity from the AMA. We will fearlessly point out problems and nonsense, but follow up with solutions.