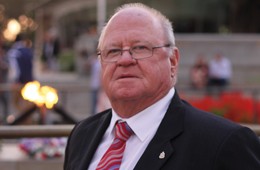 It’s been a life well-lived for Graham Edwards AM. The former State and Federal Labor Member of Parliament and current President of the WA RSL has an ongoing passion to serve his community. It’s an impressive track record for someone who left school at the age of 15 and lost both legs to a landmine in Vietnam. “I was very fortunate because a lot of blokes in those circumstances didn’t survive. I was in a world of pain when the mine exploded and there was the added danger of the downdraft from the rescue chopper setting off a stick-mine.”

“The emergency medical treatment I received was first-class and gave me the gift of life, a second chance. I came back from Vietnam with a new outlook, every day was a bonus and I was determined not to waste that opportunity. It gives me a lot of satisfaction to confront challenges. I don’t think anyone should be measured by their disability.”

Primitive rehab of the past

There were plenty of challenges during Graham’s rehabilitation, none more so than when he was admitted to a repatriation hospital in Heidelberg, Victoria.

“It was probably the most demeaning time of my life. They fitted me with artificial legs and every morning I was picked up and taken to what was allegedly a rehabilitation centre. I soon discovered it was actually a place for people with learning difficulties. I was very pleased to leave and come back to Perth.”

“I wore artificial limbs for about seven years but they were heavy and cumbersome. I couldn’t walk down a steep slope and when I swung a golf club I’d fall over. They were held on by suction and very painful where they rubbed on the stumps so I decided to ditch them, despite one doctor telling me I’d be ‘socially incomplete’.”

“I remember one day my wife said that the gutters needed cleaning so I climbed up the ladder, slid along on my bum and removed all the leaves. I couldn’t have done that wearing the legs so I decided to give life in a wheelchair a crack. It was the best decision, in terms of my rehabilitation, that I ever made.”

“The artificial limbs seemed to make my phantom pains worse, too. I found that some doctors were highly sceptical about that, despite the fact that I was having incredible pain in my right stump and could actually ‘feel my toes’ cramping. I saw a specialist who knew exactly what the problem was, he operated and the relief was immense.”

“In 2005 I was asked to speak with a young bloke who’d lost his legs in Afghanistan and I was amazed by the changes in artificial limbs.”

As Graham points out, there’s been a distinct improvement in the treatment of returned service personnel.

“Some of the blokes who came home from WWI spent the rest of their lives in psychiatric institutions and their problems with loneliness, alcoholism and suicide are well documented. It was a horrific time for them, and their families.”

“One of the positives that came out of the Vietnam era was the fact that it gave mental health issues a higher profile and forced both the government and the ADF to recognise PTSD and do something about it. The Defence Department and Veterans’ Affairs are working much better as a team but there’s a long way to go. A lot of people are still falling through the cracks.”

“The redeployment rate is decreasing for Special Forces soldiers in Iraq and Afghanistan and, I think, when the lid comes off some of the psychological issues, we’ll see more people coming forward and asking for help.” Australia as a country, suggests Graham, has punched well above its weight in armed conflicts a long way from home.

“For a relatively young nation we’ve lost a large number of young men and women in foreign countries fighting other people’s wars. The current total stands in excess of 100,000 lives with many thousands more injured and maimed.”

“That record notwithstanding, I’m no fan of rampant nationalism. It scares me, particularly when you see people wrapping themselves in the Australian flag and shouting slogans. It makes me think of Germany in the 1930s.”

Graham has some interesting insights into both overt and more subtle issues surrounding disability.

“Perth, as a modern city, is not too bad when it comes to being ‘disability friendly’. The biggest barriers are attitudinal and some years ago I experienced that myself. I applied for a promotion, I knew that my skills were well-suited to the position but I was unsuccessful. After a few discreet enquiries I learned that the panel felt I might struggle negotiating stairs and corridors. I felt that was a pathetic reason to exclude me so I appealed and got the position.”

Graham turns 70 this year and the WA RSL is a work-in-progress.

“I’d like to ensure that the RSL fulfils its potential. Membership is increasing, we’re working hard through the sub-branches and we’re using social media to tell the story of what we do.”

“The modern RSL isn’t just a bunch of old blokes sitting in a bar embellishing war stories. We’re vitally interested in the welfare of veterans.”