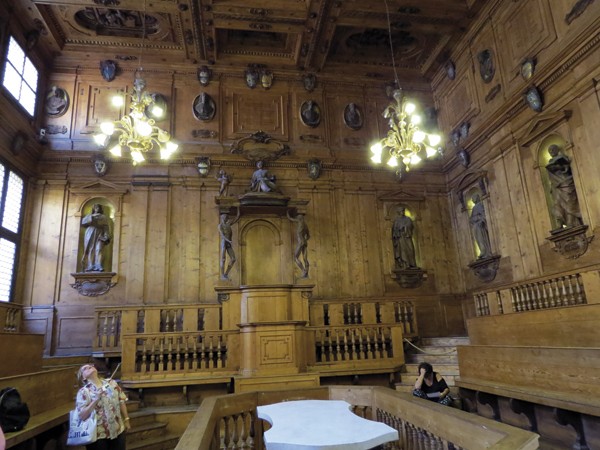 The Good Life of Bologna

Bologna is known as “la grassa” or “the fat one” because of its reputation as the home of fine produce such as parma ham and parmesan cheese and the origin of classic Italian dishes such as “ragu” (bolognaise sauce) and “tortellini in brodo”, basically tortellini pasta in a rich beef broth.

It is certainly less-frequented by tourists than Florence or Venice and perhaps this is why it feels more like “real Italy”.

It has all the essential elements of an Italian city with Neptune’s fountain in its central piazza, bordered by renaissance buildings and outdoor cafes.

The Duomo could have been as beautiful as the Duomo in Sienna, except that the money ran out and the lovely pink and cream marble clads only the lower half of the building.

When we visited in July last year there were free screenings after sunset at the outdoor cinema in the piazza. The Bologna streetscape is visually appealing because of the warm colours of the buildings – terracotta, red and yellow – as well as the covered colonnades, which shelter pedestrians in inclement weather.

The University of Bologna is the oldest university in Europe, having been founded in 1088 and the university district is still one of the liveliest parts of the city. We wandered through the university precinct and enjoyed reading street names such as Piazza Giuseppe Verdi, before stopping for an open air lunch of pizza and Italian beer.

The anatomical theatre in the former school of medicine near the Duomo is a must-see for medicos. It features carved spruce panels on the walls and ceiling, seating for students in galleries on three sides and a rostrum for the professor on the fourth. In the centre is the marble autopsy table. Piazza BolognaThe theatre was commenced in 1636 and took a hundred years to complete. Particularly interesting are the sculptures of physicians which stand in niches around the room, including one examining a dissected nose.

Some of the university’s famous alumni include Dante, Petrarch, Thomas Becket, Erasmus and Copernicus. In more recent history, Luigi Galvani, who discovered biological electricity, and Guglielmo Marconi, the pioneer of radio technology, also worked at the University.

If you are interested in classical music and the origins of modern musical instruments, Bologna is a hub having been proclaimed in 2006 a UNESCO City of Music.

I recommend a visit to the International Museum and Library of Music. The displays are thoughtfully arranged and the audio guide is excellent, featuring biographical information on composers and excerpts of their music. Bologna is small enough to stroll around in a day or two, but take three and enjoy a long lunch.