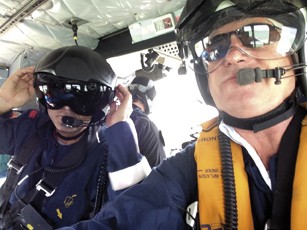 Three years living in a tropical paradise gave Dr Wynand Breytenbach some rare insights into the vagaries of medicine and convinced him that stepping out of a comfort zone was a really good idea.

“Life on Thursday Island (TI), the capital of the Torres Strait group, is vastly different to the one most of us know on the Australian mainland. It’s the smallest inhabited island in the region, home to around 3500 people and only 3.5sq km,” he said.

“It gets hot at times but when you’re working in an air-conditioned hospital, your home is cool and there’s plenty of outdoor fun like fishing, diving and sundowners on the verandah, it makes for pretty enjoyable living. That’s how my wife, Elmarie, and I spent three glorious years beginning in 2013.”

The climate might be wonderful for late-afternoon sundowners but it’s not always conducive to promoting good health outcomes.

“When a nurse rings to tell you that a patient’s BSL is 26 and you say, ‘that’s not too bad’ you know you’ve been in the Torres for a while. Diabetes is rife and, coupled with an environment that basically acts as an incubator, the rate at which a patient can enter septic shock is astounding. It’s the full gamut, scrub typhus, melioidosis, necrotising fasciitis and septicaemia.”

“Adding to the difficulties is the fact that the people are highly religious and this translates to wonderful family values but it also means that many of them are reluctant to take their prescription medicine. They make it quite clear that ‘God will look after me!’”

But ss Wynand suggests, he did some interesting health care providing himself. “There’s no border control between the islands and PNG, mainly due to the fact that they’ve been trading with each other for centuries. A treaty exists stating that we’ll manage any life threatening diseases so when they come over in their dinghies with everything from Potts disease to spear wounds a TI doctor is exposed to an amazing range of ailments.”

“Two incidents spring to mind, one was a young female patient with severe abdominal pain. She had a palpable mass the size of a 20-week pregnancy, cystic on ultrasound. After I removed it under a GA she was very grateful.”

“The other one involved a few mates and a late night. One of them fell asleep in some tall grass and the next day the others hopped into a four-wheel drive and went to look for him. They ended up driving over him and he needed bilateral intercostal drains and ventilation. The RFDS arrived 10 hours later and CT confirmed 23 rib fractures but no sign of cardiac or solid organ injury. I’ll never see a flail chest like that again!”

“I’d have to say that medical services in the Torres are of a high standard. Consultants and registrars of every major discipline visit regularly and patients are flown in from the outlying islands. Some are transferred to Cairns and all transport is by air – including the ambulance! It’s no surprise that the monthly travel budget is astronomical!”

Stepping out of the comfort zone and into a tropical paradise is all well and good, says Wynand, but some things never change.

“I’m sure everyone will be pleased to hear that bureaucracy is alive and well in Far North Queensland. I was sent to retrieve an acutely ill patient who rapidly deteriorated due to septic shock. He was hypotensive, GCS of 6/15 with acute renal failure.”

“I escorted him on RFDS to Cairns Base Hospital and handed him over to the ED physicians three hours later. Four months later, I received a letter from RFDS Queensland to let me know that I’d been granted ‘limited credentialling’ to render assistance on their aircraft between 1330 and 1730 on the day of the incident.”

Experience of a lifetime For any doctor thinking about shifting career gears, Wynand gives an unequivocal thumbs-up!

“A highlight for me was delivering babies, and some of those belonged to colleagues. On one occasion my wife and I were asked to be godparents!”

“We became friends with many people – locals and visitors – had amazingly wonderful experiences and would recommend an adventure such as this to any colleague who feels a little trapped by their daily routine.”